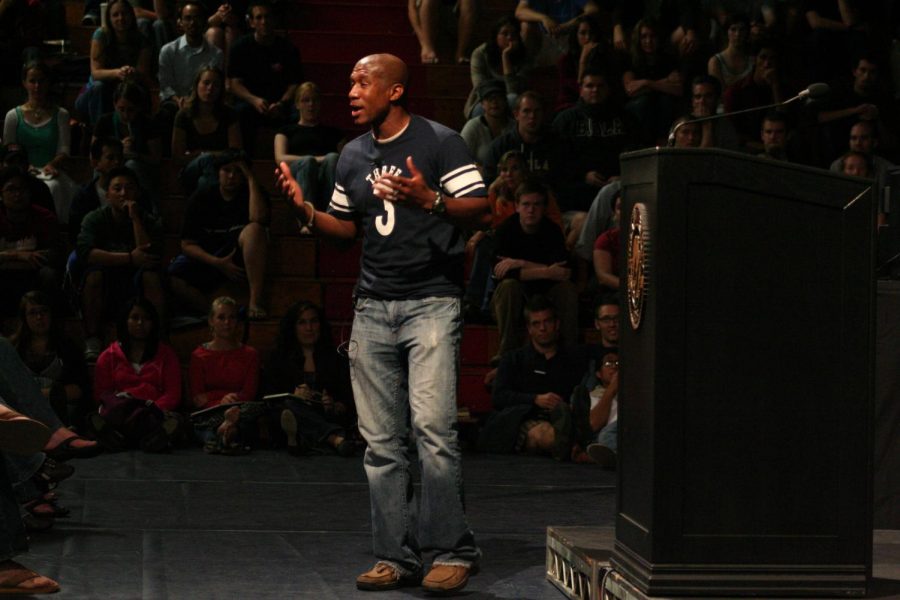 Curtis Jones shares a spoken word act with the audience. His poem told the story of the prodigal son and a "love divine, that turns my water into wine."

Secularism is moving God away from the center of our lives, and Christians can struggle with this too.

Session 2: The story of David and Bathsheba “We strive to be holy not because we’re afraid of what our Father will do to us, but what [our sin] will do to our Father (grieve him).” — Jill Briscoe

How do we avoid “going up to the roof” like David did and falling into temptation? We fight against LAZINESS and SELF INDULGENCE.

Session 3: “God caught us ON PURPOSE and FOR A PURPOSE. Our mission is to find out, ‘God, why did you save me?'” — Bryan Loritts

Philippians 3:12 — Not that I have already obtained all this, or have already been made perfect, but I press on to take hold of that for which Christ Jesus took hold of me.

Session 7: Biola student Curtis Jones shared a poem before Francis Chan spoke. Below is the text of the poem, entitled “Water to Wine.”

WATER INTO WINE By Curtis Jones

No hangovers, in the morning, no regrets I’m feeling fine,

If I put it in rewind, I can remember a time,

When I longed for the food that they’d only feed to swine,

Coming to my senses I wept and I cried,

I’ve completely gone astray, who can deliver me from this grind?

Memories of my father vividly came into mind,

Oh, I’ve really blown it now; I truly messed up this time,

Could he ever forgive me for how I’ve hurt him deep inside?

Death is the reward for every treasonous crime,

Still, I have, nothing to lose; if I stay, I’ll surely die,

Yes this will be, the day, that our paths will surely collide,

The faithful and, the faithless, of which, I’m the latter side,

I’ve sinned against you, and heaven, and I was full of pride,

I wanted to master, my destiny, and be my only guide,

Now all I have, is shame, for I, was following, a lie,

Between a rock and a hard place, my hands and feet are tied,

I don’t know if he’ll accept it, but at least I have to try,

Just then, his words came with power, in a cheerful rhyme,

Reminiscent of his vineyard, I had my own grapevine,

Access to the garden, it was mine all mine,

A taste of heaven on this earth, by his very own design,

It was humble, but it was home, compared to here a paradise,

Deceived in my thinking, drawn away, and enticed,

But the goodness made me rise and leave this crazy mess behind,

The journey went so quickly, I barely rehearsed my lines,

How could I explain the shifting of the paradigms?

Suddenly, a long way off, my eyes met his eyes,

His heart was full of compassion and he dropped all his pride,

He ran out, and embraced me, and he wept, and he sighed,

For you my son, once were dead, but now you are alive,

Let’s celebrate to commemorate this joy that is a sign,

Of majesty and royalty, being poured out from on high,

Love like I never knew it, it was, of a different kind,

I couldn’t even earn it, I hadn’t apologized,

He said, father, my younger brother, is a thief, in a disguise,

And, everything he does, is pulling the wool, over your eyes,

He took half of your fortune, brought back, less than a pair of dimes,

Has the nerve, to come back home, and you award him, the grand prize,

Wicked plans, against this family, I never have devised,

Still, I get no royal treatment, like he, with whom you empathize,

Son, everything, I have is yours, you must realize,

But this I’ve said before, and I must truly emphasize,

This brother of yours, was drowning, I will help him to arise,

This brother of yours, was lost in darkness, now he has arrived,

This brother of yours, was dead in sin, but now he is alive,

I’ve forgiven him, of his sins, so that, he could be like Christ,

This brother of yours, was crippled; but no longer paralyzed,

Listen to this saying, that tastes much better with time,

Pouring out from Him that turns my water into wine.