The Eagles scored the first game in the double header 1-0, then lost with a score of 2-6 the second game. 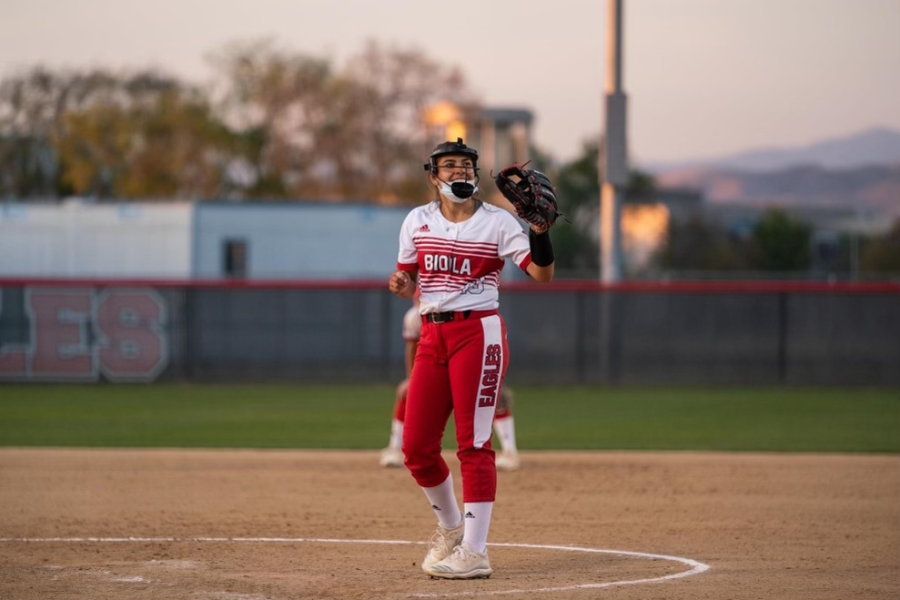 On March 21, softball played a doubleheader at home against Hawaii Pacific University, winning the first game 1-0 and losing the second 2-6.
THE ONLY RUN
Senior right-handed pitcher Paige Austin made history on Freedom Field, achieving the first seven inning no-hitter of her career. Austin kept the Sharks off the field of play with seven strikeouts. This was her third shutout of 2022.

For the majority of the game, neither Biola nor HPU were able to score runs. The first, second, third and fourth innings showed no points for either team on the scoreboard.

At the bottom of the fifth and still needing runs on the board, junior outfielder Sicili Brittingham was first to bat. She came through with a base hit to left field. Freshman utility Hailey Paull completed a sacrifice bunt, putting Brittingham in scoring position. Sophomore right-handed pitcher Raylene Roybal connected bat to ball for a base hit. Brittingham capitalized on the opportunity, scoring the only run of the game.

Unable to add more runs, the score stayed at 1-0 for the remaining sixth and seventh innings.

The Eagles beat the Sharks 1-0.
COULD NOT DELIVER
Two hours later in their second game, both teams seemed to be replicating the prior game with no runs scored until Biola scored the first run at the bottom of the fourth. Junior outfielder Jennifer Morinishi singled through the left side and stole second. Sophomore infielder Kaitlyn Hawkins singled to center field, allowing Morinishi to earn her run.

The Sharks beat the Eagles 2-6.

Softball (12-11 overall, 7-7 conference) is staying home to once again face off against Hawaii Pacific University on March 22 at 2 p.m. and 4 p.m. Footage and stats from the game are located on the Biola Athletics website.