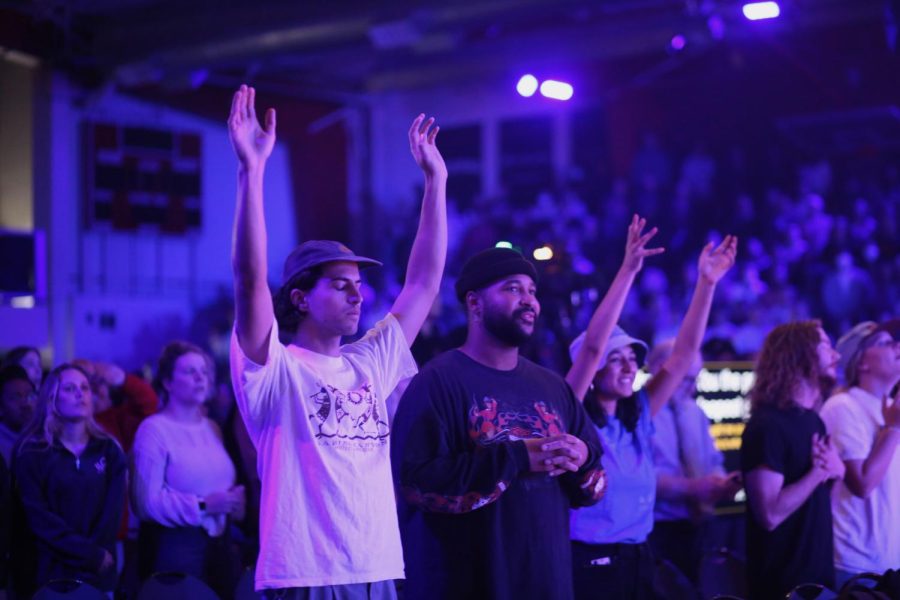 The 91st Missions Conference launched today, with lines for the gym stretching back to the bell tower. As the main session filled up, students were directed to overflow locations: Sutherland Auditorium, Mayers Auditorium, Calvary Chapel and Lansing Recital Hall.
SESSION ONE
Missions opened with the parade of nations. Students cheered as flags from numerous nations were run across the gym floor, while some students booed as the Russian flag passed across the floor. As the parade concluded, Missions co-directors Nicole Chang and Cy Bryan took the stage. Bryan opened the conference and reminded students that we have Christian brothers and sisters in Russia, who we should continue to pray for.

This year President Barry Correy honored Luis Palau posthumously for his evangelical service with the Charles W. Colson Conviction and Courage Award. There to receive the award were Palau’s wife and one of his children.

Stuart’s message centered on expectations and frustrations of not knowing God’s plan. Stuart zoomed out on the life of Jesus by putting it in historical context and outlined the events that conspired in order to make Jesus’ life and ministry perfectly timed. Stuart explained that we often do not know the way God is working in our lives before it happens. Stuart hoped to encourage students who are in school during this season of nearly constant change.
SESSION TWO
The second session opened with two student speakers. Music and English double major Evan Dickerson shared his testimony surrounding cross-cultural interactions on campus. He shared his fears and hopes to bring people together to be more welcoming of other cultures. He reminded students that before they are Black, white and Asian, they are God’s people.

Senior commercial music major Isaac Escamilla shared his thoughts on having an open mind about other cultural forms of worship. He acknowledged some people may feel uncomfortable in the presence of other worship forms and that they should ask God to help them keep an open mind.
MAIN SPEAKER
The main speaker for this session was Cru staff member Jamie Lam. She read from Nehemiah 1, speaking about human response to corruption in the world. She questioned whether indirect brokenness calls Christians to action or causes apathy.

While a normal response to an issue is to figure out ways to fix it and pray throughout, Nehemiah’s response was to sit, weep, mourn, pray and fast for days or months before taking action. He prepared the Israelites and himself for God’s work, allowing himself time to consult God.
SESSION THREE
The line for the gym for Mission’s Conference main session three wrapped around to the bells with many students redirected to overflow. Session three opened with Student Missionary Union president Sadie Wilson and Artuso explaining SMU’s mission. Isla Vista followed them up, leading the Biolans in a time of worship before main speaker Next Gen Regional Co-Chair for North America with Empowered21 Eli Bonilla came to the stage.
BEHOLD HIM
Bonilla began by explaining cultural background. As a Dominican-Mexican, he grew up with two different dialects of Spanish intermingled with the “TexMex” Spanish he learned in San Antonio, Texas.

Bonilla explained that the church needs to know the Word of God so deeply that it cannot be swayed by Satan’s lurking power. He referenced how Satan used God’s words and twisted them to deceive Adam and Eve.

“We don’t want to step into something that will be a stumbling block for the next generation,” Bonilla said.

Bonilla explained that Christians struggle with a limited understanding of God. They do not read their Bibles as they should, rather they go to the “Bible-verse-a-day” Instagram accounts to get their “daily dose” of the Bible.

“We perish from a lack of knowledge of God,” he said.

Bonilla ended the session with the truth that God has a sovereign plan for the people he created. Instead of experiencing disarray and discontentment, at the throne of God, Christians will be united with Christ, exemplifying their differences in him.
SESSION FOUR
Biola students brought excitement the second morning of Missions Conference, as the MC’s announced the speaker, Megan Fate Marshman. She currently works at Arbor Road church, but has a history of speaking at camps and conferences around the nation. To celebrate the theme of international cultures, international students sang “Here I Am to Worship” and “May His Favor Be Upon You” in many languages, beautifully translating the verses in the songs, but uniting the song during the chorus in English.
THE MESSAGE
Marshman spoke on Matthew 6, encouraging the audience to set their minds on the things above by “storing up treasures in heaven.” This perspective, she said, leads to both peace and unity, as the focus shifts from the things that are seen to the things that are unseen, that is, heaven.

She tied it back to the theme verse in Nehemiah 5, pointing to the disunity that resulted from the people’s focus on their resources. Landing it on the gospel message, Marshman ended by powerfully reminding the audience that Jesus’ treasure is the human race, bringing home the gospel message. Isla Vista worship ended the session by singing “You are my Treasure.”
SESSION FIVE
The 91st Missions Conference entered its second day. When the main session in the gym filled up, students were directed to overflow seating in Mayers Auditorium, Sutherland Auditorium, Lansing Recital Hall and Calvary Chapel.

Mock’s message focused on worshiping Jesus and cherishing the Word of God. Mock encouraged students to consider whether they were worshiping God as Scripture portrays him or praising a god of their own imagination. He explained that when a person is consumed with themselves, they cannot rightly treasure God and his Word.

Mock pointed to Ezra as a leader who was consumed with God’s greatness instead of concentrating on his own status. He encouraged students to ground themselves in the truth of Scripture rather than trusting in themselves and their feelings.

Mock shared stories of believers in Ukraine worshiping God through prayer and song in the midst of war. He detailed the devastation throughout Ukraine, including bombed villages as well as the lack of water in Mariupol. Mock explained that as believers worship God in the midst of suffering they look forward to a day where there will be peace instead of destruction.
SESSION SIX
Session six began with a reading of the scriptures in a variety of languages—from Korean to French, Greek to Spanish, and more. Applause burst out from students in between as they listened to the same passage read in different tongues. Isla Vista Worship jumped on and led the crowd in singing “Face to Face.”

Ben Stuart was the main speaker for the session. He read from Genesis 1 and 2—challenging students to find their purpose and presence in God.

“The terror of meaninglessness haunts your generation,” he said. We were created for a purpose, Stuart taught, and God put us on earth for a reason.

Stemming from purpose, Stuart exhorted students to “go into the chaos and cultivate life” as Jesus did on the cross for us.

“Christ stepped into the chaos and created a kingdom…to set you free,” Stuart said.

Stuart encouraged students to “uproot and plant” themselves—as they cultivate life, beginning with working on themselves. He explained that there are four crucial pillars to this: a productive schedule, a positive structure, protective saints and the power of the spirit. With the spirit of God coming into our mess, there is hope for us.

Isla Vista Worship ended the night with extended worship—worship that reminded students that “Jesus paid it all—all to him [we] owe.”