Women’s basketball falls short against the Academy of Art

The Eagles put up a fight against the Urban Knight but lost from a lack of consistency. 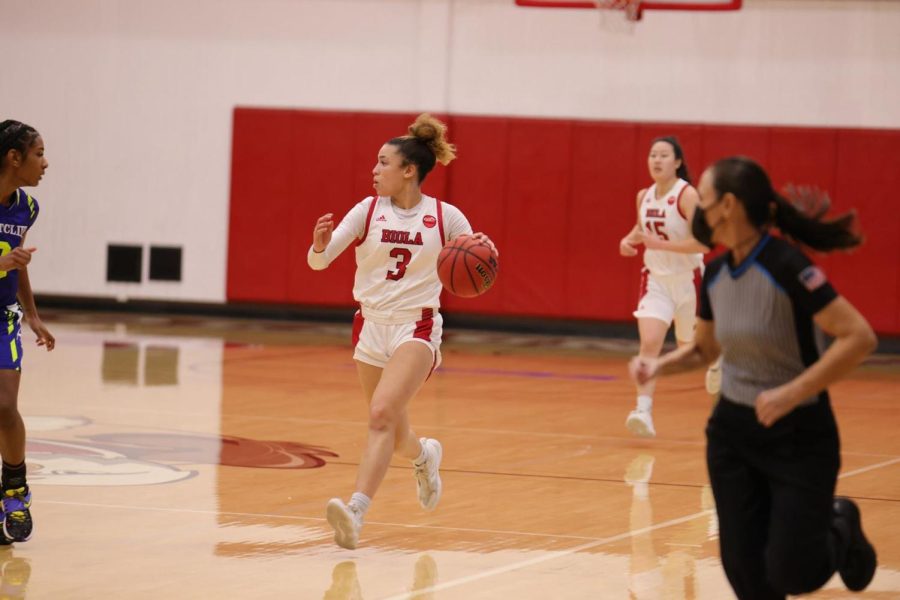 Though the Eagles put up a fight against the Academy of Art University Urban Knights on Thursday, they ended the game with a loss, 83-61. The Eagles held their own at the free-throw line, shooting 72.7%, but lacked offensive efficiency and scored low on their field goals and 3-pointers. However, the Eagles managed to edge the Urban Knights in the paint, scoring 28 points close to the basket throughout the match.
STRUGGLE TO MAINTAIN THE LEAD
Freshman guard Amiah Simmons scored the first three points of the night and led the Eagles, scoring 13 points throughout the match. Only one minute later, redshirt junior guard Aysia Johnson made a fastbreak in the paint to score a layup for the Eagles. However, the Urban Knights returned Biola’s offensive efforts with a relentless defense, capitalizing off of Biola’s mistakes by scoring 30 points off turnovers throughout the game. The Eagles entered into the second half with a 10-point deficit, 26-16.
TRAILING THE URBAN KNIGHTS
In the second half, sophomore guard Natasa Radovic blocked shots and captured defensive rebounds, playing a well-rounded game by also leading the Eagles with a total of 13 points. Redshirt sophomore guard Stephanie Lee followed close behind with 12 points, attempting 3-point shots to catch the Urban Knights in the fourth quarter. However, the Urban Knights ultimately took the victory, 83-61.

The Eagles (10-6, 6-3) will be back on the court on Jan. 28 at 5:00 p.m. to take on the Chaminade University Silverswords at Chase Gymnasium. Footage and statistics from the game are located on the Biola Athletics website.