A backstage look at Pirates of Penzance

The Biola Opera is coming to the Conservatory for a long overdue show. 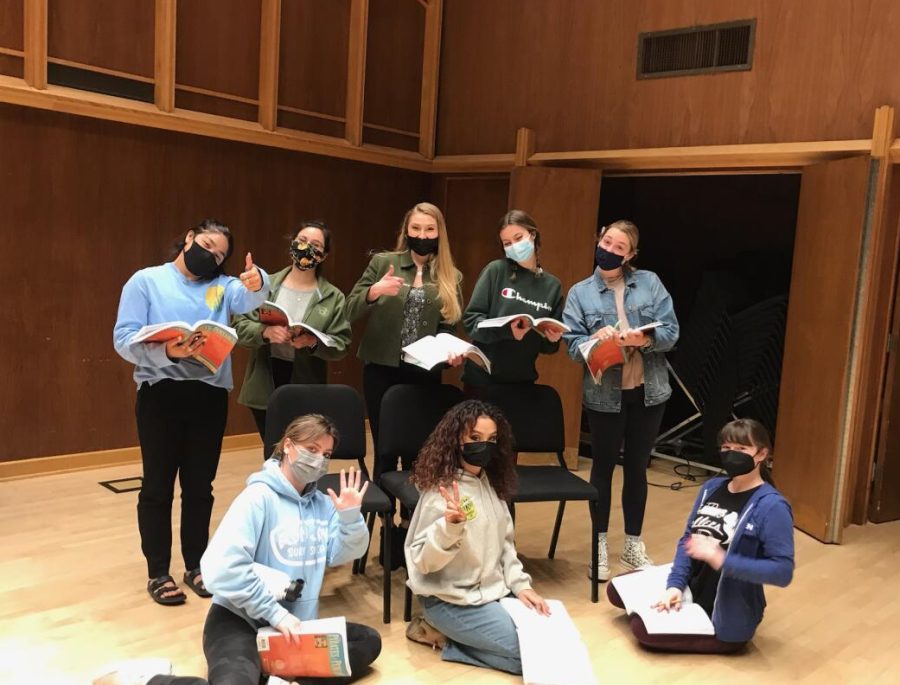 The "Pirates of Penzance"cast gather for a rehearsal.

This spring the Conservatory will finally host their opera performance, open for one weekend only. “Pirates of Penzance” will hit the theater stage with an exceptional cast.
STORYLINE
“Pirates of Penzance” follows a young man who is a “slave to duty” until his 21st birthday. After completing his indentured servitude to a band of pirates, he vows to exterminate them. However, since he was born on a leap year, he must serve another 63 years. During his time, he falls for a young woman named Mabel and waits to be reunited with his love.

Conductor Marlin Owen and Voice Area Coordinator at the Conservatory Jeanne Robinson held auditions at the end of September 2021. Due to the uncertainty of COVID-19 restrictions, casting was prolonged. Roles were double casted in case members tested positives. Psychology doctoral student TJ Mundy-Punchard and college alumnus Ray Machen-Gray play Frederick. Alternately, junior accounting major Lydia Tkach and junior music performance major Maddie Jorfensen play Frederick’s love interest, Mabel.
Q&A WITH THE CAST AND DIRECTOR
In a Q&A, Robinson and Tkach give some insight into the show:
Q: How did you come up with the casting leads?
Jeanne Robinson: We needed to cast the best singer actors that we could, as acting skill is very important in G&S operettas. We did not have enough men to cast all the Pirates and Police so we put up posters on campus and a response to that poster yielded one of our Fredericks, TJ Punchard. We actually just filled out the Police at the very end of last semester.
Q: What makes this performance different from other shows you have done?
Lydia Tkach: This performance is different from other shows I’ve done because some of the leads are double casted. It has been such a wonderful experience to get to play the same role as my best friend, Maddie. We play Mabel in the different casts, and it has been so fun to work on the role together, bounce ideas off of each other and see how we interpret the character differently. I love seeing how we each bring a bit of ourselves to Mabel.
Q: This is your first full in-person show since you were a freshman due to the pandemic. How has that been?
Lydia Tkach: It has been such a blessing to work with the cast in person and do the show. I have enjoyed the process of discovering how everyone acts onstage and learning their beats and how to work as a team to bring the scenes and the story to life.

The Pirates of Penzance will host two matinees and two night performances from Feb. 11-16. Tickets will remain on sale.