The Eagles played strong defense and offense to achieve a victory against Holy Names University, 70-65. 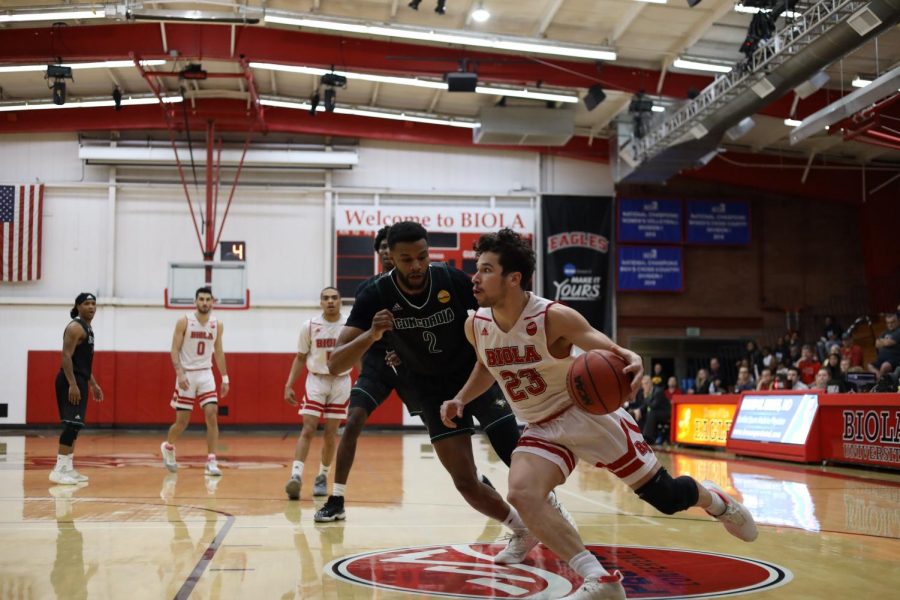 In their second conference game, men’s basketball took a five-point win against the Holy Names University Hawks. Though the game was a close match for the Eagles, they pulled ahead with a five-point lead, resulting in an ending score of 70-65. This puts Biola at 8-1 overall, 2-0 PacWest standing.
WELL-ROUNDED PLAY
The Eagles dominated the court with consistent defense, gaining 33 rebounds throughout the game. Additionally, Biola scored 60 points in the paint—showing an aggressive offense. Redshirt junior guard Alex Wright led the game, recording seven rebounds and scoring 25 points for the Eagles. Redshirt senior forward Michael Bagatourian followed close behind with 13 points, as well as redshirt senior guard Chris Rosow with 10 points.

The Eagles trailed the Hawks by one point at the end of the first half, 35-34, leading into the second half with a competitive start. Within the first 40 seconds, redshirt freshman forward Maximo Milovich scored a basket off of a layup—the first of 36 points in the second half, leading Biola to a victory against the Hawks and another win in their second conference game of the season.

Men’s basketball (8-1 overall, 2-0 conference), will head to the Felix Event Center at Azusa Pacific University to face off against the Cougars on Dec. 11 at 4:00 p.m. Footage and stats from the game are located on the Biola Athletics website.