The Eagles score a 10-point win against Fresno Pacific. 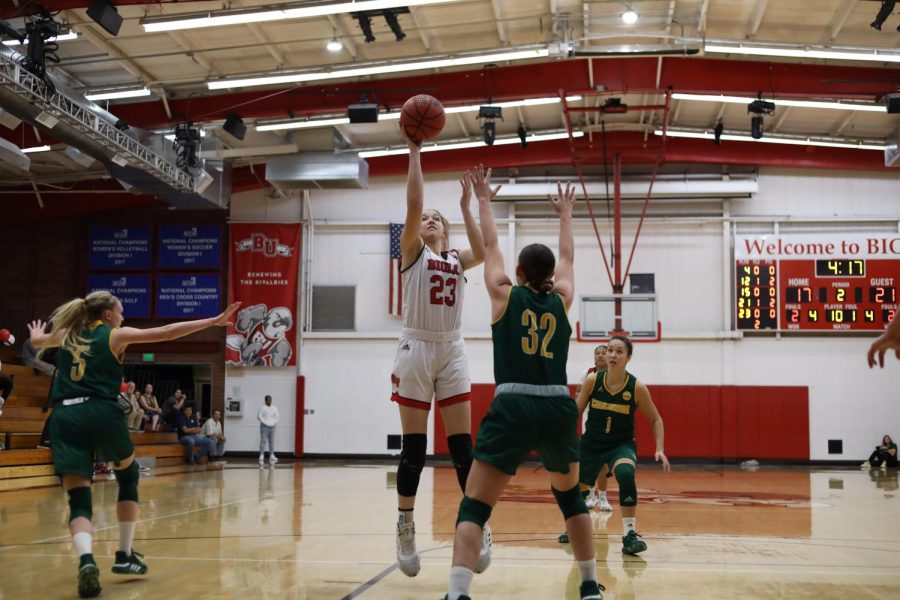 Women’s basketball played their first conference game and championed a 10-point win at home on Dec. 2 against the Fresno Pacific University Sunbirds. The Eagles secured the 58-48 victory over the Sunbirds, dominating the court by scoring 24 points in the paint. This places the Eagles at a 5-2 overall, 1-0 PacWest standing.
THREE POINT BASKETS
In the first quarter, the Eagles shot 60% from behind the 3-point line. Within the first 15 seconds of the game, freshman guard Amiah Simmons scored a 3-pointer to kickstart the game—Simmons scored the most amount of points on both teams, recording 22 points overall. However, the Eagles struggled in the second quarter, scoring only one field goal and trailing 26-21 at the half.
DEFENSIVE CONSISTENCY
Biola’s defense stepped up in the third quarter by only allowing a 30% field goal percentage and 20% 3-point percentage from the Sunbirds. Redshirt sophomore forward Jordan Rabe and graduate student guard Autumn Hopson rebounded throughout the third quarter contributing to defensive consistency. The Eagles entered into the fourth quarter trailing by one point, but pulled away in the final minutes.

Women’s basketball (5-2, 1-0) will face off against the Holy Names University Hawks on Dec. 4 at 2:00 p.m. in the Chase Gymnasium. Footage and statistics from the game are located on the Biola Athletics website.