All three films faced significant challenges in pre-production, challenges that deepened the meaning. 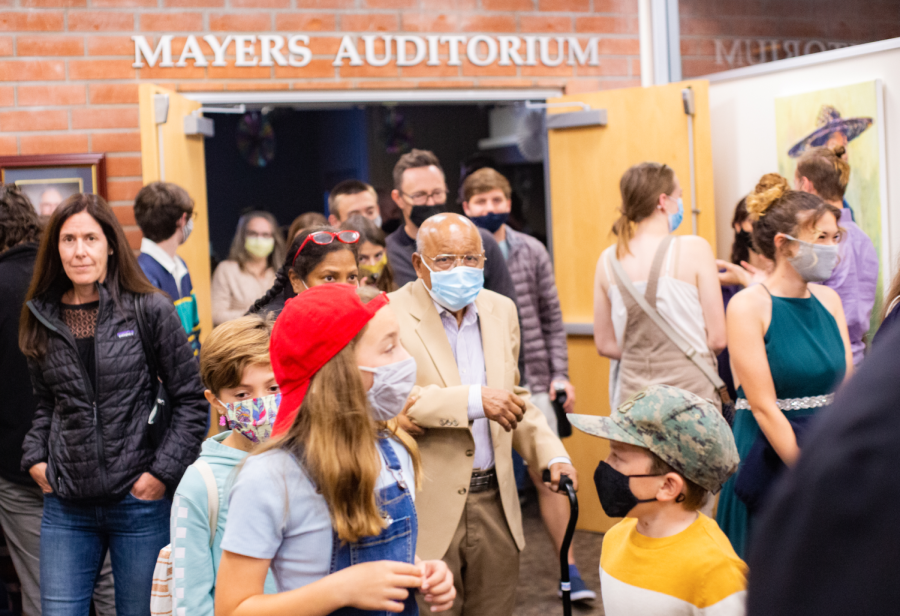 “It was really difficult at times, because I had to keep everyone on schedule,” Douglass said. “I had to direct the movie, tell people where to put things and then I also had to focus on my performance… It was really challenging.”

While Douglass stars in the film, the puppeteering is certainly something to behold. Senior cinema and media arts major Marcel van Verkhoven made three puppets for the film—two sock puppets and one life size puppet that took about three months to construct.

The props clearly make the film—Douglass gathered mannequin legs, a picture frame of Yoda and a puppet that vaguely resembles himself. His next film features some of the same ideas, while working on a different theme entirely: creative freedom. It will feature an animatronic cowboy and a family entertainment center. “Under Refurbishment” will shoot next spring.
“AMELIA THE TWIN”
Directed by Luke and Ethan Montgomery, twin brothers with a knack for storytelling, this film is about a twin seeking to differentiate herself from her twin in any way possible. Though the film is brilliant, professional and well-scripted, the most interesting part about the production process was doubling the star of the film, Emery Gordon.

In order to double an actor, a filmmaker needs to take the same exact shot of the actor twice while using a green screen to double the shot. This requires a very complex dolly, and the Montgomery brothers were on a tight budget. With the help of their older brother, Schuylar Montgomery, an engineering student at USC, they constructed a low-budget dolly that they could program to make the exact movements they needed it to make.

From there, the brothers stitched the film together in post-production to make a convincing appeal for the existence of a twin of Emery Gordon.
“RIDLEY”
Directed by senior cinema and media arts major Justin Lord, “Ridley” is thought provoking and emotional, as compared to the childlike nature of the other two films. This film is about a grad student mourning the death of her sister. When she revisits their childhood bedroom, she dreams her sister Ridley back to life, just for a few moments. Lord said that it was inspired by him missing his siblings all the way back in Texas, a moment many college students can relate to.

Though the nature of the film was less involved than the other two, this production still faced challenges throughout the process of filming. The TV, a central part of the film, would not work during the filming process, so Lord taped over the screen with green tape and hoped they could fix it in post-production. Besides that, post-production proved challenging over the summer with everyone working from different locations.

“Trying to do post production over the summer [was] incredibly hard because everyone goes all across the nation,” Lord said. “And so one guy’s editing it. One guy is doing special effects. One guy’s doing sound and trying to coordinate with all of them remotely, very difficult. So this was filmed in April, [and] it is now November. We finished it minutes before the premiere started.”

“Ridley” was exported about 10 minutes before it showed on the big screen on Saturday night. But truthfully, the audience could not tell.