The Eagles fell to Azusa Pacific, 3-0. 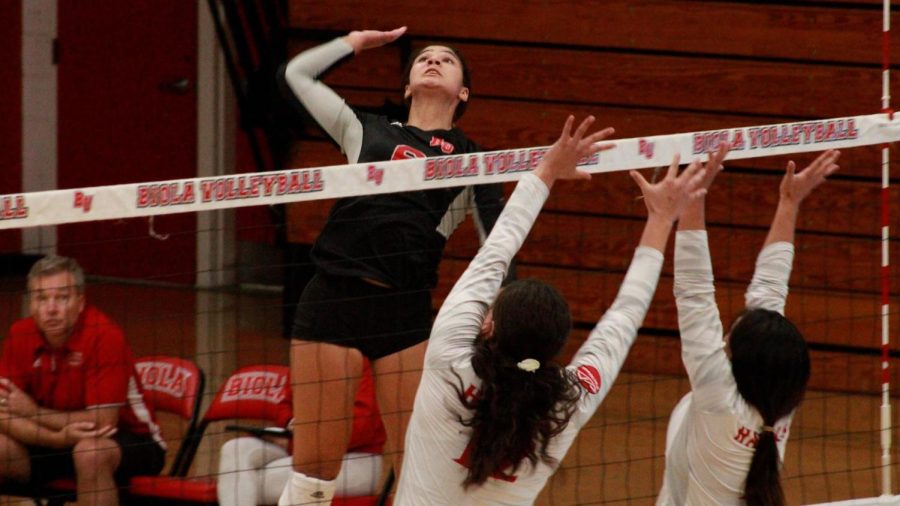 On Thursday, volleyball traveled to Azusa, California to face off against the Azusa Pacific University Cougars. The Eagles were unable to hold their own, losing the first three sets to APU.

The Eagles totaled 33 points, 25 kills and one ace during the match. Redshirt sophomore outside hitter Emily Smith led offense with nine kills and one assist, closely followed by redshirt freshman middle blocker Dani Bryant who contributed four kills and four blocks to Biola’s efforts. Heading up defensive efforts, redshirt freshman libero Mary McDonnell totaled 10 digs and one assist.
THREE SET DISAPPOINTMENT
The start of the first set foreshadowed APU’s three-set victory as they scored the first three points of the match. The Eagles fought back but held the disadvantage for the first 20 points of the match. However, a four-point run briefly placed Biola a point ahead of the Cougars. Ultimately, Biola could not pull out a win, losing the first set, 25-22.

With low spirits, the Eagles were unable to redeem themselves in the third and final set. With only nine total points in the set, the Eagles fell once more to APU and lost the game overall, 3-0.

Volleyball will return home on Nov. 20 to face the Point Loma Nazarene University Sea Lions at 2 p.m. Stats from today’s game are located on the Biola Athletics website.