Anderson .Paak and Bruno Mars team up to revitalize the ‘70s Motown soul genre for the modern day. 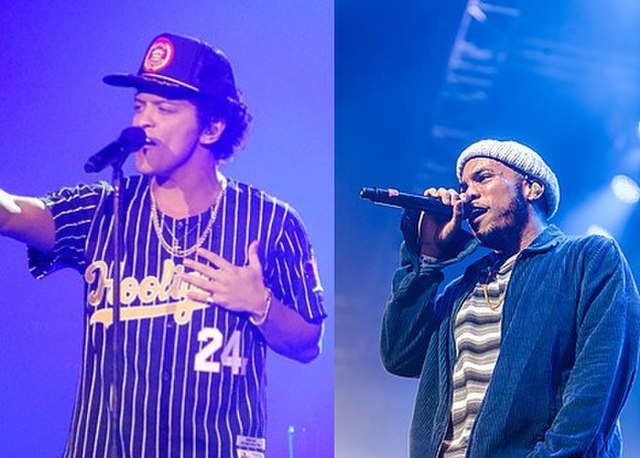 With Bruno Mars’ last album, his turn to old-school R&B made him a perfect candidate for a collaboration with Anderson .Paak. “Leave The Door Open” proved that their new moniker as a duo, “Silk Sonic,” could become a favorite among critics and fans alike. Released on Nov. 12, the duo constructed a short but incredibly sweet collection of tracks that brings listeners back to a bygone era of soulful love ballads and funky dance tracks.

Both .Paak and Mars are important musical icons in their own right. While Mars has put out multiple No. 1 hits since his debut back in 2010, .Paak has become a critically acclaimed rap, R&B and soul artist that has worked with musical greats such as Andre 3000, Kendrick Lamar and many more.
SOULFUL BLISS
Live performance is key to “An Evening with Silk Sonic.” The album’s nine songs boast a diversity of sounds and instruments that shine. .Paak’s drums on lead single “Leave The Door Open” guide the song’s bouncing beat while the bass guitar on “Fly As Me” complements the confident and cool demeanor of .Paak’s lyrical delivery.

In addition to instrumental playfulness, the lyrics and vocals are unabashedly catchy and addictive, not exclusively on the three main singles but every track on the album.

“Put On A Smile” is Mars’ best vocal performance to date, with the use of his entire vocal range punctuating the song’s themes of deep heartbreak. It crafts a bridge that builds up immense musical anticipation by adding another measure with a gradually more intense drum fill and a change in the song’s key. With this greater anticipation, Mars tests his vocal chops and conveys heartbreak to the listener in a unique and refreshing way.

That is just one out of the many moments where Silk Sonic recreates an old-school style of R&B music while revitalizing it with their own unique artistic sensibilities.
CRITICAL REACTIONS
Across the board, this album has become both a critical and commercial success within the weekend of its release. What many outlets fail to fully recognize though is the earnestness, sensitivity and confidence of the lyrical content.

Entertainment Weekly claimed that the duo’s musical persona “lands somewhere between Pepé Le Pew and Ron Burgundy on the self-awareness scale,” which speaks to a general critique of the album’s lyrical content being too pushy and self-centered, a critique that does not hold up on subsequent listens.

While the album’s “loverman” persona is certainly nothing new, .Paak and Mars take that persona into a direction where they come across as confident in themselves and what they have to offer within a relationship.

“Fly As Me” is a perfect example of using confidence in a positive manner, with .Paak and Mars using the song’s verses to tell their partners that they’ll “bring that fire and desire but all you gotta do is meet me halfway there.”

This more romantic side to the confident persona is constantly put more in the spotlight on songs like “Put On A Smile,” “Skate” and “Blast Off,” the latter being the soulfully pleasing end to a consistently earnest and beautiful tracklist.
ALBUM OF THE YEAR
.Paak and Mars crafted a loving tribute to ‘70s soul music while lifting each other on an artistic level to create a definitive showcase of the talents of everyone involved. Silk Sonic is bound to be a must-see act in concerts this season to get the full experience of this duo’s prowess.