After months of anticipation Taylor Swift dropped her re-recordings of the album “Red.” 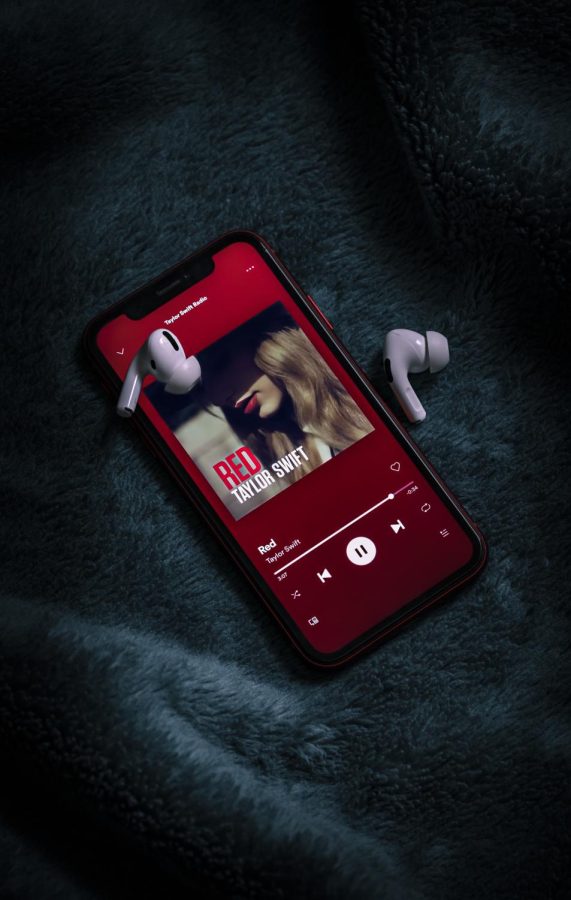 Taylor Swift’s re-recording of the fan favorite album, “Red” dropped at 9 p.m. on Thursday. This 30-track album shares narratives of deep heartbreak and a glimpse of redemption through new beginnings.
WHY RE-RECORD?
In the last two years, Swift released five albums, allowing her to own the rights to her music after a long legal battle with Scooter Braun. Braun purchased Big Machine Records, Swift’s original recording company in 2019. She lost the rights to her music after she tried to buy her old master recordings for Fearless, Speak Now, Red, 1989 and her debut.

Owning Swift’s original recordings meant that anyone who wanted to make a copy of the recording must ask for permission from the owner of the master rights.

As of November 2020, Swift gained permission to legally re-record those albums to take back her rights, adding new songs that were excluded from the original soundtrack in the process.

“In the process I’ve dug up these songs that I wrote along the way that didn’t make these albums,” Swift told Jimmy Fallon on The Tonight Show. “I thought I wanted to save this for the next album, but then the next album would be a completely different thing.”
THE SONG THAT KEEPS ON GIVING
One of the most anticipated songs and Swift’s personal favorite song off of the album was written during a rehearsal for the 2010 Speak Now Tour.

“I was going through a bit of a sad time, and I showed up for rehearsals and started playing the same four chords,” Swift told Fallon.

With 10 to 15 minutes of ad-libbing and guitar strums, the 10-minute version of  “All Too Well,” was born and now the original lyrics were released in the re-recorded “Red” album.

A short film pairs the 10-minute version of “All Too Well,” starring Stranger Things star Sadie Sink and Dylan O’Brien, directed by Swift. It premiered at 4 p.m. on the west coast. The age gap between Sink and O’Brien hints at the short lived romance between Swift and Jake Gyllenhaal, with the lyrics, “You said if we had been closer in age then we’d be fine and that made me want to die.”
THE FUTURE OF TAYLOR
Swift loves using secret codes throughout her songs and campaigns to keep fans wondering what may happen next. From the beginning of the “Lover” era, fans constantly search for hidden messages from Swift trying to figure out what she plans to do next.

Some of the new songs off “Red” give tribute to the “1989” album due to its upbeat pop rhythms which were not in the original sound. Fans speculate that the next album to drop will be “1989.” There are also signs that “Speak Now” will drop soon.  Pop Buzz gives a rundown of potential information on what may happen next.

“Red” is now available on multiple streaming platforms including Spotify and Apple Music.