They Might Be Giants’ ‘BOOK’ maximizes surrealness, pathos and groove

The 22nd studio album rewards listeners with a sensory overload of lyrical and instrumental delights. 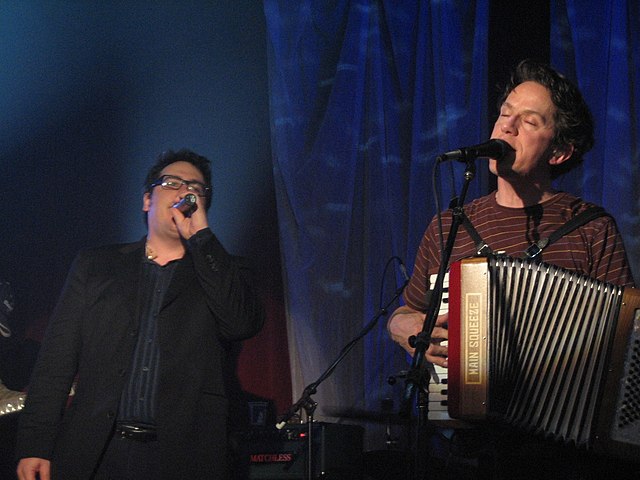 Grammy-winning, Tony-nominated band They Might Be Giants will release its latest album, “BOOK,” on Nov. 12. For nearly four decades, the collaboration between melody-obsessed poetic savant John Linnell and individualistic rock-and-roll master John Flansburgh has enchanted lovers of alternative music.
A BRAND NEW RECORD
TMBG’s typical creative approach is madcap, yet sophisticated. It is generally gleeful, sometimes unsettling and often a dizzying mix of both. “BOOK” exemplifies such a notoriously hard-to-pin-down style—its tracklist never lags, snapping from one genre-bending song to the next.

Right from its start, “BOOK” makes clear that listeners are in for a subversive, irreverent musical experience. Introductory track “Synopsis for Latecomers” frames “BOOK” within an outlandish setup, leaving listeners giddily disoriented about the trajectory of the album.

With its airtight groove and “lose it on the dance floor” subject matter, “Super Cool” has potential as a DJ mix. However, lyrics such as “I hide my face in hyperspace” serve as a reminder that even TMBG’s more poppy, crowd-pleasing tracks are still out of the ordinary in execution and content.

“If Day for Winnipeg,” the most instrumentally eclectic song on the album, adorns a shrill chiptune melody with an exotic percussion section. In a similar vein, “Quit the Circus” opts for a hypnotic, horn section-driven spin on rock-style melodies.

Halfway through BOOK’s tracklist, the baroque-pop “Drown The Clown” returns to nostalgic, familiar sounds from TMBG’s past. In a respite from the album’s more vocally-atypical songs, Linnell and Flansburgh come in clear and booming, backed by warm guitar riffs.
A PLACE FOR THOSE WHO LOVE THEIR POETRY
Throughout the 1980s, TMBG memorably derided the upper class with songs such as “Alienation’s For the Rich” and “Kiss Me, Son of God.” Those anti-elitist themes are still present in “Lord Snowdon,” which uses oxymoronic wordplay to craft a dissatisfied royal’s first-person monologue.

For track number two of “BOOK,” Flansburgh supplies lead vocals to an alt-rock centerpiece titled “Moonbeam Rays.” While the bouncy, smooth-sailing ballad echoes the emotional processes associated with romantic estrangement, its central themes are far more sinister than typical breakup song material. Flansburgh employs a parade of cerebral lyrics such as “you and I are a bonfire,” and “half asleep and brainwashed, I’m shaking off a curse.”

With its shouty, horn-backed rock harmonies, “Brontosaurus” presents what may be the greatest dinosaur-related rhymes in recent music history. Juxtaposing remarks such as “Brontosaurus skin can be so porous” with musings such as “life was devoid of purpose, so I joined the circus,” the song’s tale of “optimism and bad vision” jests with concepts of futility and uselessness.

In “I Can’t Remember the Dream,” Linnell hands listeners a picture-perfect snapshot of the human condition. Pairing a clap-and-stomp melody with lyrics such as “I can’t forget unpleasant thoughts. I want to push them away,” he manages to strike a memorable chord of offbeat emotional appeal.

With its allusions to index fingers and em dashes, “Part of You Wants to Believe Me” presents a stirring exercise in lyrical imagery. In the lilting Linnell lullaby titled “Wait Actually Yeah No,” a saxophone-peppered flow grounds a nonsensical journey of word association, hosting absurd phrase pairings such as “swimming tambourine” and “secret wolverine.”

Flansburgh takes center stage in the vaudeville-esque “Darling, the Dose”—which bursts with lyrical vigor, its description of substance abuse resembling the approach of 1988 TMBG classic “Lie Still, Little Bottle.” Unpacking a gleeful hodgepodge of literary references, “Darling, the Dose” name-drops Socrates and Hercules, and even remarks that “Hamlet’s dad…got it bad.”

Using disappointment-related metaphors, the 15th and final track “Less Than One” concludes “BOOK” with a philosophical tantrum. Lyrics such as “I got 6% of the burrito in my mouth, the rest went in my lap” serve to elicit both laughs and existential questioning—allowing a crescendo of desperation to serve as “BOOK’s” bookend.
LONG-TERM INVESTMENT
To many longtime fans, “BOOK” may recall TMBG’s experimental, horn-heavy “John Henry” album. But the band seems even more confident in their experimentation here. Both Linnell and Flansburgh receive plenty of opportunities to indulge in melodic and lyrical originality.

Even to listeners unacquainted with the band’s repertoire, this album is a treat for anyone seeking a dose of unfettered creative chaos. “BOOK” is textbook They Might Be Giants—but it also turns over a brand new page.

Listen to They Might Be Giants on Spotify here.