Throughout their fundraising and promotion campaign, cinema and media arts students promote freedom of creativity in student features. 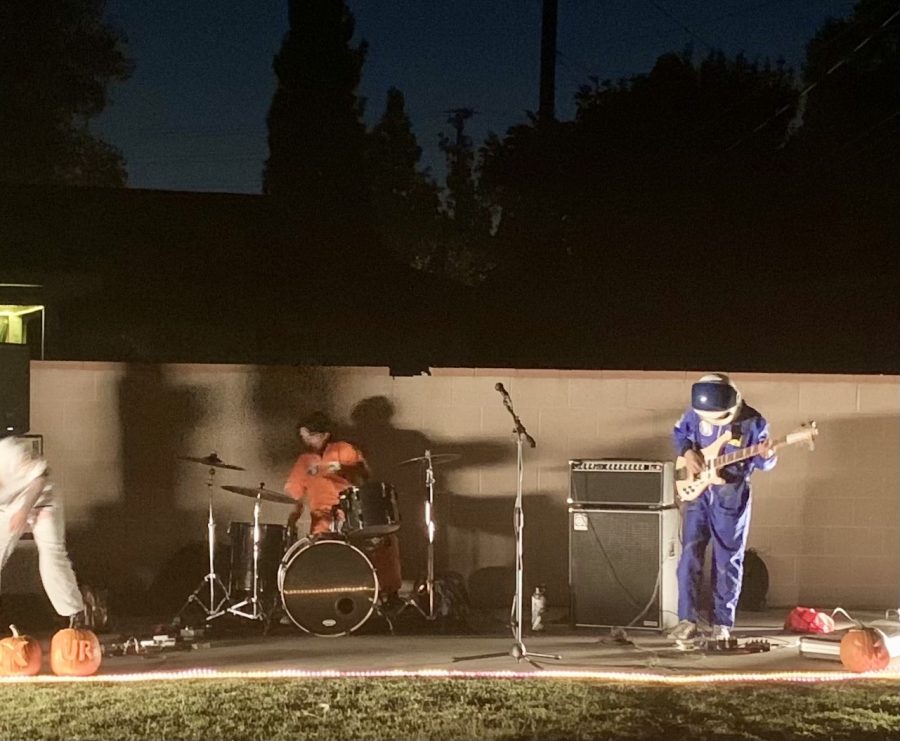 As students gathered for a backyard concert dressed as Star Wars characters and cowgirls on Halloween, senior cinema and media arts majors Holly Chang and Griffin Douglass greeted students at the entrance, thanking them for being “a part of their story.”

For their senior thesis project, Chang and Douglass worked together to create a short film titled “Under Refurbishment” which focuses on the idea of creative freedom. Featuring weekly artists on their Instagram and Facebook accounts, the two created a social media platform aimed to collaborate with fellow artists. Additionally, they hosted a concert featuring Biola alumni and student bands, such as Chico the Band, The Grin and The Dead Novas.

The artist features, as well as the social media initiative, serve as fundraising platforms for their film project. With $32,000 to raise, Chang stated that the artist features allow people to donate to their film project while supporting other artists.
SARSAPARILLA SAM
In relation to promoting creatives, the short film addresses the freedom of creativity and expression. Douglass explained that the film includes an element of artificial intelligence, starring “Sarsaparilla Sam”—an animatronic cowboy who desires to express his own creativity.

“The film is about this fictional arcade Sarsaparilla Sam Saloon and it focuses on this animatronic cowboy named Sarsaparilla Sam and he’s programmed to do the same show every single day,” Douglass said. “Over time, he has been questioning his creative freedom, like he does the same thing over and over again and wants to be able to write a new show.”

Additionally, the film addresses issues within the film industry, in which filmmakers experience setbacks from those funding films, who question expensive ideas or do not share similar visions, according to Chang.

“We constantly see Sarsaparilla Sam as his voice is continuously stifled by his boss, Grimley,” Chang stated. “That heavily applies to us because we see this a lot in the film industry, where people just remake films over and over again for money and a lot of times people are just creatively stifled.”
ARTIST FEATURES
Chang explained that the idea for weekly artist features sprung from the idea of encouraging creative freedom. By promoting artists, Chang and Douglass support other creatives while fundraising for their own creative project.

“So, with our marketing initiative it became an excuse to really promote our friends that are artists. So, each week on our page on our Facebook and our Instagram we feature an artist a week,” Chang stated. “ In our fundraiser, we have found artists to not only to promote, but artists to collaborate with which is another big passion of ours.”

“This isn’t just something we’re doing for fundraising—we are going to continue this through post-production, we’ll do artists of the week and we’re even already talking about doing an event next semester,” Chang said.
FILMMAKING COMMUNITY
Though Douglass and Chang hope to create a quality short film, both hope that this project primarily fosters a community during the film’s production, as well as after they complete the project.

“I think the most important aspect of a Christian filmmaker is the community you foster not just on set but before and after set,” Douglass stated. “I’ve learned filmmaking is about fostering a great community as much as it is about making a good film.”

Creating a collaborative project whose fundraising supports the theme of creative freedom, Chang and Douglass emphasize that all artists and those who donate get to share a part of the creative process.

With crowdsourcing for their fundraising campaign ending on Nov. 21, those who want to support Douglass and Chang’s short film can donate through their Indiegogo Campaign and stay updated through their social media and website. The film is set to release post-production in either late 2022 or early 2023.