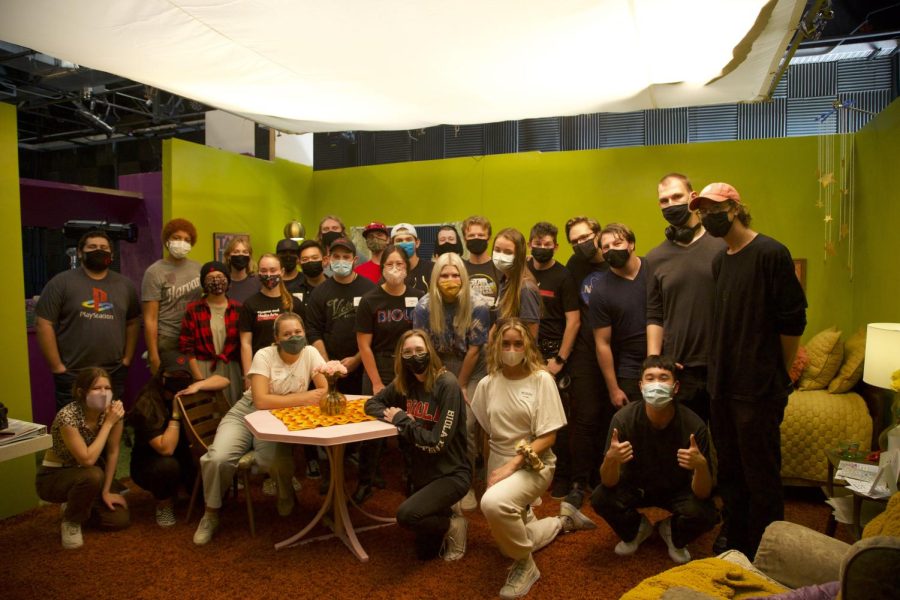 The cast and crew of "Incalculable Unknowns" gather for a post-production picture.

For the first time, Biola’s Motion Picture Production class will release two films in one semester. This year’s group of students have come together to bring their imaginative world to life in the first film, “Incalculable Unknowns.” Director Annabel White and producer Sarah Umhau could not be more excited.
IDEAS TURN INTO DREAMS
Senior cinema and media arts majors Annabel White and Sarah Umhau knew they wanted to create a film together from the beginning. After meeting in their sophomore year cinematography class, the two made a statement about how amazing it would be to someday be in the positions they are in now. This year, their dream came true when they became producer and director for one of this semester’s films.
TRUTH BEHIND THE FILM
“Incalculable Unknowns” covers the story of two sisters in their older years. As one sister’s mind runs freely as she rests in a coma, the other sister is faced with the difficult decision of taking her off life support. While the sister is in a coma, she imagines herself on a spaceship.

“Our goal was to make the film as short as possible and feel like a moment. The other one will feel more big and cinematic, while ours will be short and to the point,” White said.
GOOD SUPPORT
Apart from just the director and producer there are many other students working on making the film come to life. The team includes people within production, casting, assistant directors, craft services, marketing, covid-compliance officers, art, set construction, costume, camera, grip and electric and post-production.

“From the beginning of the class we said we had two things we wanted to accomplish,” White  said. “We want everyone in class to have a good time making it, and that it will benefit everyone involved.”

Production wrapped up a few weeks ago and the film is now in the process of being edited. Students, faculty and everyone else can save the date to see the “Incalculable Unknowns” premiere on Dec. 10.