The Eagles dominate the field against the Silverswords, 3-1. 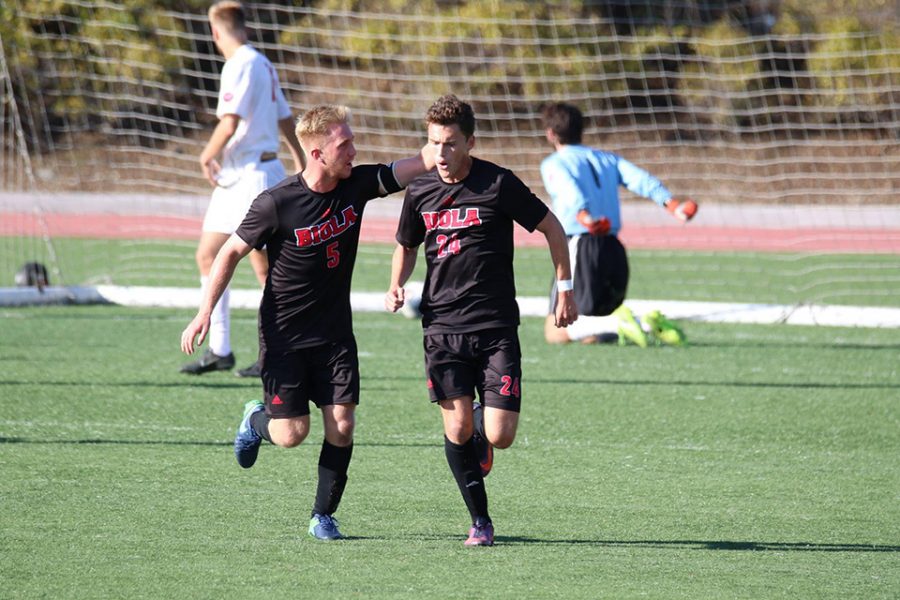 Men’s soccer traveled to Honolulu, Hawaii to compete against Chaminade University of Honolulu on Saturday night. The Eagles’ offense was silent in the first half, but made a comeback in the second to gain three goals, winning, 3-1.
FIRST HALF LETDOWN
The Silverswords started off the first period attempting three shots, while the Eagles responded with two attempted shots of their own. Chaminade was successful at the 17-minute mark scoring the only goal of the first half. Despite the disadvantage redshirt senior goalkeeper Luis Rodriguez gained two saves in the first half.
SECOND HALF REDEMPTION
Ten minutes into the second half Biola tied the game 1-1 with a goal made by redshirt junior midfielder Theo Le Calve, assisted by redshirt junior midfielder Aidan Hill. In a matter of two minutes the Eagles made another goal pulling ahead 2-1. Redshirt freshman forward Adam Jones made the goal with the help of redshirt sophomore midfielder Gabriel Berthoud.

Berthoud then assisted redshirt senior midfielder Pontus Gitselov to make the final goal of the match, putting the Eagles at 3-1 to defeat the Silverswords.

Men’s soccer (7-4 overall, 3-1 conference) will continue their Hawaii tour facing off against Hawaii Pacific University on Monday, Oct. 18 at 10 p.m. The livestream will be available on the Biola Athletics website.