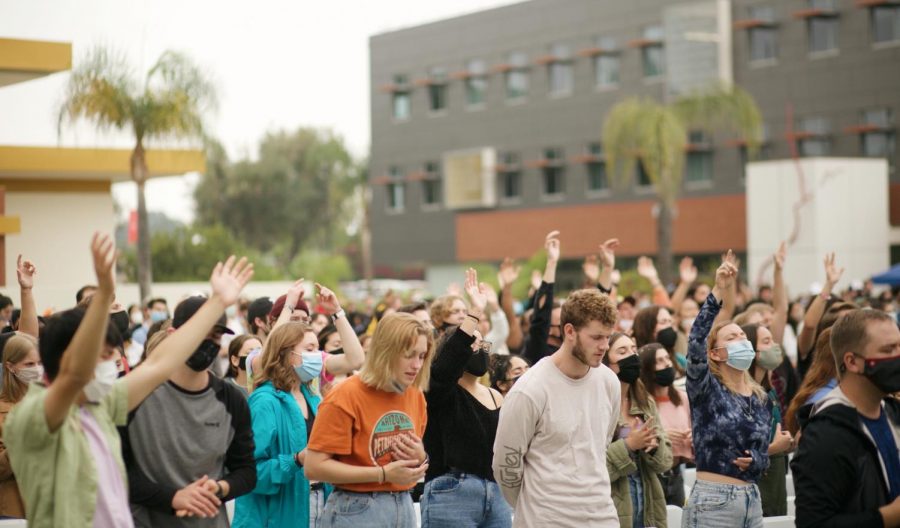 DAY ONE, SESSION 1
The rain sprinkled down this morning as students stood in line for the first in-person Torrey Conference since 2019. Wet seats and small mosquitoes awaited students on Metzger Lawn. Regardless of the damp weather and busy insects, Biolans shuffled to their seats in anticipation for the first conference session. Metzger was packed with students, both sides facing the center of the stage. Even though the session took place outdoors, masks were required at all times.


GLORY TO GLORY
“As God’s creation, we are called to give him glory,” one of the worship leaders proclaimed as the team led the student body in praise.

The theme this year was introduced by President Barry Corey and the conference leaders, who explained that the focus passage is 2 Corinthians 3:17-18. Corey explained to new students how the conference is a beloved Biola tradition.

Interns from Spiritual Development introduced other events on campus today in relation to Torrey. Students were invited to explore a Pasta Tower of Babel under the Bell Tower, a Wellness Station and community Bible writing of Colossians by Flour Fountain, and a singer/songwriter showcase on the steps of Bardwell Hall.
IDENTITY IN CHRIST
Associate professor of spiritual theology Kyle Strobel began the first session challenging students to find their identity in Christ rather than in the world or in themselves. Our culture, he told students, is obsessed with defining ourselves. Rather than discovering your identity in the world, it must be found in Christ.

“You are called to be glorious,” Strobel told students. However, this glory must be found only in the cross. Strobel explained that it was vital students “show up before the face of Christ,” in their sin, where they will find forgiveness and freedom. “Turn to Christ. He defines you,” Strobel shared.


SESSION 2
The evening was dark but the outdoor stage was lit as Biolans made their way to their seats for the second session of Torrey Conference. Session two opened with a glow stick game that required students to raise colored glow sticks according to the colors that flashed on screen. A poem written and performed by music and English double major Evan Dickerson followed the game. Then, interns from Spiritual Development recapped the day’s events and introduced the speaker, associate professor of spiritual theology Kyle Strobel.
REAPING AND SOWING IN WEAKNESS
Strobel began the second session by challenging students in the way they perceive their spiritual gifts. Often, people come to think their natural abilities are their spiritual gifts, he said. People sow from their natural abilities, but what they reap will not last.

“Jesus is telling you how to cultivate an eternal existence,” Strobel said. He went on to enforce the Bible’s fundamental axiom of “what you will sow you will reap.”

Strobel likened this to a time he lived in Scotland. There were piles of rocks everywhere, he said. When they were built, they seemed like they were eternal but they were not. Such is the same with what people build on earth. He asked students who they were sowing and reaping to—Jesus or the earth.
DAY TWO, SESSION 3
Worship on Thursday morning poured over the crowded memorial lawn under cloudy but warm skies. Though the student body was quiet and contemplative, the morning rang with a kind of triumph and celebration, filled with expectation for what was to come.

Student leaders gave a recap of last night before inviting Spanish singer/songwriter Evan Craft to the stage for a Q&A about his life and his career. After Craft, associate professor of spiritual theology Kyle Strobel took the stage for the third time.
PRAYER AND JUSTIFICATION
As Strobel came up to the podium, his notes blew away and were disordered, but this did not stop him from speaking straight from the heart. He began by recapping his messages over the last few days, before taking the conceptual elements of his message into a more concrete path.

Strobel spoke about our need for forgiveness as Christians. He did this by comparing the Pharisee and the tax collector, a man who was considered righteous in the flesh and one who was completely aware of his inadequacies. The first man was not justified, while the second was. He tied this into prayer by challenging students to offer the deepest parts of themselves to God in prayer


DAY THREE, SESSION 5
Students crowded into Chase Gymnasium on Friday morning for the final session of Torrey Conference. Despite an expected rainstorm and technical issues, the last session invited students to reflect on their faith and share their perspective on the week.
FADING GLORY
Dean of Spiritual Development Todd Pickett cartwheeled onto the stage ready to enthusiastically guide students in reflection of Torrey Conference. He re-examined the theme “Glory to Glory” explaining that the glory we seek fades fast but the glory we need in God’s grace is eternal.

“We come to be who we are in the face of another. To be a Christian is to bring ourselves face-to-face with Christ. The mirror you are called to look into is the face of Jesus,” Pickett said.

Humans, Pickett explained, are designed for glory. Social media allows us to affirm one another but the superficial glory received does not last. The need for an identity seems crucial in school—the clubs we join or the titles we hold help define us. Pickett explained that Jesus does not know the fake identity we place on ourselves because he knows who we truly are.

“So, when Jesus says to people ‘I never knew you’ it’s not some kind of major rebuke, it’s kind of like ‘you never lived in the truth of yourself before me,’” Pickett said.
REFLECTION
Near the end of the session, Pickett invited students to share their  “ABC” reflection—appropriate, brief and concrete—of Torrey Conference. As “Glory to God” softly played, students shared their perspectives.

After a time of reflection, the gymnasium was filled with soft voices joining together in worship.