Volleyball suffers a loss against APU

The Eagles battle for a win against the Cougars, but ultimately lose, 2-3. 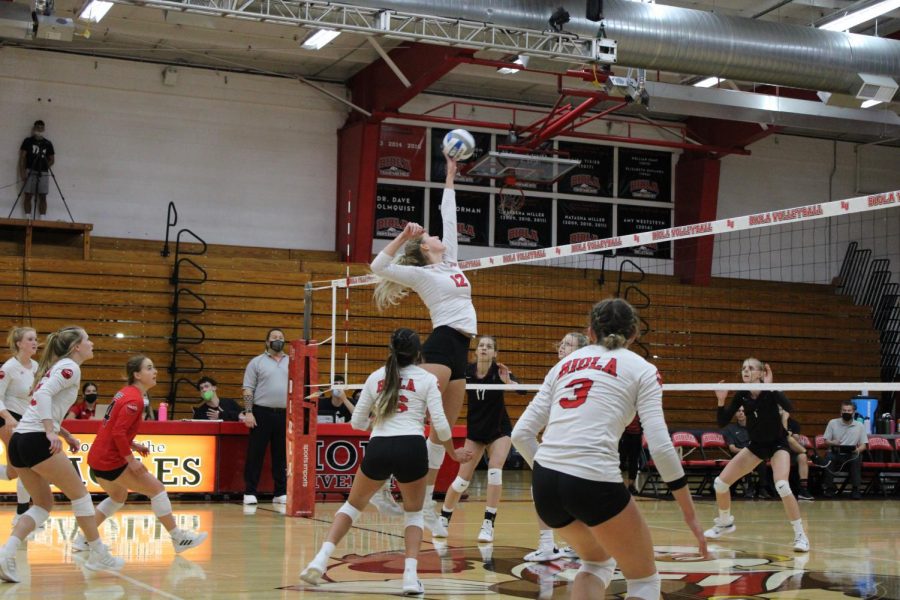 The Eagles faced Azusa Pacific University at home on Oct. 1. The Eagles fought hard in the fifth set for a win, however, the Cougars ultimately won the match. This left the Eagles with a loss, 2-3. By the end of the game, the Eagles had a total of 97 points, 54 kills and two aces.
PLAYERS’ SUCCESS
Although Biola lost the game, redshirt sophomore outside hitter Madison Beebe carried the Eagles, scoring 16 total points and gaining 15 kills. Redshirt sophomore middle blocker Raegan Tjepkema followed close behind, scoring 13 total points and achieving 11 kills. With three solo blocks and two block assists, redshirt sophomore middle blocker Abigail Copeland kept the Eagles in the fight against APU.
THE MATCH
In the first set, Biola and APU played a close match—the Cougars took the lead by three points, resulting in a score of 22-25. Tjepkema scored the first kill of the game, with Beebe scoring four kills throughout the first set.

In the second set, Biola pulled ahead, beating APU in the set and championing 15 kills and 44 attack attempts, 25-23. The Cougars won the third set, 15-25. The Eagles did not let the loss discourage them, winning the fourth set by three points, 25-22. Carrying into the fifth set, Biola suffered a loss by five points, causing them to lose overall, 2-3.

Volleyball (7-5) will travel to Hawaii to face off against Hawaii-Hilo University in the UHH Gymnasium on Oct. 6 at 10 p.m. The livestream is available on the Biola Athletics Website.