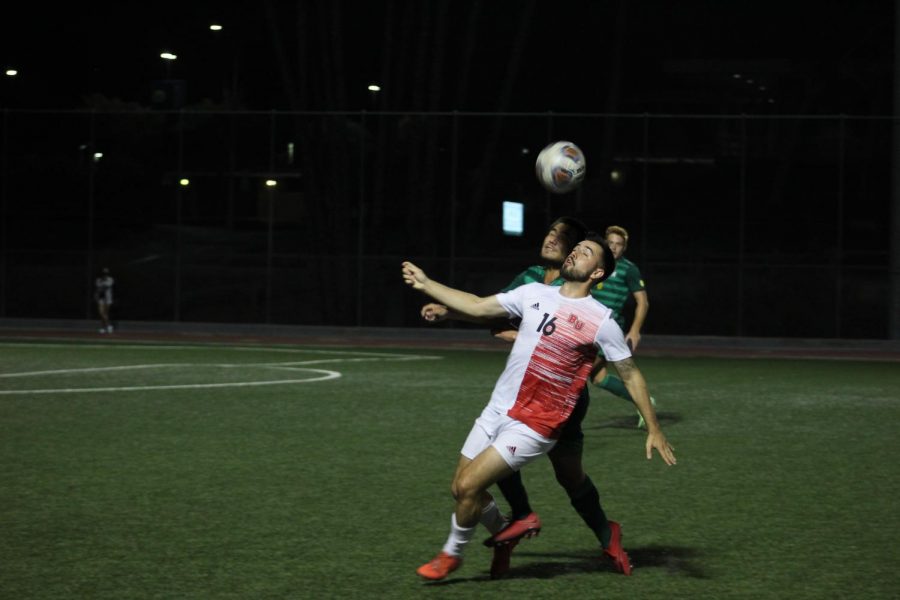 Midfielder Daniel Simonis fights for the ball during Biola's game against CUI.

In an intense battle against Concordia University Irvine, men’s soccer won 2-1 at home, ending their losing streak. Redshirt senior midfield Daniel Simonis secured the win in the 74th minute. Simonis received a pass from freshman forward Israel Ortiz and outran the goalkeeper, where he scored easily.
CLASH OF THE EAGLES
Biola struck first in the 38th minute with a header from freshman forward Moose Bonat. Redshirt junior defender Lawrence Kwazema initiated the attack and Simonis delivered an aerial pass to Bonat in the middle of the keeper’s box. Simonis ended the game with three shots, two shots on goal, one assist and one goal.

CUI pressed on the Eagles throughout the game as they ended the night with 10 shots on goal. However, redshirt sophomore JD Gunn stood firm in goal, ending the game with four saves.

The game intensified toward the end when Simonis was taken down by a CUI defender near the keeper’s area. Oakson continued the play and Biola redshirt junior Aidan Hill tackled him. The act angered CUI and both teams became aggressive. Nonetheless, Biola was able to secure the win in the end, 2-1.

Men’s soccer (4-3) will face off against the Academy of Arts University at Al Barbour Field on Thursday at 7 p.m. Footage from today’s match can be found on the Biola Athletics’ website.