The Eagles continue their winning streak as they move their overall standing, 5-2. 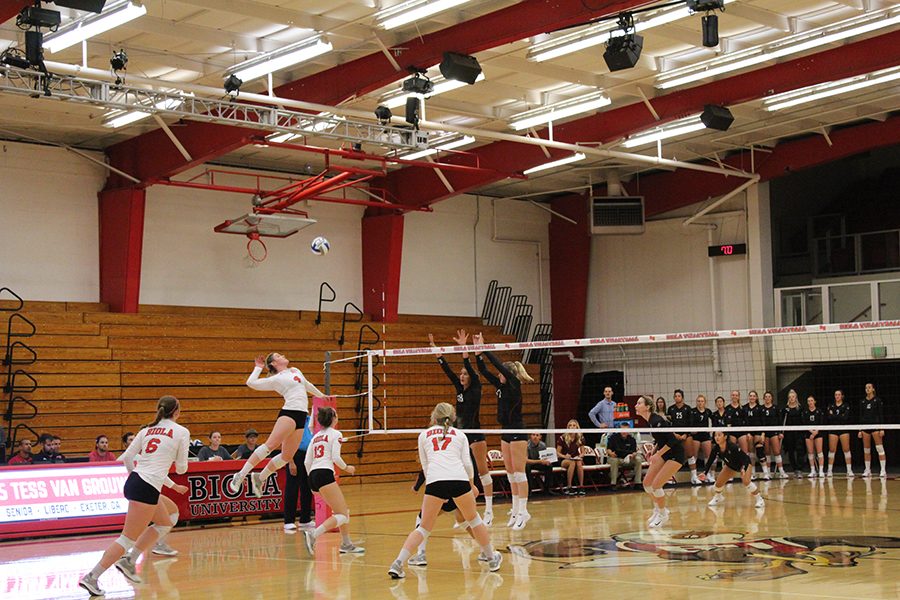 Volleyball returned home Wednesday afternoon to compete in their second to last game of the PacWest season against Concordia University Irvine. The women are currently on a five-game winning streak and were named the PacWest SoCal Pod Champions after Wednesday’s win against CUI, 3-1.

The Eagles had a total of 49 kills, 10 aces and 58 digs in Wednesday’s game. The leaders in last night’s game were redshirt freshman middle blocker Dani Bryant, sophomore middle blocker Raegan Tjepkema, sophomore outside hitter Madison Beebe, sophomore setter Abby Brewster and senior libero Sami Hover. Bryant had 12 kills, three blocks and 10 kills, while Beebe had 10 kills of her own. Tjepkema had seven aces and four blocks, while Brewster had eight kills, one ace, 16 assists and 10 digs. Hover totaled six assists and 18 digs.
CROWNED CHAMPIONS
The Eagles had a tough start to the first set. The Golden Eagles scored the first two points and from there it was a back and forth battle. Each team would go on winning streaks but in the end Biola was unable to catch up, losing set one, 21-25. The Eagles took this loss and used it as motivation to improve in set two. The Eagles scored the first two points. CUI gained a few points of their own, but Biola went on several winning streaks early on, contributing to their blowout win for set two, 25-12. The start of set three was discouraging, but the women pulled through and won, 25-20.

Biola started off back and forth with CUI in set four. The Eagles went on a seven-point streak, leaving a huge gap and CUI Golden Eagles feeling not so golden because they could not decrease the deficit. Biola eventually won set four with a 10-point lead. The Eagles overall won the game 3-1, winning the PacWest SoCal Pod and receiving the title of champions.

Volleyball (5-2) and will compete at the Felix Event Center to compete against Azusa Pacific University in their last PacWest season game on Thursday, April 22 at 5 p.m. The livestream will be available on the Biola Athletics website.