Volleyball is on a three-game winning streak 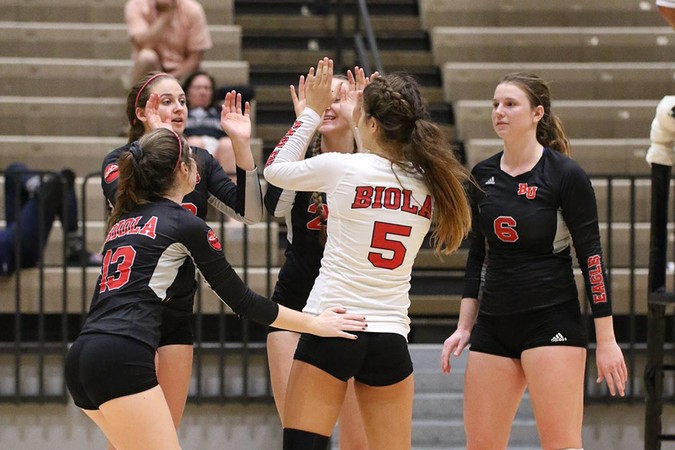 Volleyball headed to San Diego, Calif. to compete against Point Loma Nazarene University on Wednesday, April 7. The women killed it down South and left PLNU in the dust with a 3-2 win.

The Eagles totaled 64 kills, nine aces, 48 assists and 86 digs in Wednesday night’s game. Some of the leaders in the game against PLNU were sophomores outside hitter Madison Beebe, middle blocker Raegan Tjepkema, middle blocker Abigail Copeland and senior libero Sami Hover. Beebe had 11 kills and following behind was Tjepkema with 11 kills, four aces and five blocks. Copeland had nine kills and three blocks, while Hover finished with three assists and 24 digs.
KILLING THE COMPETITION
Biola went back and forth in the first set. PLNU made the first point, and from there both teams would go on point streaks, but ultimately after being tied at 21, Point Loma excelled ahead to leave Biola with a loss 21-25. In similar fashion, set two was split in gaining points, with Point Loma gaining a two-point advantage. However, the Eagles pulled ahead at the end to win the set, 25-17. PLNU later won set three 25-22 and Biola set four 25-21, sending the teams into a fifth set to determine the winner.

In set five the Eagles opened up gaining the first two points, but Point Loma responded with two points of their own. Biola then responded to PLNU’s score streak with one of their own to tie the game at six points. It continued to be anyone’s game until Biola pulled ahead 12-10, from which Point Loma was unable to catch up, leading the Eagles to victory 15-12, overall 3-2.

Volleyball 3-2 and will return home to go against The Master’s University on Friday, April 9 at 5 p.m. The livestream will be available on the Biola Athletics website.