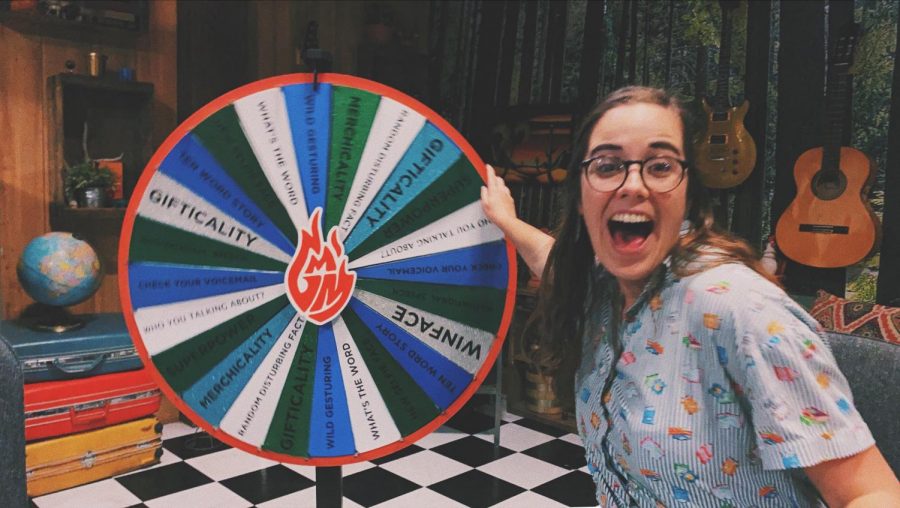 This story was edited with revised information on April 3 at 9:36 a.m.

It all began with kazoos. In 2012, Annaliese Franklin had just transferred to Biola University. The night she moved into Stewart Hall, she received an unexpected email. Up-and-coming YouTube personalities Rhett McLaughlin and Link Neal, better known as Rhett & Link, were inviting their fans to participate in a Los Angeles-based music video shoot by playing kazoos at a house party.

“I knew I had to go,” Franklin said, spontaneously asking her new roommate to come with her.

Franklin and her roommate “instantly bonded” as they attended the shoot, kazooing to the tune of Lionel Ritchie’s “All Night Long” while Rhett & Link provided vocals. Franklin had no idea that in the future, she would land a major job position at Rhett & Link’s production company, Mythical Entertainment.

“If you would have told me that eight years later I’d be working my dream job with them, I would have never believed you,” Franklin said.
ON THE JOB
Although best known for the daily YouTube show “Good Mythical Morning,” which has 17 million subscribers, the Mythical Entertainment brand releases a wide spectrum of online content.

“I was hired as a production coordinator, and that was to oversee and support…the production and logistics for shoots for a couple different teams,” Franklin said.

After a few months at Mythical, Franklin shifted roles and began to coordinate larger production efforts. When the newly-created “Good Mythical Morning” spinoff “Mythical Kitchen” increased in popularity, a unique opportunity emerged for Franklin: line production.
IN THE KITCHEN
Franklin currently handles the “start-to-finish” production process of “Mythical Kitchen” food shows, taking on a “full-fledged overseeing” of shoots and episode development. On an average day on set, Franklin usually helps shoot between one and four episodes, handling script preparation and ensuring the “Mythical Kitchen” crew stays on track.

“We do have a pretty fun vibe on set,” Franklin said. “We can work really efficiently and get the shots we need in a quick way, but it’s also very silly and sometimes chaotic.”

According to Franklin, the “Mythical Kitchen” prepares rather out-of-the-ordinary dishes for their videos.

“We just did an episode where we recreated Gordon Ramsay’s Beef Wellington using only ingredients from a 7-Eleven.”

Franklin said that due to the COVID-19 pandemic, the “Mythical Kitchen” crew has used delivery services such as Instacart to purchase their ingredients.

“I’m grateful that we’ve been able to find workarounds,” Franklin said of COVID-19 precautions at Mythical. “In times when people are stressed for exterior reasons, we’re able to still put our best foot forward at work.”

During the pandemic, Mythical has downsized the amount of staff on set, allowing some crew members to work remotely. According to Franklin, doing so takes a lot of extra communication and coordination; she misses the moments of in-person connection that come from sharing a workspace with others.
BIOLA BEGINNINGS
Franklin said her Biola film studies education “was integral” to her career journey—not only boosting her confidence as a leader, but also providing her with creative collaboration opportunities involving other film students, and connections leading to future jobs. After graduating from Biola in 2014, Franklin did freelance work as both a production assistant and an assistant director.

“By working hard and being eager and curious, you get the next job and then the job after that,” Franklin said. “I was able to make projects with people that were hard and overwhelming and fun and beautiful. And you succeed or fail and those teach you lessons.”
LIVING A MYTH
Franklin said she wondered whether she actually wanted to be a film director, or whether she simply enjoyed the process of collaborating on projects with friends.

The crew-based creative environment at Mythical Entertainment ultimately appealed to Franklin, who has been a fan of Rhett & Link’s content since high school.

“They lead their team with a sense of strong leadership, but also with a lot of trust,” Franklin said of her experiences with Rhett & Link, who she described as “quick to give praise and kudos” and “naturally talented and hard-working.”

Franklin said she was “floored” at being able to interview for her position on the Mythical team.