Baseball rises and falls to PLNU

Starting off strong with a 13-5 win, the Eagles’ doubleheader turned into a downhill slide with a 2-10 loss. 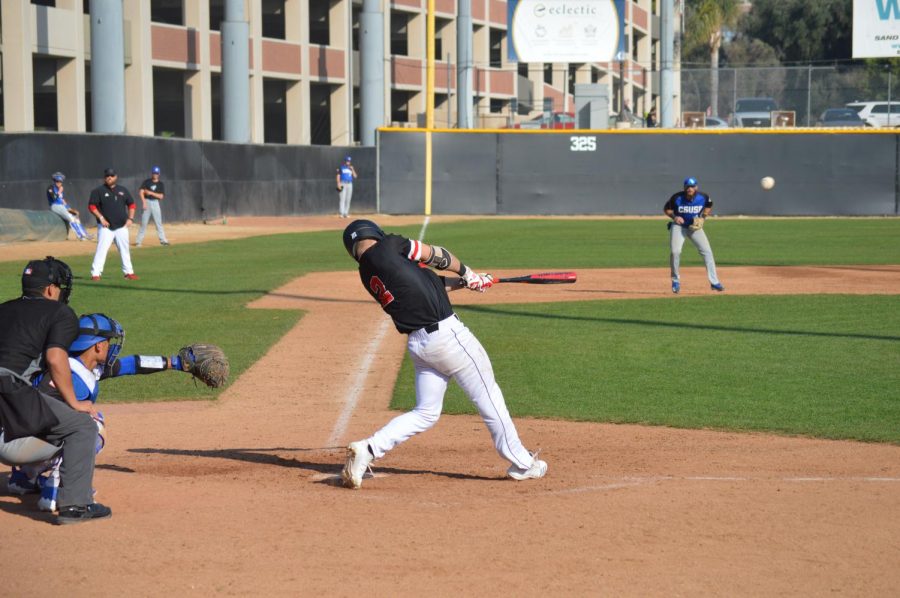 The Eagles hosted Point Loma Nazarene University this Saturday, March 27 for a doubleheader. After struggling through six straight losses in the PacWest Conference, Biola was able to add a win to their 2021 record. The team started the afternoon off with an impressive 13-5 win, but dropped the ball in the second game with a 2-10 loss.
FIRST WIN OF THE SEASON
Biola started off four points ahead in the bottom of the first inning. Junior catcher Ben Smith and senior infielder Jacob Portaro advanced unearned. Junior first baseman Ryan Gallegos advanced to second and Portaro and Smith to home plate. Moments later, sophomore third baseman Tyler White’s single advanced the base leaders, sending junior right fielder Brandon Cody and Gallegos home for the Eagles, quickly putting them up 4-0.

The Sea Lions were unable to keep up with the momentum Biola created and remained scoreless throughout the first four innings. The Eagles found even more earnings in the bottom of the fourth. Senior center fielder Johnny Sage advanced to third and sent junior shortstop Connor Kotescka home. Portaro homered, while Smith and Sage scored, bringing the Eagles up to nine points. Senior second baseman and shortstop RobertAnthony Cruz finished up the fourth inning by scoring, leaving Point Loma in the dust with a new score of 9-0.

Point Loma fought back in the second half, when they scored two points in the top of the fifth inning. The Eagles maintained a strong lead by bringing in another three runs. Smith, Sage, and Kotescka were all responsible for these. Without delay in the fifth inning, the Eagles still maintained a 10 point lead, which was topped by junior first baseman Jackson Collins in the seventh, who score off of a freshman outfielder Brended Bell double.

The top of the eighth inning closed the gap as the Sea Lions scored another three points, but they just never caught up to the Eagles who went on to earn their first glorious win of the season.
SECOND GAME SLUMPS
Game two began with the Eagles having a competitive edge over PLNU with their comfortable victory in game one. However, the backend of the night showed a shift in momentum. The score remained at zero for both teams up until the top of the first for the Sea Lions. By scoring two quick runs, Point Loma added to the scoreboard leaving Biola with work cut out for them. The Eagles were able to produce a single run in the bottom of the third, courtesy of a Gallegos single that brought Cruz through home plate off of an error.

With the game now a one-point match, the Sea Lions decided it was time to run off with the victory. PLNU scored six runs in the top of the fourth inning to put them up 8-1 halfway through the game. Looking for a comeback, a final run was scored by Biola in the bottom of the sixth as Cody hit a home run. Unfortunately, that was the last time the Eagles would put up numbers on the night. The Sea Lions added to the heartbreak with two additional runs earned in the top of the seventh inning, ending the game with PLNU heavily on top, 10-2.

Biola baseball now sits at a 1-7 overall record after earning their first win of the season tonight. The Eagles will travel to the Panthers’ diamond on Wednesday, March 31 at 7 p.m. to take on Chapman University.