‘Are we Asian Americans your neighbors?’

The overall hate crime rate in major cities has decreased, but Anti-Asian crime has risen by nearly 150%. 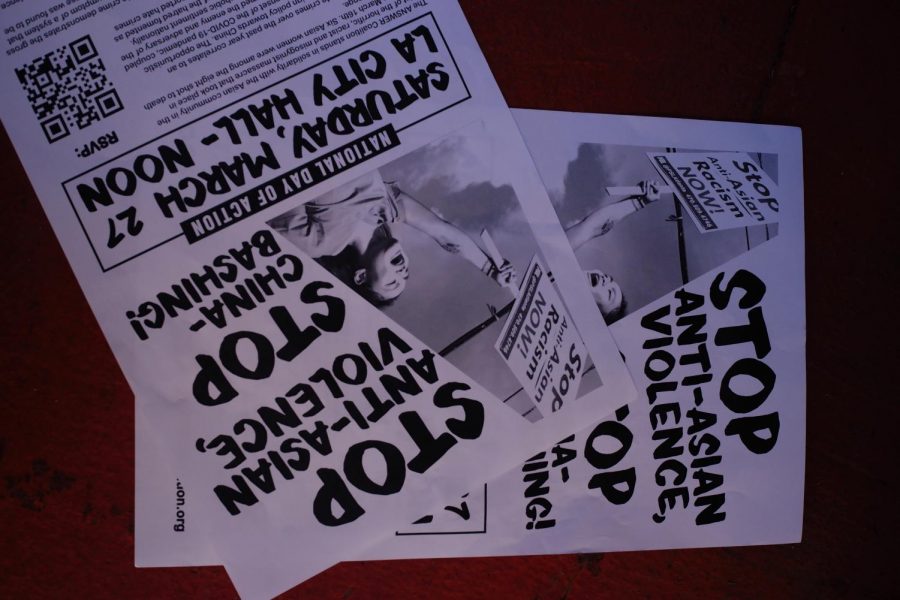 “It’s a whole nother thing when it’s your race going through it,” said senior business major Sena Lee. “Because our culture is to suppress emotions to not speak up, to put your head down, and don’t make a ruckus, it’s really hard for us to deal with the pain right now. Because we can’t justify it.”

Lee, among other Asian Americans and Pacific Islanders, has been plagued by fear with a noticeable increase in hate crimes against her community. Asian hate crimes have been on the rise since the start of the COVID-19 pandemic―even though overall hate crimes have declined, according to an analysis by the Center for the Study of Hate and Extremism at California State University, San Bernardino.
“CHINA VIRUS” AND THE “KUNG FLU”
In early 2020, COVID-19 hit, causing what is now a year-long pandemic. At first, the virus was not well-researched and in February, former President Donald Trump admitted in a taped interview for journalist Bob Woodward’s book Rage that he had downplayed its severity.

Later that same year, reports came out accusing Trump of using labels such as “Chinese virus” in press conferences despite the World Health Organization’s guidelines for naming diseases. He was also seen referring to the coronavirus as the “Kung flu,” on June 20, 2020. A few days later he used the same term in Arizona while speaking at a youth rally.

Although Trump later argued that the terms were not meant to be racist, reports indicated a spike in xenophobia and hate crimes against the AAPI community according to Time Magazine.

“[Trump has pushed] to help out economically, you know bipoc communities, but his actions and his words in his tweets and just about everything else, it’s just like belittling those communities,” junior biological sciences major at University of California Irvine Sean Gonzalez said.

According to research released by Stop AAPI Hate, nearly 3,800 Anti-Asian fueled hate crimes were reported since the start of the pandemic, a significant increase from last year’s count of 2,600 hate incidents nationwide over five months. Additionally they found a substantial number of reports show AAPI individuals being harassed on the streets and told to “go back to China” among other racial slurs.
FACING DISCRIMINATION
Verbal harassment and degradation are not new to the Asian American community according to Biola’s chair of the Department of Sociology Stephanie Chan. In California, 20% of high schoolers have experienced teasing or bullying because of their race or ethnicity, she explained.

“People need to know that this is happening. Because I think what a lot of people do is dismissive― ‘Oh, it’s just a joke, can you not take a joke?’ but that joking begins the process of dehumanizing and then dehumanizing paves the way for violence and attacks of other forms, too,” Chan said.

According to the Anti-Defamation League’s website, before schools shut down, Asian American students were taunted and bullied by classmates who blamed them for the pandemic.

Junior sociology major Marianna Kwok recalls an incident where her community was racially profiled a month after lockdowns began in March. A couple standing in front of Kwok and her mother began blaming the Asian community for the virus.

“[This couple was] saying that the Asian community is dirty and unclean, and everyone who had come to America [from Asia], recently, just to travel—they’re the ones who had spread the virus,” Kwok said.

Physical attacks have also been reported. Students at San Fernando Valley high school accused a 16-year-old Asian boy of having COVID-19 because of his race and beat him up so badly he was sent to the emergency room.

“It’s kind of crazy how people can kind of just attribute one aspect of a person’s physical appearance to something as horrible as starting this whole pandemic,” Gonzalez said. “It just stems from lack of education and lack of information. But that doesn’t mean that you should apply those biases, those uninformed biases, to strangers.”
SEX ADDICTION VS. MURDER
On March 16, Robert Aaron Long opened fire on three massage parlors in Atlanta, Georgia killing eight victims, six of whom were women of Asian descent. In addition to the six victims of Asian descent, a Caucasian man and woman were also killed. Long claimed that his sex addiction sparked the shootings, though police have yet to come out with an official statement.

The community at large has seen this incident as a racially motivated hate crime, and the impact of it has echoed beyond Georgia. Publications in Texas, California and Michigan have all shared stories of Asian communities living in fear following the rapid increase in violent attacks surrounding them.

The police officials’ reluctance to label the attacks as a hate crime has outraged several Asian Americans. As a way to explain the shootings, Cherokee County Sheriff’s spokesman Jay Baker claimed Long was “having a bad day” at a press conference on March 17.

On March 19, President Joe Biden and Vice President Kamala Harris spoke at Emory University in Atlanta, Georgia and condemned the shootings claiming that the country needs to rally together during this time, although earlier in the day Biden withheld judgment on the motivation behind the attack. As he delivered his remarks at Emory University, Biden explained that hate crimes against the AAPI community have been amplified since the start of the pandemic.

“Whatever the motivation, we know this: Too many Asian Americans have been walking up and down the streets and worrying, waking up each morning the past year feeling their safety and the safety of their loved ones are at stake,” Biden said. “They’ve been attacked, blamed, scapegoated, and harassed. They’ve been verbally assaulted, physically assaulted, killed.”

MOST VULNERABLE
In June 2020, Stop AAPI Hate released a concerning report that explained elderly Asian Americans accounted for 11.2% of attacks in California. Most of these reported attacks happened near San Francisco’s Bay Area.

Director of Student Enrichment and Intercultural Development Meleca Consultado shared her family’s pain from last March to this month going through constant harassment and reminders of racial inequalities. She explained that her cousins and extended family have all shared the plight of being the only Asian American present in a workplace, adding that even her brother felt the need to transfer stores after being targeted by co-workers.

“I think one of the most difficult things is trying to find this balance of being able to work in the places that we want to not creating animosity with our neighbors or work environments,” Consultado said. “And so last week, again, [it’s just a] culmination of a lot of communal trauma from our community.”

“There’s a trend with all of these attacks. It’s a lot of elderly people and I feel like these perpetrators, they’re targeting the weakest people and obviously, the elderly people are the most frail and they don’t expect to be hurt like that,” said sophomore pre-nursing major Alyssa Monji.

For those whose families are located around the Bay Area, fear and paranoia that their loved ones will be targeted next has increased. Graduate behavioral psychology student at Pepperdine University Ashley Chae feels helpless wondering what will happen to her parents located close to San Francisco.

“I think of the worst case scenario at this point, you know, like they’re driving and I don’t know they get shot at or they get robbed. It’s like I have never prayed so hard every single day because my parents, they’re very strong people, but they can’t defend themselves,” Chae said.
ALLIES AND RALLIES
Though fear has become ingrained in the AAPI community, Lee explained her peers have been frustrated because they do not know how to process their sadness.

“And one thing that we are super sad about is the lack of acknowledgment, even like at church,” Lee said. “But then no one’s really talking about this. And it’s just because it was so close like it just happened.”

She added that during meetings she has had with them, men and women alike have found themselves crying out to one another. The fear and lack of visibility her community feels have been amplified by the lack of answers and support seen outside of social media. Despite the silence at large, Lee added that Biola has made her feel seen through their efforts.

Chief Diversity Officer Tamra Malone, Student Government Association and Student Missionary Union released separate statements regarding the incident that took place in Georgia. Malone, along with each organization shared their grievances for the AAPI community, making each organization on campus available as a resource.

“When I read Tamra’s email, I felt so seen and validated,” Lee said. “And I know we have this tension at Biola about race, but honestly, more than any other organization that I’m a part of I feel like Biola does a really good job to be intentional.”

Program Coordinator of Global Student Programming and Development Noelle Delacruz, Consultado, Lee and Monji echoed the same sentiment towards the church, calling the body of Christ to help those who are hurting within it.

“I think this is such a crucial moment for Christians in the church,” Delacruz said. “And this is such a missed opportunity if we’re not doing the sacrificial love that Christ has called us to right? Are we Asian Americans your neighbors?”

University of California, Los Angeles sophomore human biology and society major Udayvir Birdi called the general population to rally together in search of change. He explained he felt encouraged when he saw people of all backgrounds gather in solidarity with the Asian community during the recent marches.