Both the men and women dominated Westmont College, winning 4-0 and 5-0. 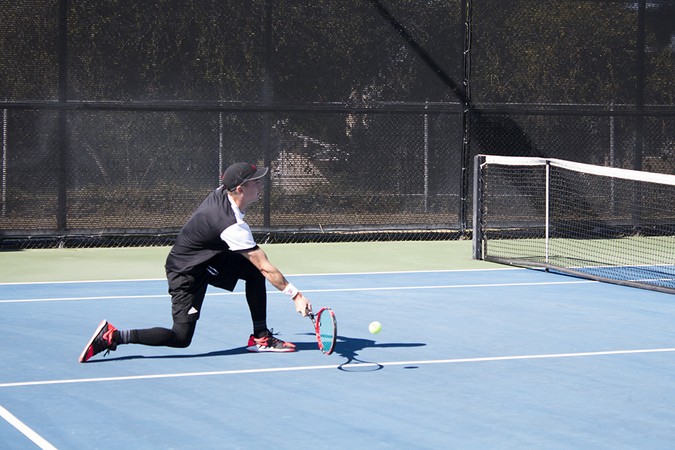 Biola tennis ventured to Santa Barbara on Thursday afternoon to compete against Westmont University. With both the men and women at the event, the pressure was on to match each other’s energy, and the teams did not disappoint. The women finished first with an overall victory of 4-0, while the men followed suit, reigning superior with a 5-0 victory.
WINNING WOMEN
The women began the Eagles’ day of success with the only finished game win in the doubles matches. Freshmen Brooke Fager and Lilly McNeill defeated Westmont’s No. 2 doubles partners 6-3. Sophomore Mary Brascia and freshman Colbyshae Emery tied the first set of their No. 1 matchup, 4-4, but their opponents left the game unfinished. There were no players for the No. 3 doubles, granting Biola a win by default.

Another win by default was found in the No. 6 singles match as the backend of the individuals began. McNeill won her individual’s in two sets of 6-3 while Brascia won her final set 6-1. Emery, Fager and freshman Gaby Carvajal all had unfinished matches.
MATCHED INTENSITY MEN
The men continued to set the tone for the Eagles with two wins in the doubles matches. Sophomores Alexei Prokopchuk and Antonio Rosales Varona defeated their No. 1 doubles opponents 7-5 while sophomore Sebastian Herrera and senior Erik Martinez swept their No. 3 opponents 6-0. Freshman Isaac Cordova and sophomore Alex Sedeno fell short of victory in their doubles with a close 5-7 loss.

The positive energy carried into the singles matches with the Eagles winning all of the finished games. Prokopchuk, Sedeno and sophomore Andres Meneses all won their individual matches with a final score of 6-1. Herrera defeated his No. 2 opponent in both sets, 6-1 and 6-3. Cordova and Martinez left the courts with matches unfinished.

The Eagles now sit at a 7-4 overall record, and the lady Eagles advancing to 11-2 overall. Both Biola teams have a quick turnaround and will be traveling to Azusa Pacific University on Saturday, March 27 to take on the Cougars. The women begin at 10 a.m. and the men at 2 p.m.