Women’s swim finish at No.14

Grace Kling, Meghan Tolman, and Kolya Vos all placed in the Top 10 at the NCAA Division II Championships. 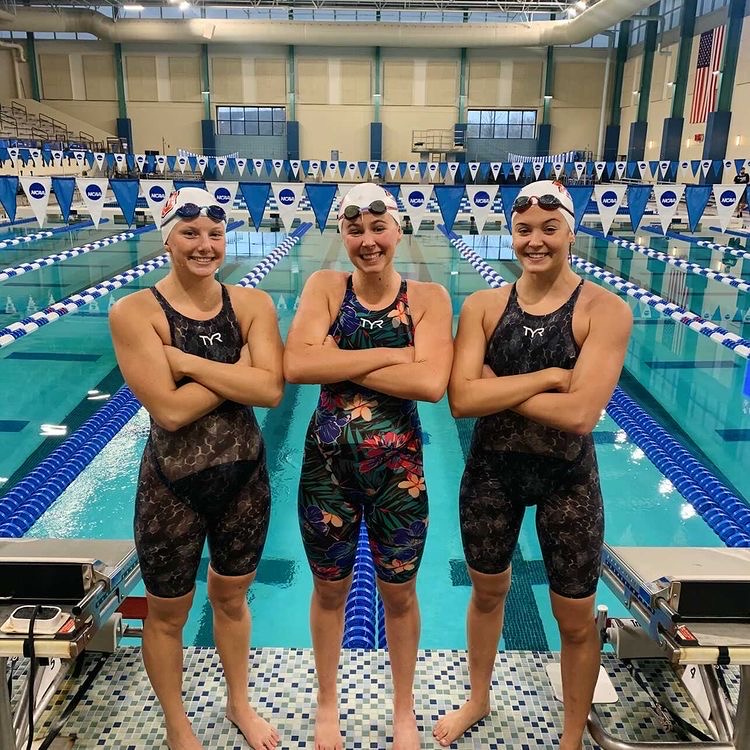 [Left to right] Kayla Vos, Grace Kling and Meghan Tolman at their meet.

Biola women’s swim went undefeated in their season, and three amazing women received an invite to compete at the NCAA Division II Swimming and Diving Championships in Birmingham, Ala.
FRESHMAN ON FIRE
The competition started for Biola on Thursday, March 18 when sophomore Kolya Vos competed in the 200-yard freestyle. Vos brought the fire on day one as she had a finishing time of 1:50.33, placing ninth overall in the nation.

Day two was an extremely successful day for freshman Meghan Tolman in the 100-yard breaststroke. Tolman had a finishing time of 1:03.22, breaking her own school record and becoming Biola’s first ever NCAA 1st-Team All-American. Tolman finished in eighth place in the race and finished as the No.1 freshman 100-yard breastroker in the nation.
THE TRIUMPHANT TRIO
Going into day three of competition Vos went on to compete in the 100-yard freestyle, finishing with a time of 50.88 seconds, beating her prelims time of 51.21 seconds and placing 10th in the nation. Freshman Grace Kling competed in the 200-yard breaststroke and had a finishing time of 2:16.97, beating her prelims time by two seconds. Kling finished ninth in the nation and was named the No. 1 freshman 200-yard breastroker in the nation.

Kling, Tolman and Vos were outstanding in their performances over three days of competition. Ultimately, the Lady Eagles finished No. 14 in the nation as a school at the NCAA Division II Championships.

All races are available to rewatch on the NCAA website. Women’s swim will compete in the Pacific Collegiate Swim Conference Championships on Wednesday, April 14.