Baseball begins the season with a loss

Bats awaken late, do not secure a win. 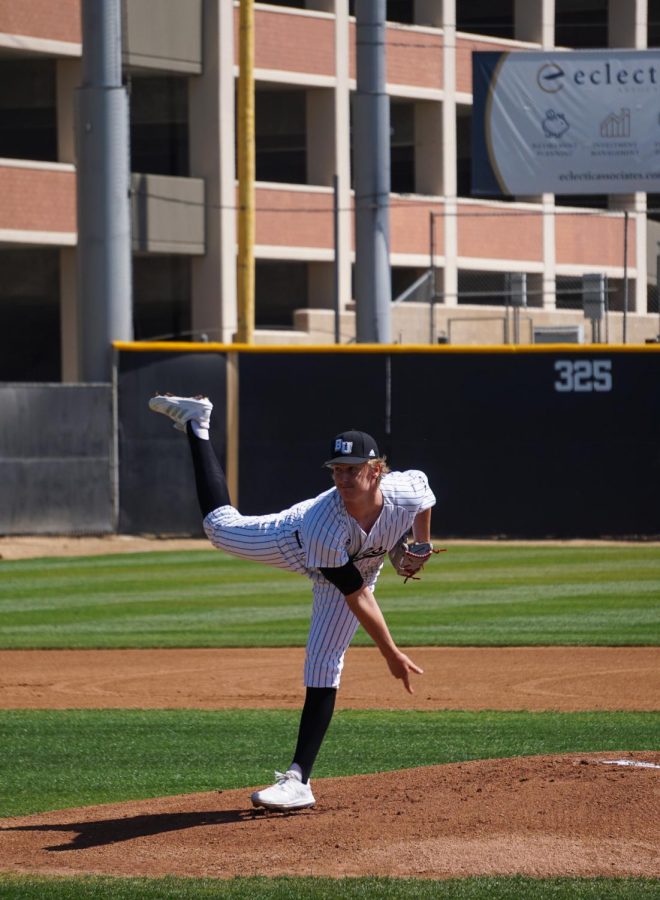 After a year of no sports due to COVID-19, Biola baseball opened its season with a two-game doubleheader loss against Azusa Pacific University at Eagles Diamond. The first game ended with a 6-4 loss and the second with a 10-8 loss.

Biola bats awoke late in the first game, but continued throughout the second game. Biola junior designated hitter Ryan Gallegos ended both games with two hits, two runs and two RBIs. He shortened APU’s lead by two toward the end of the first game. Senior right fielder Brandon Cody put Biola up on the scoreboard with a solo home run in the first game. Cody ended the day with four hits and three RIBs. Senior third baseman Jared Portaro began multiple innings with leadoff singles, which led to runs. Portaro ended the doubleheader with three hits, three scored runs and one RBI.
GAME ONE
In the first inning of game one, APU junior designated hitter Joseph Kim hit a two-run home run to center field, which just missed the glove of Biola senior center fielder Johnny Sage. APU ended the inning with a 3-0 lead. Biola bats began to awaken in the second inning when Cody hit a solo home run to left field. Both teams rallied in the eighth inning, earning two runs each. With two outs and two runners in scoring position, Kim hit another home run to center field which secured the win for APU. Being down by four runs, Biola shortstop Connor Kostecka began the eighth inning rally with a single. Junior catcher Ben Smith continued the rally with a single which sent Kostecka to third base.

Two batters later with the bases loaded, Gallegos hit a two-RBI single, which shortened APU’s lead by two. However, the late rally was not sufficient for the win. Biola ended the inning with bases loaded and back-to-back strikeouts by Cody and junior first baseman Jackson Collins.
GAME TWO
The bats continued hot throughout the second game of the day.  Throughout the game, both teams kept a close score. APU began the game with bases loaded when Kim hit an RBI single. Senior right fielder Nick Estrella followed with a two-RBI triple to put APU 3-0. APU ended the inning 4-0. Biola sophomore pitcher came from 30 scoreless innings but received four runs and three hits in the first inning.

Biola responded quickly in the first inning by scoring three runs, two were driven by junior second baseman Robert Anthony Cruz. APU took advantage of Biola’s defensive mistakes and increased the score to eight. On multiple occasions, Biola left-handed sophomore pitcher Larson Kindreich threw wild pitches, which allowed runners to advance into scoring position. After Kindreich was taken out of the game, APU scored four more runs. Both teams had multiple runs in the sixth inning. Biola was able to shorten the score by two runs, but it was not sufficient for the win.

The Eagles stand at 0-2 overall and in Pacific West Conference. Their next game is on March 20 at 12 p.m. and 3 p.m. at APU where they will face them in another doubleheader.