The coup in Myanmar demonstrates the need for democracy

Democracy should be protected, both here at home and abroad. 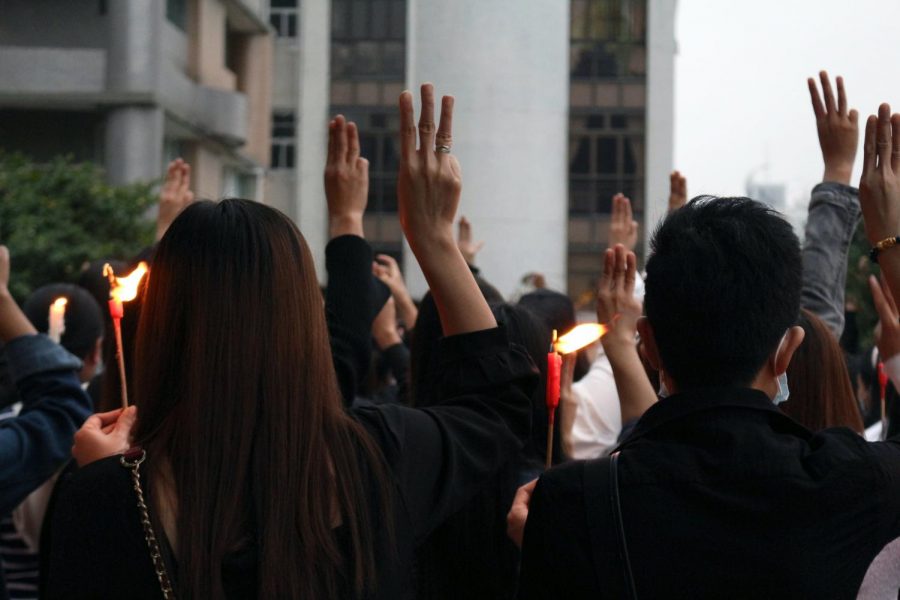 Vigil in support of the government of Myanmar, opposing the military coup.

The military seized control of Myanmar after a general election on Feb. 1. Although General Aung San Suu Kyi’s party clearly won, the military claimed widespread fraud and has yet to provide supporting evidence. In addition to military violence, Myanmar’s military has suspended licenses for a number of news networks, ordered internet companies to block Facebook, Instagram and Twitter, and has imposed nightly internet shutdowns.
RIGHT NOW IN MYANMAR
Nobel Peace Prize winner Kyi has been fighting for human rights in Myanmar for decades. Kyi spent nearly 15 years under house arrest between 1989 and 2010 for her peaceful resistance against Myanmar’s military regime. In 2015, Kyi led her party, the National League for Democracy, to win the first openly contested election Myanmar has held since 1990.

The military, refusing to acknowledge the results of the 2021 election, has called a coup, detained Kyi and is responding to peaceful protests with violence. Sunday, March 14 became one of the deadliest days since the beginning of the coup, when Myanmar security forces open-fired on a group of protestors killing at least 22.

Although military commander-in-chief Min Aung Hlaing has since claimed that the military action is defending the people and democracy, he is receiving heavy criticism from global leaders.
CONTINUING THE FIGHT FOR DEMOCRACY
Since the coup, President Joe Biden has approved sanctions on the leaders responsible and will freeze assets benefitting Myanmar’s government.

“We stand with the people who support their right to assemble peacefully, including to protest peacefully in support of the democratically elected governments, and the right to freedom of expression, including the freedom to seek to receive to impart information both online and offline,” said U.S. spokesman Ned Price.

Journalist Matthew Lee points out that although America boasted of Myanmar as a democratic success story, the coup exposes America’s inconsistency in maintaining relations with and supporting Myanmar’s democratic government. Myanmar’s military has evidently been sitting, waiting to pounce on the rights of the people. The sanctions are a nice gesture to show America’s support of democracy, but unless the United States consistently supports their efforts toward democracy, the coup has made it clear that their new government is not stable enough to sustain it.
SHUTTING DOWN THE PRESS
The violence in Myanmar is not just a threat to their own citizens. 38 journalists have been arrested in recent days, including Associated Press journalist Thein Zaw. Numerous reports have shared that journalists are not just being arrested, they are also being beaten for simply “doing their job.”

The Washington Post says it well: “Democracy dies in darkness.” Myanmar’s military clearly does not want the rest of the world to get involved in their takeover. Isolating their people is the easiest way to bully them into compliance. When journalists are not able to do their job by ensuring transparency between the people and their government—or a country and the rest of the world—there is a dangerous powerplay that will leave civilians at the mercy of a dictatorship.

Consider North Korea and China. Both countries have limited their peoples’ access to the outside world and are quenching any say the people have in the government or their freedoms.
THERE IS NO PERFECT PICTURE OF DEMOCRACY
Whether the average American citizen realizes it or not, we are involved and invested in the well-being of other democracies. The protestors on the streets of Myanmar are fighting for the freedoms we take for granted every day. When there was believed to be voter fraud in the 2020 election, the election results were challenged in the Supreme Court. The checks and balances of the American government have the ability to prevent what happened in Myanmar from happening in America.

But the attempted coup that occurred after the election proved that maintaining stability and giving power to the people is a difficult act to balance. It is the military’s job to guard individual freedoms, and the remaining branches’ job to check them. If America is determined to advocate for individual freedom, then the United States needs to continue to protect democracy within their own borders and become a better example of democracy.