The Eagles go into overtime and win against the Warriors, 2-1. 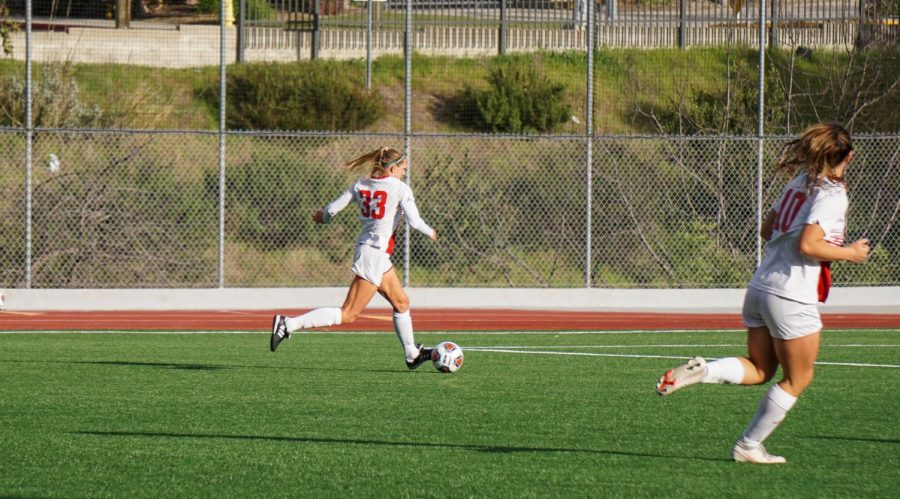 Biola women’s soccer redeemed themselves in Monday night’s game where they defeated the Westmont College Warriors, 2-1. The Eagles used last week’s scrimmage against Azusa Pacific University as motivation to work hard and gain another win before the end of their season. There were many opportunities for both teams, but ultimately Biola was victorious, 2-1.

At the top of the stat sheet for this afternoon’s game was sophomore midfielder Halie Jamir with two shots on goal and the winning goal made in overtime. Following behind was sophomore forward Mason Stansberry with the first goal made in the game. Senior keeper Briana Ruelas and freshman keeper Anna Boyer also had a total of seven saves in the game.
OVERTIME OPPORTUNITY
The first 28 minutes were back and forth between the Eagles and the Warriors. Many failed attempts to score were made from both teams, but Biola was able to grab the slight edge. At 29 minutes into the first half, Stansberry was able to break away and pass the Warriors keeper scoring her first goal of the game, as well as her first goal of the season.

Going into the second half, Westmont responded with a goal of their own, tying the game. Neither team was able to break the tie, sending them into overtime. At 93 minutes Stansberry set up the play, passing the ball to the outside to junior forward Ell Tinsley. Tinsley shot across to Jamir, who made the goal to win the game over Westmont, 2-1.

Women’s soccer (2-2) will return home to Al Barbour Field on March 25 at 7 p.m. against Azusa Pacific University for their last game of the season. Footage from today’s game is located on Biola Athletics’ website.