It is time to recall Gov. Gavin Newsom

Why California’s “do as I say, not as I do” governor needs to go. 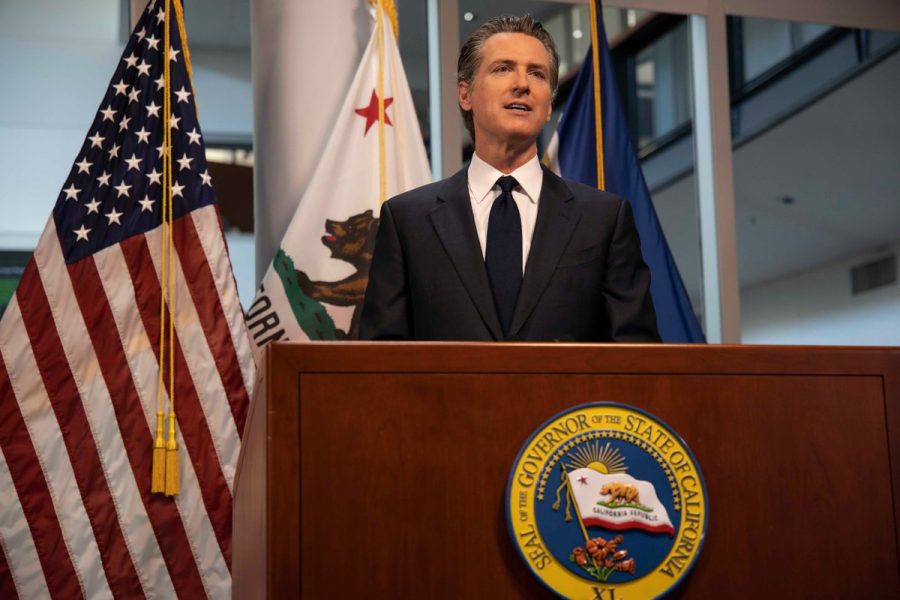 Lately, the Golden State has been looking a little rusty. With one of the nation’s highest homelessness rates, poor forest management and climate change threatening home safety, not to mention strict COVID-19 stay-at-home orders and curfews, many residents are upset and frustrated with the way Gov. Gavin Newsom has been leading the state—and they want him out.

Many of Newsom’s controversial actions and governmental overreaches during the pandemic sparked something of a rebellion against the “tyrant,” as his opposers call him. The Recall Gavin campaign has garnered support across the state by both Republicans and Democrats who are ready for a change. The minimum amount of signatures needed to call for a recall election is 1,495,709, about 12% of the state’s population, according to ABC 7. As of yesterday, the recall has just surpassed 2 million signatures.

Millions are fed up. At the beginning of the pandemic, even surfing was banned for a short period of time with beloved beaches fenced off, infuriating millions of Californians who craved nothing but fresh air and normalcy during turbulent times. Currently, California is the only state banning indoor dining. Newsom not only mandates these orders, but he has been caught multiple times breaking his own rules, causing a sharp decline in his approval ratings, according to The Epoch Times.
WHAT STARTED IT
Even before the COVID-19 pandemic hit the shores of California, many people were discontent with the way Newsom was running the state. California has the highest income tax rate at 12.3%, according to TurboTax. In public schools, many young middle school students are swamped with graphic sexual education, so extreme that parents have had to protest. Young children should be protected and treasured, not burdened with adult material.

Looking to purchase a single-family home in the state? You might need to get a second degree while you are here at Biola because the average home price is a whopping $700,000, according to The New York Times. Housing prices have skyrocketed over the past few years and many residents are making the difficult decision to leave the state. Bloomberg reports that California has become a “housing nightmare” for multiple reasons, including having the highest poverty rates.
WHAT FUELED THE FIRE
Heartbroken and shattered, restaurant owners and chefs are forced to choose between disobeying the law in order to make a living or to obey, remain closed and watch as their business fades. Up north, the SFGate reports that about 85% of restaurants in the area were forced to close their doors. The Guardian explains that last August data revealed nearly half of the state’s small businesses might shut down, which only increases the wealth gap and disproportionately harms minority small businesses as well. About a year into the pandemic, California residents are left facing a 9.0% unemployment rate.

Just this summer, Newsom told Californians not to sing in church. While church leaders must implement wisdom and continue to hold their services safely, the government should not overstep its boundaries when it comes to freedom of religion. Our nation was founded on this essential and vital right. Recently, the Supreme Court voted 6-3 in favor of allowing churches to continue indoor gatherings. So sing heartily to the Lord—but practice caution and wear your mask.

Many Southern California high school students have filed a lawsuit against Newsom, The Federalist reports. His ban on indoor sports has infuriated many young people who are left feeling helpless. They argued that since college athletes are able to practice and compete, they should be allowed to as well. Sports are important for many young people—not only for their physical well-being, but for their mental health as well. Even before the pandemic, young adults have been suffering from poor mental health, as suicide is the second leading cause of death for people 15-24. Sports often help give young people something to pour into.
BIPARTISAN DISTRUST
The Associated Press reported that the state of California has been keeping virus data secret and away from the eyes and ears of residents. They have been ignoring public records requests that ask for COVID-19 data, making it challenging for business owners, university leaders and all people to plan a safe and proper re-opening. Kate Folmar, the state’s Health and Human Services Agency spokeswoman, said they have kept COVID-19 rates and numbers private so it does not “mislead” or provide “uncertainty” for citizens, the Associated Press reported. However, refusing to share these rates has only created distrust and frustration between the people and state government. Newsom and his leadership need to be honest with their citizens.

Politicians like Bernie Sanders may tweet about the “right-wing” attempt to remove Newsom, but do not buy it. It does not matter if you lean conservative or liberal, whether you are a staunch Republican or a passionate Democrat—people from both sides of the political spectrum in California agree that Gavin Newson must go. His inadequate leadership has built insurmountable mistrust between his government and the people.

Recall elections do not happen often, but they are an example of the freedom Americans have—the ability to replace government leaders and remind them who is really in charge. The next few weeks will be very telling for the future of California. Golden State Christians must continue to fight for religious freedom, care for the poor and use wisdom in all things.