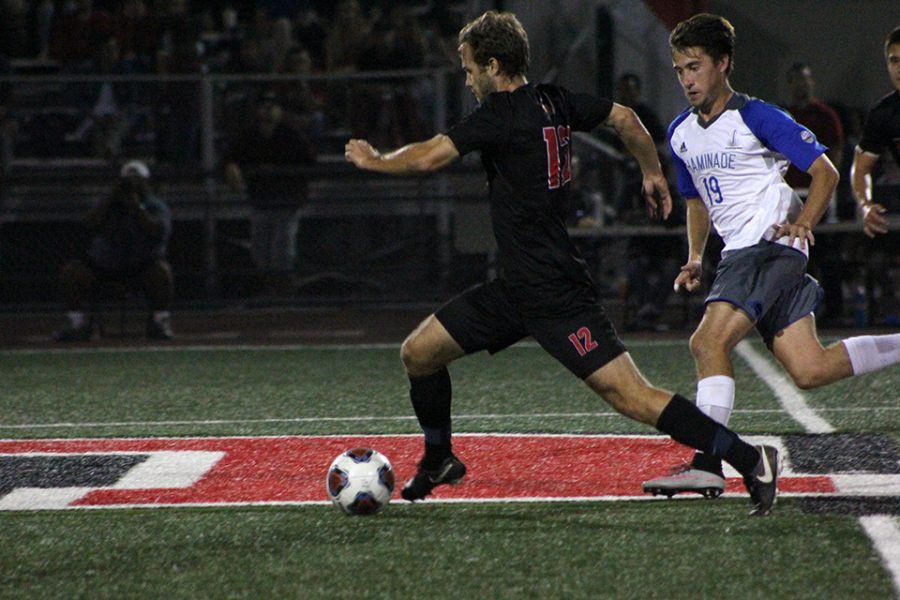 Biola men’s soccer earned their first win of the season Wednesday night against the Bethesda University Flames. The conditions on the field were wet and chilly after a day of thunderstorms and heavy rain, but the Eagles still gave it their all. Their hard work paid off as they defeated the Flames, 6-1.

The victory was a team effort and everyone contributed in scoring those goals. The team was led by junior defender Lawrence Kwazem who scored three goals for the night. Sophomore midfielder Gabriel Berthoud and sophomore defender  Ruben Neubauer achieved their first career goals. Junior midfielder Aidan Hill was able to score a goal and junior goalkeeper Mark Greenberg earned his first win while defending the goal.
SECOND HALF SHUFFLE
The first half was quiet for 30 minutes, but right at the 31:29 mark Berthoud set up Kwazema who broke the scoreless tie with the first goal of the match for Biola.The Eagles got right to it, adding to their lead in the second half. Junior defender and midfielder Henry Reeves assisted Hill just 10 minutes into the second half, making the score 2-0. Kwazema scored a second goal with an assist from senior midfielder Akhigbe “I-B” Unuigbe.

Kwazema was on fire and went on to score a third goal for Biola, putting them at 4-0. Kwazema assisted in getting Berthoud his first career goal. Neubauer scored the final goal of the night with just over 10 minutes of action remaining in the match.

Mens soccer (1-3) will have their final game of the season on Wednesday, March 24 at 3 p.m. at Eagles Field. Biola will take on Concordia University Irvine for a second time. The livestream can be found on the Biola Athletics page.