The miniseries is a creative reintroduction to Marvel following “Avengers: Endgame.” 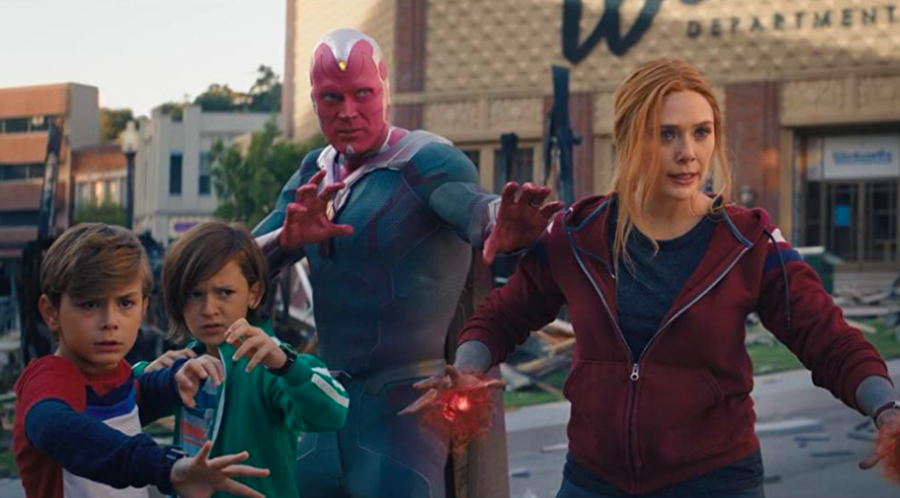 With nine Disney+ episodes packed with action and cliffhangers, “WandaVision” exceeded all expectations of Marvel fans. The episodes stretch across multiple decades and slowly morph into the classic Marvel style of excitement and humor. Arguably one of the most thoughtful and creative pieces to come out of the Marvel Cinematic Universe, “WandaVision” unveiled something fans have never seen before and is a perfect comeback after a seemingly perfect ending in “Avengers: Endgame.”
MIND THE GENRE GAP
Marvel has been known to not shy away from comedy. Though the main focus is typically action and epic storylines, the occasional lighthearted, comedic beats are what make Marvel films so family-friendly and enjoyable for all audiences. However, “WandaVision” takes a different approach under the disguise of a full-fledged sitcom. The first few episodes, in the style of sitcoms from different decades, seemed so eerily normal that audiences were desperate to discover the dark truth behind the normalcy.

Though the show transitions into more iconic Marvel action sequences later on, this genre gap seems like Marvel is dipping its toes into different styles. This could be an interesting setup for more variety to come in the future. The upcoming “Loki” series is already confirmed to be a crime show, and “Doctor Strange in the Multiverse of Madness” is to be a horror film—two genres that are also completely new to Marvel.
ENDGAME WAS NOT THE END
Though many Marvel fans seemed to agree that “Avengers: Endgame” was a proper ending to the franchise as a whole, the rogue superheroes proved that they are not finished yet. Even with classic characters such as Iron Man and Captain America left behind, “WandaVision” proved that the next phase of the MCU has the potential to be the greatest one yet.

Not only did “WandaVision” bring back beloved old characters, it also introduced a few brand new characters whose storylines will likely be developed in future film and television installments. The show brings in a new witch and a new and improved Vision. But Monica, a S.W.O.R.D. agent who obtains powers resembling those of Captain Marvel, is one of the biggest additions to the Marvel universe. Though her character seems to be left behind in later episodes, the show is a perfect setup for a future storyline with her.
MAKE WAY FOR THE SCARLET WITCH
One of the biggest themes of the show is Wanda, in a state of grief, discovering how far her powers can go. As Wanda dives deeper into discovering who she is, a whole new world of sorcery and witchcraft is revealed. With this comes multiple hints of connections to the world of sorcery in the upcoming “Doctor Strange” sequel. “WandaVision” has become the first MCU installment to refer to Wanda by her comic book name, the Scarlet Witch.

The ending of “WandaVision” leaves the next parts of Wanda’s journey unclear and left up for theorizing. However, the show already gives off the feeling that something big is coming up in the Avengers storyline, and the Scarlet Witch is going to be a big part of it.