Softball season is back with a split doubleheader 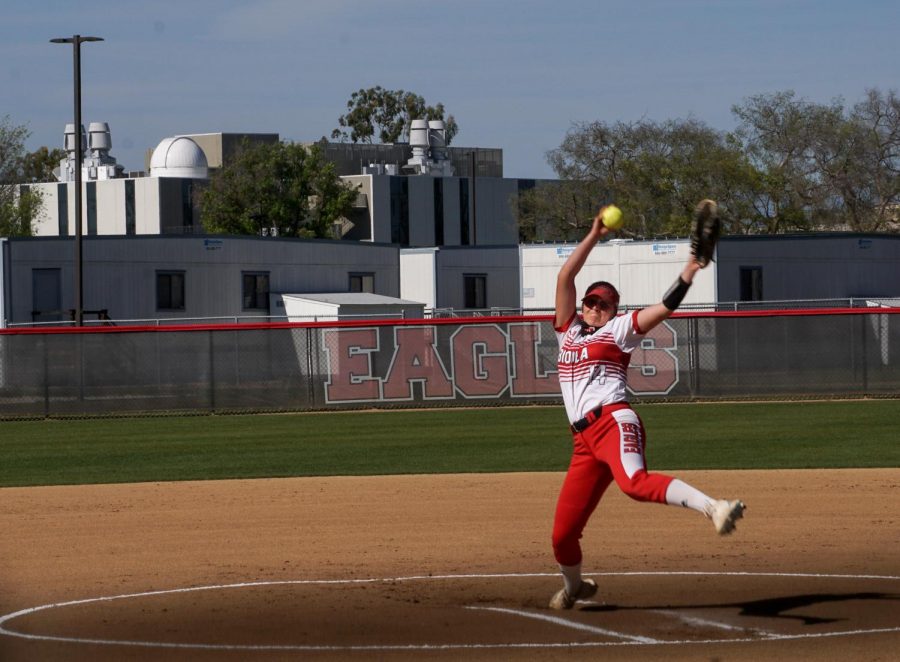 Biola softball is back and played their first games of the season at home in La Mirada, Calif. against the Hope International University Royals on Friday afternoon. Biola competed against the Royals in a doubleheader match up, playing their first game at 2 p.m. and their second game at 4 p.m.

Biola had a slippery start on the field and they lost to HIU 0-1. However, the Royals’ first point turned out to be insignificant and the Eagles were able to continue a good defense. Throughout the game there were multiple base hits and junior pitcher Paige Austin brought the heat against the Royals striking out multiple players during the first game. The score from HIU came early in the game but Biola was able to prevent any more points to be made.
CATCHING A COMEBACK
The Eagles were able to set their loss aside and make a comeback in game two. The first inning started off discouraging as the Royals scored the first two points. The Eagles eventually matched this by making two points in the first inning as well. Junior middle infielder Kylie Velasco bunted the ball sending sophomore outfielder Jennifer Morinishi to second base, ultimately bringing junior Ruth Munoz in for the first point of the season.

The Eagles prevented the Royals from scoring the rest of the game and added to their score in the first, third and fifth inning. The final point in the sixth inning was gained by freshman middle infielder Loren Meza getting a RBI to load all bases and send in sophomore outfielder Sicili Brittingham to score. The Eagles secured their first victory of the season, defeating the Royals in game two, 6-2.

The Eagles’ women (1-1) will go up against Azusa Pacific University in a doubleheader at home on Freedom Field. The first game is March 6 at 12 p.m. The livestream is available on the Biola Athletics website.