This biographical documentary zeroes in on an illustrious athlete’s rise to success and his struggles to maintain it. 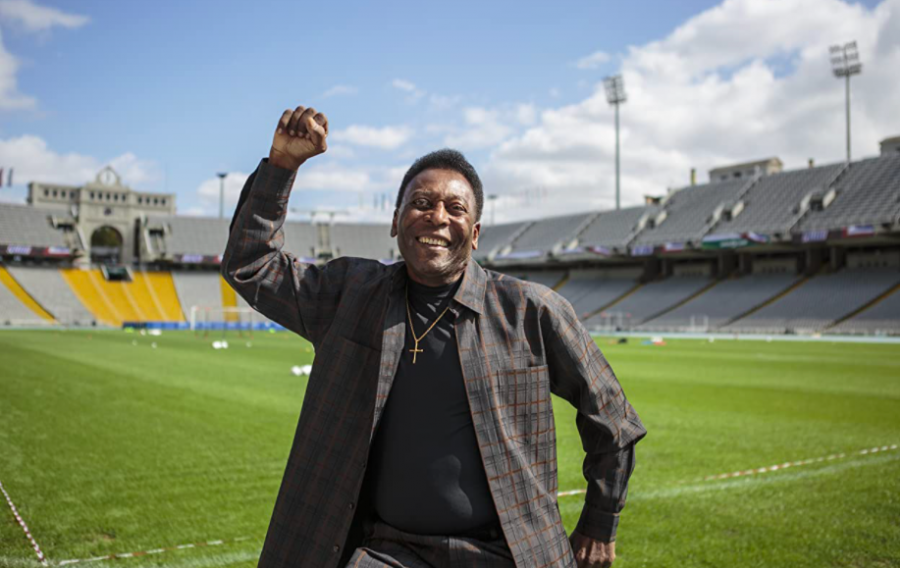 Three World Cup wins, 1,279 goals in 1,363 games and a spot on the Time 100 list of the “Most Important People of the Century”—these are only a few highlights of Edson Arantes do Nacimento’s career. The fabled achievements of Nacimento, better known as Pelé, are newly chronicled in a full-length documentary from Netflix, released February 23. Directed by David Tryhorn and Ben Nicholas, who previously collaborated on 2016 track-and-field documentary Crossing the Line, “Pelé” is a casual, down-to-earth conversation that comprehensively chronicles the ups and downs of the Brazilian footballer’s tenure.
FACE-TO-FACE
The film’s narration is built around unscripted, first-hand interview sessions with Pelé and his friends and former teammates. Viewers be aware, a large portion of the documentary is subtitled, as most of the interviewees speak Portuguese.

Pelé, a natural storyteller, is a truly captivating interview subject. His commentary and insights are colorful, personal and often heartfelt. While describing his journeys to World Cup victory, he occasionally breaks down in tears.
ON THE FIELD
The story starts small as Pelé recounts his humble upbringing in rural Brazil, complete with black-and-white photos from his youth.

“My background kept me level-headed, and still does,” he said.

At age 16, Pelé became a professional footballer, joining the Brazilian national team and attending the 1958 World Cup in Sweden.

The film’s greatest triumph is its use of dynamic, in-depth archival recordings. Crackly vintage footage of the World Cup, complete with colorful narration from sports commentators and intimate shots of the Brazilian team’s camaraderie, serves as a window back in time.
A STAR IS BORN
By bringing the Brazilian national football team to a World Cup victory in 1958, Pelé completely reinvented Brazil’s international presence, helping his people overcome attitudes of inferiority.

“He made Brazilians love themselves again,” a friend of Pelé said in an interview. “It’s not that Pelé made the difference. Pelé was the difference.”

Suddenly both a household name and a national hero, the irresistibly charming teen became the subject of feverish infatuation from the Brazilian public. According to a friend’s words, Pelé basked in the glory and attention “as if it was built into his DNA.” Through masterful documentation, “Pelé” allows viewers to vicariously experience its titular star’s overwhelming success.
HARD TIMES…
Through footage of protests and coups, viewers are introduced to the wanton political upheaval of 1960s Brazil. Pelé describes the uncertainty and trepidation he felt as he found himself caught in the midst of shifting cultural currents. He faced constant pressure from the world around him—including pressure to pick a political side. But even as a dictatorial regime rose up around him, Pelé continued to commit to his passions.

“You forget your principles once the ball starts rolling,” one of Pelé’s teammates said.

The film demonstrates how the harsh reality of a career in professional sports slowly sank in for Pelé, presenting increased responsibilities and greater burdens.

Pelé’s unfulfilling performance in the 1962 World Cup left him stuck in a mid-career crisis. The film walks viewers through this motivational dry spot, as Pelé details how he became self-conscious about his bodily capabilities.

Along with his dwindling competitive spirit, Pelé also faced opposition from a coach named João Saldanha, who stirred up negative press attention in an attempt to kick him off the Brazilian football team.
…AND GOOD TIMES
With time, though, Pelé’s attitude shifted. By the 1970 World Cup, he had found personal growth and a renewed purpose.

“Winning became non-negotiable for him,” one of his friends said.

In clips from the game, which show Pelé triumphantly running down the field, his pride and confidence is palpable. Viewers see someone who truly dominates his craft.

“Pelé” is more than a documentary; it’s an art gallery of sorts. The film throws together a dizzying array of photographs, soccer game clips and interview excerpts, combining footage of Pelé’s life with footage of the world events that permeated it. “Pelé” both glorifies the sports idol and acknowledges his shortcomings, throwing in analysis of his game strategy along the way. Inspiring and thought-provoking, it is the perfect documentary to watch on a lazy afternoon.