The Eagles have yet to win a game in this pandemic-shortened season after another loss to Point Loma Nazarene University. 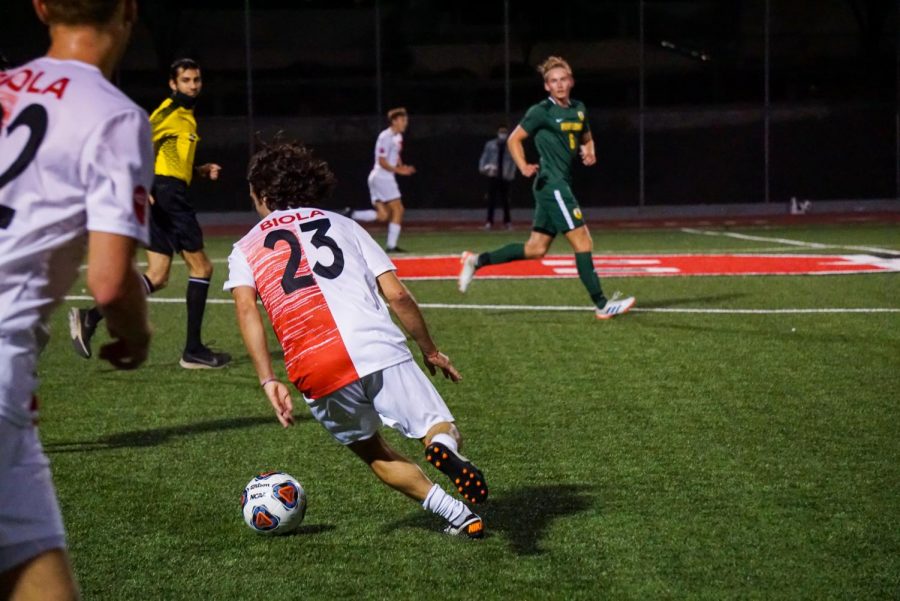 Photo by Natalie Hernandez // THE CHIMES

Junior midfielder Aidan Hill in possession of the ball against PLNU.

Men’s soccer hit Al Barbour Field last night looking for redemption after a previous loss against the Point Loma Nazarene University Sea Lions. What was a slow start to the game turned stale for the Eagles in the end, as they lost, yet again, to PLNU, 0-1.

It was a confetti dropping of yellow cards, as nine total were handed out, five on Biola’s end and four toward Point Loma. The Eagles took only 10 total shots with three on goal while the Sea Lions found more offensive opportunities with 16 total shots and seven on goal.

PLNU did have a downfall to their victorious night. They earned 18 fouls as opposed to Biola’s six. Regardless, the Sea Lions digressed and rallied on. Even with Biola tallying six saves on the night, they were one save short, as Point Loma was able to find a goal in the second half, winning the game 1-0.

The Eagles (0-3) will head to Irvine, Calif. on March 3 at 3 p.m. to take on Concordia University Irvine in their second matchup of the shortened-season. Livestreaming of the game can be found on the Biola Athletics page.