This disaster gives us a much-needed lesson in healthy interdependence. 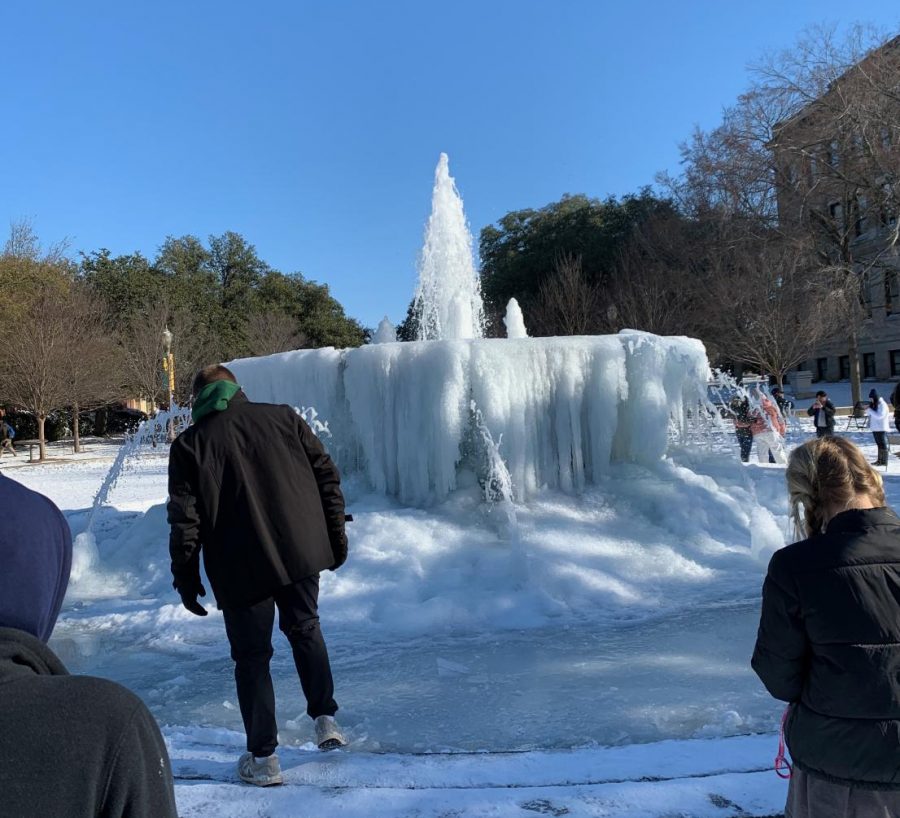 A fountain froze over on the campus of Baylor University in Waco, Texas.

Texans have been facing dire circumstances this month as a result of an unusual winter storm that has left millions without power and clean water. At least 58 people have died. As the storm runs its course, we should be banding together to help them out of this crisis—not making fun of Texans for problems they did not cause and a “bootstrap mindset” all may not ascribe to.
DESPERATE TIMES
People have been freezing to death in their own homes. One young boy in Houston played in the snow for the first time one day, and tragically did not wake up the next morning due to hypothermia. An elderly man died just outside his home as he went to his car to fetch an oxygen tank. Carbon monoxide poisoning cases have increased as people are desperate to keep warm. Three children and their grandmother died in a house fire when they, supposedly, left their fireplace burning overnight. The real death toll will not be fully known for weeks, but the deep grief has already begun.

Dozens of these deaths can be attributed to the widespread power outages that left millions without heat, which is in large part due to the state’s failing power grid. The Electric Reliability Council of Texas, or ERCOT, controls most of Texas’ access to power. Experts have said that they were grossly unprepared for the storm and sub-freezing temperatures. After a similar storm that revealed system failures in 2011, officials say little to no changes were made to prevent a similar disaster. Texas power companies were more focused on saving money than keeping their systems up to date and prepared for a worst-case scenario.
“PULL YOURSELF UP BY YOUR BOOTSTRAPS”
The independence and pride of Texas has a long history—much of it stemming from Texans’ desire “to protect the institution of slavery” as they fought for independence from Mexico, says Angela Diaz from Texas Tech University’s history department. The state was its own country for seven months in the 1830s, and that is a source of pride for many Texans. But regardless of the source of the pride and independence they are known for, that which they prize the most could be a feasible explanation for the magnitude of destruction this storm caused.

Tim Boyd, the now former mayor of Colorado City, Texas, posted a very insensitive statement on Facebook detailing how he believed everyone should just help themselves through this crisis.

“No one owes you [and] your family anything; nor is it the local government’s responsibility to support you during trying times like this! Sink or swim it’s your choice!” Boyd says. “Only the strong survive and the weak will [perish].”

He later acknowledged the insensitivity of his phrasing, and posted again saying he had resigned. This “pull yourself up by your bootstraps” mentality blames those who are disenfranchised for being “lazy” when you may not even know their full story. This way of thinking is also ableist, as well as having been used to promote white supremacy.
OUR RESPONSE
If we want to get technical, the “bootstraps mentality” is not realistic, nor is it biblical. Independence is only good to a certain extent. On the wide spectrum of co-dependence to independence, we should fall in the middle at the place of interdependence. It is good, healthy even, to rely on others. That is what community is for, and God calls us to live in community with other believers. Additionally, we should be fully dependent on God and avoid striving in our own strength.

Many disagree on what policies should be implemented to keep this crisis from happening again, but we should all agree that anyone in need deserves help—not accusations, pity or prideful suggestions on how to “better themselves.” We should remember that not everyone has had the same life experiences we have. We should have compassion for those who suffer.