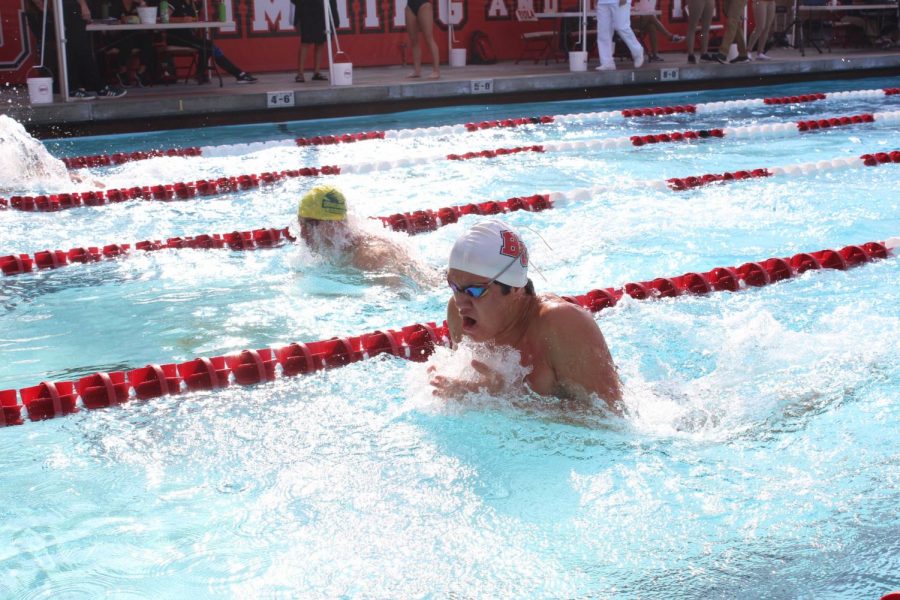 The women also made NCAA qualifying standards. Junior Katelyn Harper qualified in the 400 IM with a finishing time of 4:28.78. Following was sophomore Kolya Vos in the 200-meter freestyle finishing at 1:52.58. Both were better than the ‘B’ standard. Vos also made the qualifying standard in the 100-freestyle with a time of :50.84.
BREAKING RECORDS
Freshman Matthew Trejo was the first to break a Biola record, finishing at 50.47 seconds in the 100-meter butterfly. He beat Biola’s previous record and it is now his personal best. Freshman Meghan Tolman annihilated the women’s 100-meter breaststroke with a finishing time of 1:03.20. The record was previously held by Biola Athletics Hall of Famer, Lisa Tixier.

Smith smashed the previous record for the 100-meter backstroke, finishing at 50.93 seconds. Another broken record was in the 200-meter medley relay. Smith, Trejo, sophomore Jonas Huckabay and sophomore James Gamette finished at 1:33.64, beating the old record of 1:33.80.

The Eagles’ women (4-0) and men (2-1) will go up against Cal Poly San Luis Obispo at the Anderson Aquatic Center, Saturday Feb. 27.