A snapshot of Biola’s finances during COVID-19

Biola is managing to stay afloat in the midst of a pandemic that has left many financially unstable. 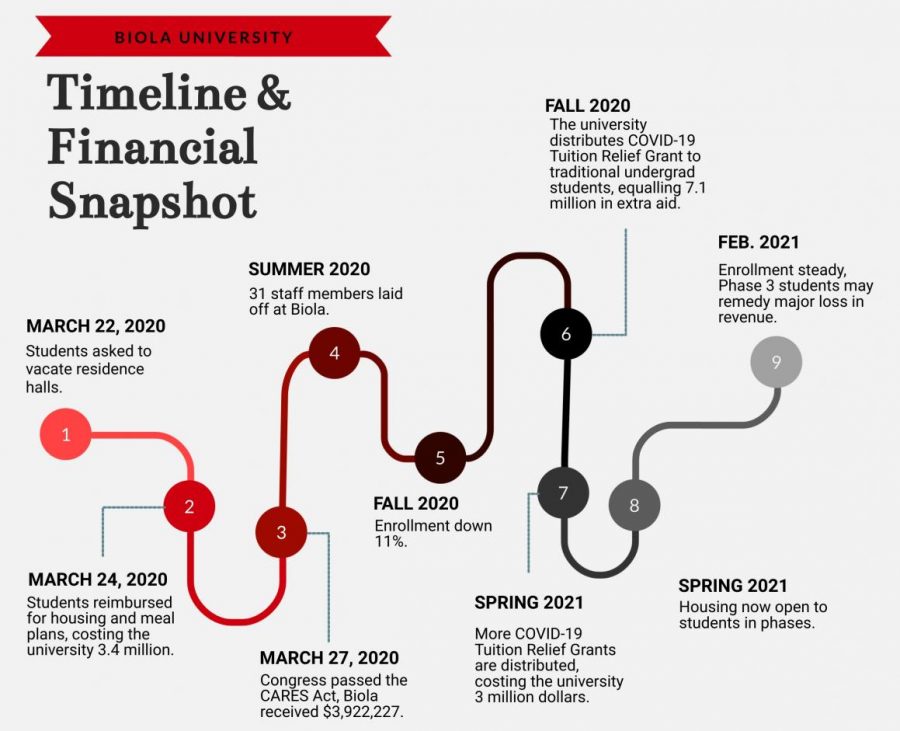 Despite higher enrollment rates than expected last year, Biola has cut expenses and downsized staff in order to combat the financial stressor of the coronavirus pandemic. Even with the lack of housing revenue, the university is managing to withstand a financially challenging season.
FINANCIAL IMPACT OF COVID-19
Last fall enrollment was down 11%. However, as the spring semester rolled around, enrollment spiked back up, according to Vice President of Enrollment, Marketing and Communications Lee Wilhite.

“We’re seeing twice the number of re-admit students coming again to enroll which is really encouraging,” Wilhite said. “We exceeded our revised undergraduate goal for spring semester based on the fall counts.”

Despite enrollment spikes, Biola still has to account for the loss of millions in housing revenue, according to Vice President of University Operation and Finance Michael Pierce.


HOUSING
A large part of the university’s income stems from housing, but with the pandemic putting on-campus living to a halt, it has become a major financial stressor for Biola, according to Pierce. However, Wilhite said that Phase 3 will bring hundreds of students back onto campus, which may remedy the lack of housing income caused by the pandemic.

Since COVID-19 restrictions call for one person to a room, living in single rooms will be discounted so that they will be the price of a double occupancy, which is slightly cheaper.
CARES ACT
On March 25, then-President Donald Trump signed the “Coronavirus Aid, Relief, and Economic Security Act” which provided roughly $14 billion to the Higher Education Emergency Relief Fund. This act allotted $4 million to be equally distributed between students and Biola, according to Pierce. On Dec. 28, Trump signed another financial relief act in which the university will receive $6 million.Two million of that sum is required to go to students. After this aid is received, the university will be audited to ensure the money was distributed correctly.

“Our fiscal year end is June 30, so we had an audit of that and we were fine,” Pierce said. “But now, there’s new requirements and new legislation so we just have to make sure we’re clear with that.”

The $4 million allotted to the university through the new stimulus package will go largely toward paying off debt payments. Specifically, it will help satisfy the monthly mortgage payment on Blackstone Hall.
$10 MILLION IN AID TO STUDENTS
Although tuition will not be reduced, students received a COVID-19 Tuition Relief Grant similar to the one distributed last semester. Any additional financial support will be need-based and can be adjusted as necessary, according to Pierce.

“Those scholarships amounted to, in total, about $7.1 million of additional student aid,” Pierce said.

Last fall, the COVID-19 Tuition Relief Grant amounted to $2,000 for each traditional undergraduate student. This semester, Pierce said the grant would be $1,000 per student, which means the university will be paying an additional $3 million in aid, totaling $10 million in extra aid this academic year.

Additionally, room and board rates are being prorated based on the amount of time a student chooses to live on campus. Phase 3 students, who tentatively will be living on campus for two months, will not pay as much as Phase 1 students who have lived on campus since January.
FINANCIAL GAME PLAN
In order to account for the millions of dollars lost to additional scholarships and the significant loss of housing revenue, the university terminated some employees last summer and displaced the retirement plan, according to Pierce.

“We’re doing everything we can to sacrifice to make up for the loss in room and board revenue,” Wilhite said. “And even tuition revenue from students that didn’t opt to enroll this fall.”

Along with downsizing staff, Pierce said the institution has been able to save expenses related to traveling and cancelled student events.
RECRUITMENT METHODS
With the loss of in-person campus tours, Biola Bound events, university day and other former methods of recruitment, the university has reformatted its content and events to a virtual experience.

“We’re seeing that because some students maybe wouldn’t feel comfortable traveling,” Wilhite said. “We’re actually seeing pretty healthy numbers of students that are taking part in those online, virtual experiences as well.”
MOVING FORWARD
Though the university has taken a huge financial hit due to the pandemic, the Board of Trustees is also contributing to the university’s livelihood.

“Many of [the Board members] have donated substantially to the institution to help with finances and to help students,” Pierce said. “There’s a hope in crisis fund that’s been, that we’ve been fundraising for and some of those trustees have stepped up to donate to that.”