“WandaVision”continues to excite with a Halloween twist 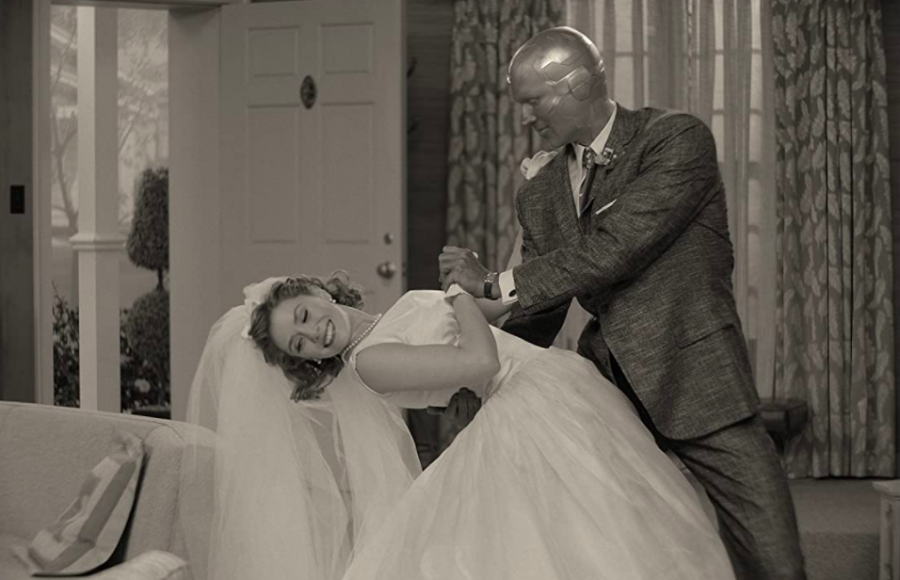 The Marvel Cinematic Universe’s first series on Disney+, “WandaVision” reinvents Marvel storytelling with its time-bending storyline and chaotic, fascinating characters and plot. With comedy and increasing intensity, this satirical series adds depth to the formulaic and often tiring superhero franchise, giving loyal fans weekly enjoyment during quarantine.
NODS TO THE PAST
“WandaVision” features nostalgic installments that pay tribute to a number of iconic suburban television shows, such as “I Love Lucy” and “Bewitched.” While younger generations may miss some of the commentary and tributes to these famous sitcoms, “WandaVision” aims to tell intriguing stories from diverse points of view—something different from typical Marvel storytelling.

While fans of the MCU may find this new method of storytelling to be muddled and even too chaotic to follow, the series continues to solidify its central storyline and encourages a slow burning plot.
NEW CHARACTERS, NEW THEMES
Each episode of “WandaVision” brings a drastically different time, setting and theme for Wanda and Vision to navigate. In the most recent installment of the series, episode 6, Wanda and Vision inhabit the ‘90s during the Halloween season. The writers make clear connections to the popular television series “Malcolm in the Middle.” Wanda and Vision navigate their abilities in suburbia, but also raise children and try to conform to American culture.

Not only do the characters find themselves in a new decade every episode, but they also add new characters. Wanda’s brother, Pietro, played by Evan Peters is brought into the mix, an addition that is certainly emotional for fans after his death previously in the MCU series. Kat Dennings, known for her work in 2 Broke Girls, also makes an appearance as an FBI agent in the fourth episode. With  extreme unpredictability from the series, these additions make for fun surprises along the way.
FROM BLACK AND WHITE TO COLOR
The first episodes of “WandaVision” are short, choppy and often end with confusing plot twists and multiple storylines that are disjointed. But as the series progresses into the sixth episode, answers begin to unravel and the action-packed adventure Marvel is known for begins to reappear.

For those uncertain about the direction of the series, Disney helps to make sense of the jumbled plot and allows for adventure that still jumps back and forth in time. It also includes traditional superhero storytelling, while balancing suburbia satire flavored by television history. Though at times bland and slow burning, “WandaVision” takes a turn toward more colorful storytelling by the middle of the series.
THE ‘90S AND BEYOND
As expected, writers combine both the past and present and merge television from a handful of decades, keeping to a small group of characters. While a bit more violent and suspenseful than previous episodes, “WandaVision” still centers around family and those who do not fit in, filled with colorful characters with unique abilities. Uncertain of the trajectory of the series, audiences are certain to find humor, family and a new, innovative decade for both Wanda and Vision in next week’s episode.