Women’s basketball adds another loss to their season 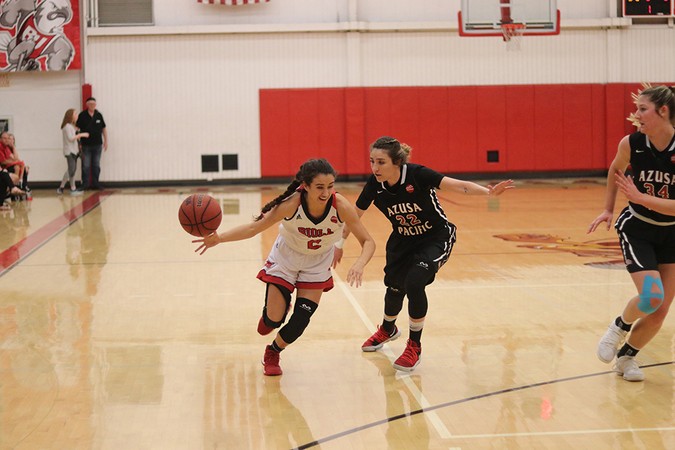 It has been a rough road for women’s basketball. The Eagles lost their sixth game this season against the Azusa Pacific University Cougars in Azusa, Calif. this afternoon, 57-62.

Regardless of being defeated, Biola was up a majority of tonight’s game. Sophomore forward Jordan Rabe topped off the stat sheet with 19 points and 10 rebounds. Freshman guard Laila Walker following close behind with 17 points. Sophomore guard Stephanie Lee contributed to the game scoring six points and two rebounds.
FOURTH QUARTER FAIL
The Eagles came out into the first half fighting and thriving. In the second quarter the women were able to gain a 17-point lead leaving the score at half time, 36-19. Going into the second half with a lead gave the Eagles confidence.

There were 18 quick turnovers and the Cougars managed to catch up, tying the game 38-38 with 2:38 left in the third quarter. The Eagles overpowered and were up, 46-44. The hustle carried into the fourth, but the Cougars passed up the Eagles. With only five minutes left the Eagles were only down by one but their efforts were not enough as Biola lost to the Cougars 57-62.

The Eagles (1-6) will return home to Chase Gymnasium with the Cougars on Saturday, Feb. 13 in a back-to-back matchup starting at 2 p.m. The live-stream game footage is available on Biola Athletics’ webpage.