“The Dig” brings a tale of transformation, loss and archaeology to Netflix

The no-frills, well-acted 1930s period drama is not afraid to get its hands dirty. 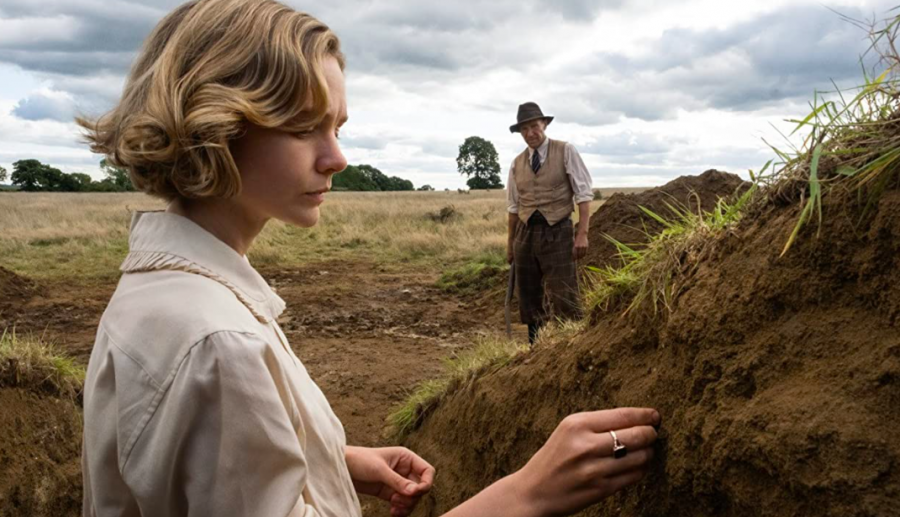 In recent Netflix historical drama “The Dig,” Edith Pretty wants to bury her past. Crippled both by physical health issues and her husband’s death, she struggles to support her young son’s future. When Pretty realizes a large mound of dirt behind her house might be an ancient burial site, she consults archaeologist Basil Brown. Suddenly, Pretty’s taxing day-to-day existence is permeated by an unexpected experiment that adds a new dimension to what she already faces in her daily life.
BACK IN TIME
For his second-ever film, Australian theater mastermind Simon Stone displays directing sensibilities usually reserved for stage plays—and the result is immersive. Filmed on location in Suffolk, England, Netflix original “The Dig” transports viewers to a sweeping, understated countryside, presenting a visual color pallet of muted earth tones.

Based on the 1938 Sutton Hoo excavation, which uncovered an unprecedented amount of early Anglo-Saxon artifacts, “The Dig” is about finding the extraordinary among the commonplace. With its genuine, day-to-day interactions between characters, “The Dig” feels less like a historical period drama and more like a glimpse into a journal. As Pretty, Brown and the digging crew unearth the archaeological site, they also uncover conflicts and emotions.

“The Dig” takes place in a world where whispers of war are ubiquitous—on the radio, over loudspeakers and in everyday conversation. However, instead of fixating on the prospect of international conflict and Nazi invasions, Brown sets his mind on ancient treasure and hidden burial chambers.

Brown and his crew are forced into a race against time. If the combat of World War II begins in earnest, the excavation will have to be aborted. In a grassroots effort to learn about history, a community of kindhearted men and women pour themselves into the seemingly preposterous project, shoveling dirt and swinging pickaxes. These sequences of joyous exploration and discovery are the most delightful aspect of the film—characters toss around factoids about ancient people groups and the composition of iron as if they are discussing the weather.
TREASURE TROVE OF CHARACTERS
Although Brown faces uncertainty about his purpose, he recognizes that his commitment to the study of archaeology comes from a pure-hearted passion and talent, not a lust for recognition and wealth.

“I do it ‘cause I’m good at it,” he says. “You can show me a handful of soil from anywhere in Suffolk, and I can pretty much tell you whose land it’s from.”

In a brilliant portrayal from Ralph Fiennes, who viewers might recognize as Voldemort from the “Harry Potter” movies, Brown is simultaneously rustic and sophisticated. With his wrinkled, worn face and ever-present fedoras and berets, Brown feels like a more jaunty, self-conscious Indiana Jones.

Brown has an almost childish excitement for his craft—and as Pretty invests herself in the project, she mirrors this excitement, peeling back her world-weary veneer. Pretty and Brown become close companions as Brown’s pet project brings newfound light into her life.

BAFTA-winning actress Carey Mulligan brings a hint of glamour and panache to the role of Pretty, vacillating between confidence and pessimism as the unexpected beauty of the dig contrasts with her harsh reality.
DO THE MESSAGES AND PLOT STRIKE GOLD?
“The Dig” loses track in its third act, struggling to balance its many subplots, such as how archaeology worker Peggy Piggott, portrayed by Lily James, deals with her husband’s unfaithfulness. The film addresses Piggott’s difficult relationship honestly, which is worth applauding, but it does so in a way that distracts from the main narrative.

Ultimately, “The Dig” is not about archaeology but about people. It is a shame, then, that the movie cannot seem to decide what aspect of its characters to focus on. Does it want to address Pretty’s deteriorating mental and physical health? Brown’s devotion to his craft? Piggott’s romantic entanglements? With its many touching moments, “The Dig” tries its best to wrap up its characters’ destinies, presenting a mildly imperfect—but overall satisfying—cinematic experience.

“The Dig” is realistically anticlimactic, flipping the rags-to-riches formula on its head.

Although a literal treasure trove emerges from Pretty’s backyard, bringing her financial reward and nationwide attention, she is not pleased by her windfall but rather despondent at the futility of material wealth. “When we die and we decay, we don’t live on,” she says.

Although “The Dig” celebrates seizing the day and finding joy in the unexpected, it is also a cautionary tale, solemnly reminding viewers of the transience of earthly gains and accomplishments.