The Church needs to re-evaluate its approach toward the LGBTQ

Christians are called to love, not hate. 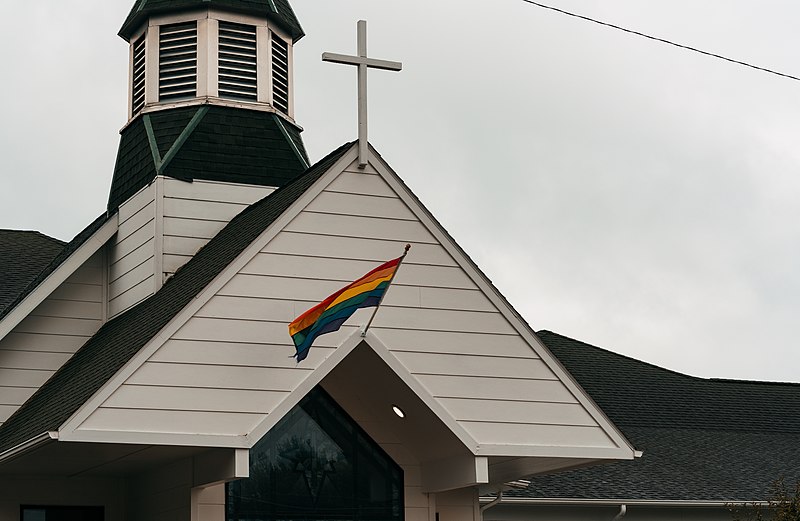 The Church is not a house of saints, but rather a home to sinners. No Christian is without sin and every congregation exists to walk with each other in the faith and encourage Christ-like behavior. It does not matter whether a person struggles with greed, dishonesty, gossip or disobedience of any kind—church is a place to come as you are.

Yet, homosexuality is one of few sins that most churches react with unfriendliness or flat out rejection. Church-goers are so reluctant to listen to LGBTQ experiences that they would rather kick gay people to the curb altogether. This is not the gospel method. If we are to reach this community and reconcile with our history of hatred, churches need to welcome the possibility of a gay Christian.
THE GOSPEL FOR ALL
Compared to their straight counterparts, members of the LGBTQ are significantly less religious, despite the majority growing up in religious households. Something has gone wrong in church if nearly an entire community has abandoned Christianity because they feel unwelcomed.

As Christians, it is our duty to spread the gospel message to further cultivate our relationship with God, but ultimately salvation is between each person and the savior. Gay people should not be turned away from churches based on their presumed salvation status—because that is what it boils down to. Churches do not believe that a gay Christian can exist.

It is as though the Church has forgotten that Jesus spent his time with the lowly and the outcasts, not the religiously upright. Christ’s response to the religious leaders criticizing him dining with sinners was to recite the parable of the lost sheep. His love is so great, that he would leave 99 sheep to search for one lost lamb. He protected the adulteress, defended the prostitute and promised heaven for the tax collectors and thieves. Of course, Christ called for these people to turn from their sins, but the saving grace of the gospel was extended to them when the world told them otherwise. Are we sending the same message to LGBTQ people today, or has the gospel reverted back to the Pharisees’ standards?
THE SOCIETAL CONSEQUENCES
Religion has not only played a role in the rejection of the gay community from places of worship, but also from society itself. Of the 1.6 million homeless youth in the U.S., 40% identify as LGBTQ. The leading cause of this atrocity is religious parents rejecting their own children from their homes.

But even those resolutely hidden in the closet suffer from religion’s image of the LGBTQ. Throughout history, gay people were excluded from several privileges of society because religion believed they were unnatural and wrong—subhuman enough to be included in the Nazi’s reign of terror and neglected during the AIDS crisis. Although the perception of them has improved in modern times, the influences of the past are still prevalent. Many still suffer from the depression and self-hatred when they ultimately fail to pray the gay away and the resulting suicide rates are astronomical.

There is still much work to be done to mend the damage Christianity alone has inflicted on the LGBTQ community and it needs to begin with church.
BIOLA’S EXAMPLE
While Biola is not a church, it has laid the groundwork for restoring the relationship between sexuality and faith that churches should imitate. Biola has taken steps that almost no other Christian university has pursued by not only initiating discussion—not merely reciting condemning verses—about homosexuality in chapels, but also by providing a safe space for the Christians on campus who experience same-sex attraction. The Dwelling is a school-sanctioned group, led by Spiritual Development, that actually considers the intersection between faith and sexuality and guides students to think critically about what they believe without judgement. Biola did not need to change their doctrine to achieve this. The university still holds fast to the belief that acting on homosexual behavior is a sin, but they have prioritized love over hate as a response to this conviction.

The Catholic Church has recently promoted a similar approach. Pope Francis spoke out in support of civil unions between gay couples but clarified that the Vatican still adopted the stance against homosexuality. The intention of his speech was to press for the legal rights of the LGBTQ outside of the church because gay people are still “children of God” and deserve the same privileges. It was a message of love.

The gay community is aware of the church’s beliefs. Whether or not the Church has made it clear to them that it still deeply cares and loves them despite these beliefs is the issue that must be addressed.
THE CHURCH MOVING FORWARD
The divide of “us” versus “them” has plagued the relationship between the church and the LGBTQ for centuries, but the division is not so clear cut. When we take into account the existence of gay Christians, it becomes an argument of “us” versus “oursleves,” inciting a comparison of which sin is more acceptable than another. All sin is equal in the eyes of God and Church should not be a place that separates based on sin. Instead, it should be a house that unites us all through Christ.

In the eyes of the shepherd we are all valuable to him and to the flock—gay or straight. We are all still sheep.