Thanksgiving has fed us a false narrative

Whether you celebrate this holiday or not, we should remember the work of decolonization best exemplified through the lives of indigenous people. 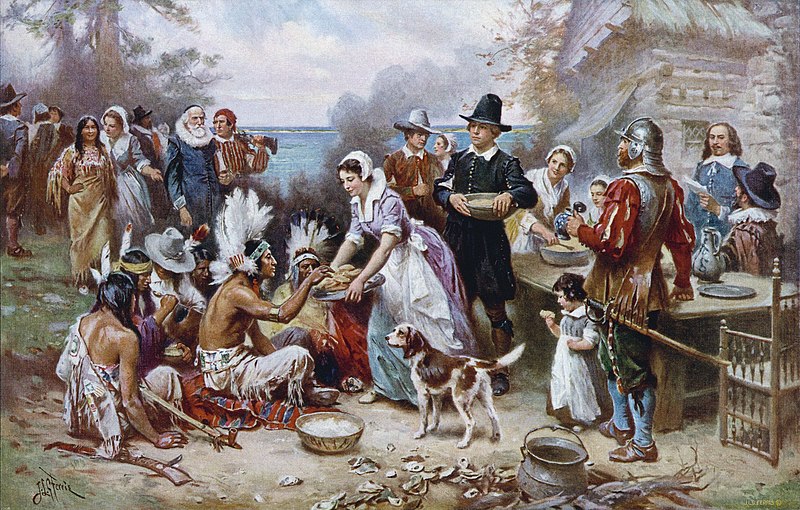 Thanksgiving is like the middle child of holidays—it sits between its two highly consumeristic and attention-seeking siblings, Halloween and Christmas, and gratefulness is quickly forgotten in the frenzy of Black Friday. It is truly an American holiday: we overeat, watch football and partake in messy family gatherings.

But for many, especially people of faith, this holiday is an intentional time to prioritize thankfulness. And though most adults probably do not consciously think about the story of “the first Thanksgiving,” or consider the meaning behind the celebration while eating turkey and potatoes, that story has shaped Americans’ views of indigenous people and colonization. The story that has been recycled and taught to children in school is an oversimplified and tunnel-visioned view of native-settler relations.
THE STORY
Harvest festivals were taking place in colonies around the continent before 1621, and indigenous people have had a custom of giving thanks throughout their daily lives pre-European contact. However, the gathering of the Puritans and the Wampanoag tribe in the Plymouth colony was the thanksgiving chosen to represent the holiday we celebrate today. Who “had it first” is highly contested. It is even possible that the first Thanksgiving was observed by the settlers at Plymouth to celebrate their massacre of the Pequot tribe in 1637.

The details around that feast vary depending on the source, so we may not ever know what actually happened. But regardless of when the first thanksgiving took place, the general story we have all learned in school is about grateful European settlers and kindly Natives, namely Squanto.

When George Washington issued the first proclamation of “a day of public thanksgiving and prayer” for the last Thursday in November in 1789, there was no mention of the feast of 1621. Neither was it brought up in Abraham Lincoln’s declaration in 1863. The affiliation of this specific feast with our modern Thanksgiving did not take place until much later. There are countless sources on the internet claiming to reveal the “true” Thanksgiving, but the story we have been indoctrinated with was actually cherry-picked for a reason.
THE FULL STORY
The most egregious part about the widespread internalization of the “first Thanksgiving” story is the erasure of the Native American experience at the hands of white settlers.

The New York Times wrote, “These [Thanksgiving] stories were among the few appearances made by Native Americans in popular historical narratives, effectively erasing history-altering crimes… from the country’s consciousness.” Virtually, the only story that features indigenous people in mainstream culture is the Thanksgiving narrative. For that narrative to be a story about a good-natured feast with white settlers is a thoroughly misleading image of our history.

This story rose to fame because it is the narrative that makes the majority culture feel the most comfortable. It reinforces an inaccurate idea of “well, not all the settlers were bad!” The “first Thanksgiving” is not representative of how Europeans treated indigenous people. Whether or not any particular group of settlers enacted physical violence on Native Americans they were still complicit in a system of colonization that completely crippled an entire continent of people.
NOT WITHOUT HOPE
But indigenous people are still here. Native Americans are here and they are speaking, as indigenous people have been doing since before European colonization. So we should listen to their stories, to the pain, and we should let that prick our hearts—during Native American Heritage month and every month after. With that learning, we should then follow in the footsteps of our indigenous neighbors with the goal of decolonizing Thanksgiving.

“Thanksgiving day is a reminder of the genocide of millions of Native people, the theft of Native lands, and the relentless assault on Native culture,” says the United American Indians of New England. They have protested on Thanksgiving day every year since 1970 at Plymouth Rock by observing a National Day of Mourning. “It is a day of remembrance and spiritual connection as well as a protest of the racism and oppression which Native Americans continue to experience.”

But some indigenous people believe Thanksgiving is not a lost cause and have found ways to decolonize the holiday, whether that looks like cooking traditional food, having an intentional time of remembrance for their ancestors or simply enjoying family.

This is not “rewriting history” or “revisionist.” The story of the United States has most commonly been told from the perspective of the colonizers, not the colonized. Looking at a story from a different character’s point of view can appear to be a different story altogether, but in order to fully grasp history, we need to acknowledge the truth.
THERE IS GRACE
For many, both indigenous and non-indigenous, the beauty of gratitude and gathering with family and friends over good food is worth putting in the work to teach the truth and reframe the holiday. With deliberate effort it is possible to redeem it through a process of unlearning and relearning.

Decolonizing Thanksgiving requires honoring and celebrating indigenous people. We can learn so much from the Native American experience, and we should take our cues from those who can point us toward a better way.