An inside look at what it means to teach film students over Zoom. 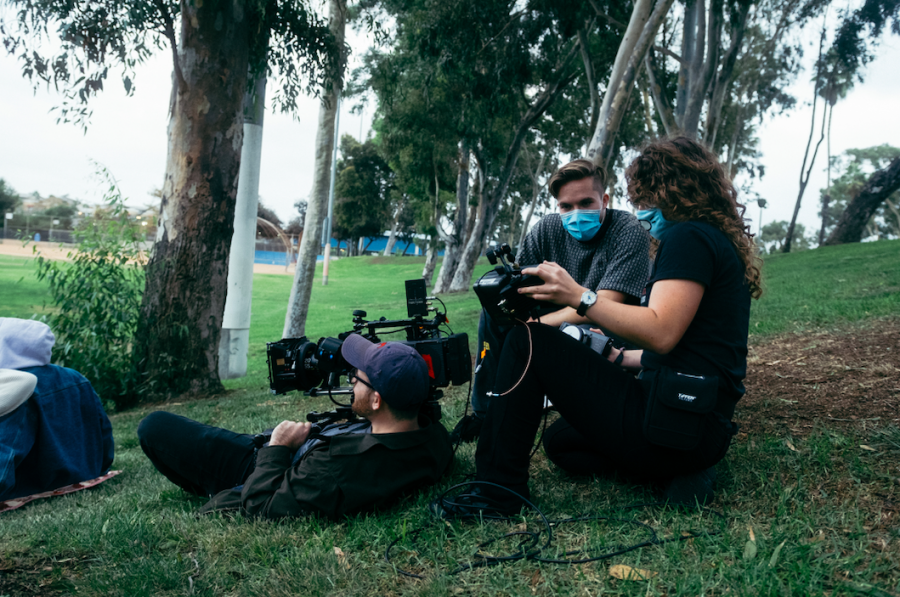 Dean Yamada is the professor teaching Biola film this year, a six-unit class whose final assignment is a film project that is selected the previous semester. Because of COVID-19, the format for this class has changed, meaning that the films audiences can expect will also look different. Here is an inside look from the Yamada, the man who is leading the charge for this project.
Can you tell me a little bit about the Biola film project and how it fits into the overall curriculum for cinema and media arts students?
Dean Yamada: “Biola film is a six-unit class and it’s a hands-on experience, so it gives students a chance to collaborate as a team and to learn skills in their specific positions they would be in the industry. What happens each semester is that students submit their script for consideration, and they also submit their directing reels. Finalists are chosen for both scripts and for directing reels, then finalists pitch their projects and we pick one project to fund for the following semester. So, basically, the film that is shooting this weekend was picked last spring in a pitch. That’s how the whole process works.”
What’s the film shooting this weekend?
Dean Yamada: “This semester is a little bit more unique than our past semesters. The film that we’re shooting right now is called ‘Seasons.’ It’s a coming-of-age story that deals with two high schoolers that are close friends and one feels a little bit stronger romantically about the other.

We’re also shooting a second project, which has never been done before, and this one is called ‘Virtually the Same.’ This project is actually for the other half of the students in the class that are not in the California area. These students are all over the country and they’re actually producing a virtual film. It’s going to take place over a Zoom format. They’re kind of reconstructing— it’s going to look kind of like Zoom, but they’re going to shoot it with different cameras and reconstruct it in post-production. That film is about an African American woman who has married a Caucasian man and it’s her and her son interacting with her in-laws over Zoom.”
Why were there two projects chosen this semester instead of just one?
Dean Yamada: “We wanted to give our students the best experience this semester because with things going remote and with Biola film being such a hands-on experience, we knew that it would be difficult for those students who are in Washington or Baltimore or wherever to have a hands-on experience. This is hopefully giving them a better opportunity to participate in something that they would like. Whereas, the local students are able to still get together and shoot this weekend.”
Did the criteria for choosing the film change?
Dean Yamada: “Not too much, [it was] still based on the story, still based on budget and doability. It still had to be a project that could be shot under quarantine conditions. That meant not having a lot of extras, not having a lot of public spaces, things like that.”
Do you think that there are any benefits to shooting remotely rather than in person?
Dean Yamada: “So, pre-production takes place purely remotely, which has its own challenges for all of us. But, ironically, the remote format for Biola film has been strangely rewarding because students have been very engaged, and gave a lot of feedback on the script. We had lots of honest conversations about where this project was going and what it was going to be. So, in some ways, learning remotely sort of galvanized us, and allowed us to come together in a way that I haven’t experienced before in another Biola film. It was rewarding for me to be honest with each other, critique each other and give feedback because they were all passionate about making the best project and overcoming the circumstances.”
How has this class been going for you? Do you notice a difference as a teacher?
Dean Yamada: “As a teacher, kind of  just what I said, it’s been an unusually rewarding semester teaching it. I’ve been able to engage with my students as we discuss the script and story. It is different than teaching in person because in person we have a lot more interaction, some different ice-breakers. In this format, I talk about things that resonate with me, I’ve switched the content of the class to talk about things that are important to me or that I love. For example the first class, I had the students sit in silence and meditate and reflect on their lives and on scripture—just disconnect for a little bit. I think that that’s important for Biola students to do. Then, in another class, we talked only about this book called ‘Creativity Inc.’ by one of the Pixar founders. [We] got to talk about collaboration and honesty and that set the stage for conversations that we had later on in the class.”
Why have you chosen to make class more personal?
Dean Yamada: “[Because] it’s a different format. Being remote, maybe it is a little looser. As faculty, we are trying new things. We all have to stay sane in our own ways—it just makes me want to try new things.”