Justice Amy Coney Barrett should not be on the Supreme Court 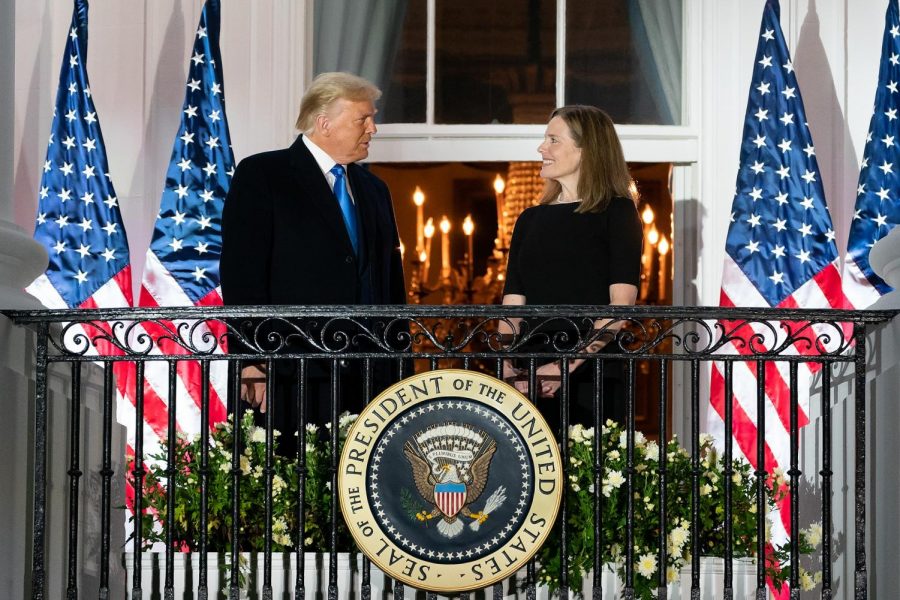 In one of the fastest confirmations in American history, Justice Amy Coney Barrett was nominated as the ninth justice to the Supreme Court on Oct. 26. Regardless of the fact that the justice seat left by the late Ruth Bader Ginsburg should not have been filled this close to the presidential election, what’s done is done. For many questions during her confirmation hearings, she refused to give a straight answer, often saying that she was not in a position to respond to hypotheticals, but a simple look at her past will give us sufficient evidence of her political leanings.

Her confirmation is not good for our nation because lack of experience leaves us to conclude that she was chosen simply for her conservative political ideals, and that is blameworthy. The position of Supreme Court justice should not be compromised in this way.
PERSONAL HISTORY
Justice Barrett grew up going to Catholic schools and graduated with honors from both Rhode’s College and then Notre Dame Law School. She and her husband have seven children, two of whom are adopted from Haiti, and their youngest biological son has Down syndrome. These achievements prove she is undeniably hard-working, well-educated and dedicated to her work. However, they wouldn’t qualify anyone to be a Supreme Court justice.

It was her work under the renowned conservative Justice Antonin Scalia that, she says, shaped her to be who she is today. Justice Scalia was a huge proponent of approaching the law through an originalist lens, which simply means, according to author and professor Randy Barnett of Georgetown University, that a justice cannot “change the meaning of the Constitution. They have to follow what it says the way they would follow the words of a statute.” After clerking with Scalia she taught at Notre Dame Law School for 15 years, and it was here that her conservative stances on different issues came to light.

So, Barrett approaches the law with an understanding that only amendments, not interpretations, have the power to change the Constitution. The opposite approach to originalism would be “modernism” or the belief in a “living constitution.” Justice Ginsburg ascribed to this view, saying, “The great thing about our Constitution, is that like our society it can evolve.” Our Constitution needs to be able to evolve as our country does, as there is no way its authors could have accounted for our modern society, which is why Justices should take this view.

A few other conservatives on the court also take the originalist approach, so Barrett will be in good company. As such, her nomination tilts the highest court in the land to the political right.
LACK OF EXPERIENCE
Barrett is woefully unqualified for her position. Compared to previous justices, she is objectively inexperienced.

Most of her professional experience has been as a professor of law. She was only a judge in the 7th U.S. Circuit Court of Appeals when President Donald Trump put her there in 2017, and even during those nomination hearings when she was asked to name 10 notable cases she had worked on, she could only name three. Before then, she had “never been a judge, never worked in the government as a prosecutor, defense lawyer, solicitor general, or attorney general, or served as counsel to any legislative body.” All of those are positions usually held by Supreme Court nominees.

In addition, the pro-bono work she chose to emphasize during that 2017 hearing was the work she did with her family at Angel Tree, which does not even qualify officially as pro-bono.

She was clearly not chosen for her experience in law. For this reason, she is not a good fit for the Supreme Court. Justices should be some of the best judges in their field or should have impressive and robust resumes in law. By nominating someone with subpar qualifications, the Trump administration has effectively lowered the bar for future justices.
A BIASED COURT
Since Justice Barrett was nominated solely for her political leanings, we now have a biased Supreme Court. The highest-ranking court in the country should not lean left or right. It should be balanced and fair, representing all the people of the United States equally. The conservative bias puts them at an advantage, and should Republicans win the White House and the Senate majority this year, that would give them an irresponsible amount of power. Our government would not reflect the people. According to the Pew Research Center, there are more registered Democrats than Republicans, and for the minority to hold that much power in our government is simply unfair.
IN CONCLUSION
Trump was in his full right to nominate a judge, though it was arbitrary due to the fact that the election was already in full swing when they rushed through Barrett’s confirmation. But, he could have picked someone with more experience. He could have chosen a different, more highly qualified woman to uphold the high standard of the Supreme Court. His choice reflects his priorities: just fill the seat so we can change legislation. His concern is power, and that is not in the best interest of the American people.