Over 80,000 residents of the Orange County hills were recommended to evacuate as brush fires threaten their homes. 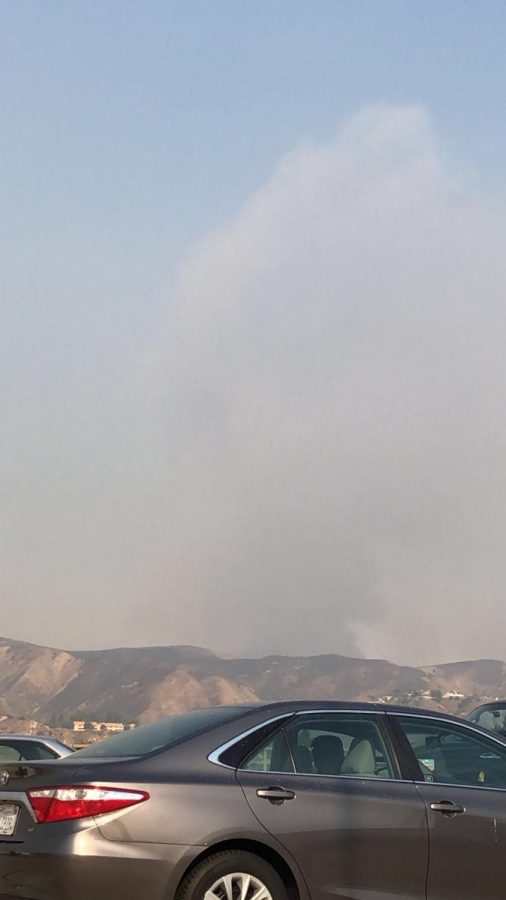 Photo by Jayne Bickford // THE CHIMES

“I’ve never seen anything like that,” said sophomore business major Noah Munivez. “Just piles and piles of smoke and seeing the embers go right past my head. There were some embers and ash and some of the debris that was coming. I thought they were birds in the sky.”

Munivez, like many others, was shocked to witness a wildfire start right in his backyard. The Blue Ridge and Silverado Canyon fires began their course of destruction on Monday, evacuating over 80,000 residents, including Biola students in the surrounding areas, by Tuesday, Oct. 27.
FIREFIGHTERS
Over 1,000 firefighters were deployed during the course of two days to fight the Blue Ridge Fire while 750 are battling the Silverado Canyon Fire close by. Yesterday, two of those firefighters were critically injured with second and third-degree burns, ABC News reported.

“It was unbelievable how fast these firefighters were up to respond to these fires and how they were fighting it,” Munivez said. “There was an unbelievable amount of firetrucks in our neighborhoods and in neighborhoods we could see where the fire was actually coming over the hill.”
EVACUATION
Students living in Yorba Linda and Irvine were getting ready for a normal day of Zoom classes when the fires picked up. Munivez, however, had to jump into action and help his family once the fires hit.

“My dad was actually on a walk, and this was around 11 o’clock, and all of a sudden I’m like why is fog coming in, and I start smelling smoke,” Munivez said. “I had to skip all my classes because I had to go help my uncle and we watered down his backyard.”

Although flames licked the edge of residential areas, most people faced heavy smoke and ash in and around their homes.

“When I woke up this morning even our bathroom window was kind of cracked open and our bathroom was just like ash all over the floor,” said freshman pre-nursing major and resident of Yorba Linda David Brown.

Many families near the fires have not been forced to evacuate yet, but will have to if the fires continue to spread around the hills.

“Right now I don’t see us evacuating just because there hasn’t really been any more updates on that side of the fire, but it could be possible if it starts moving downhill towards us,” Brown said.


A HISTORY OF FIRES
Orange County residents are not unfamiliar with blazing forest fires. Yorba Linda residents often vividly recall the 2008 fires and wonder if history will repeat itself, according to Brown and Munivez. Brown recalls the 2008 fires that devastated homes across his city.

“I just remember it was really bad and my older brother has severe asthma, so I think we had to take him to the hospital. So, yeah we’ve been affected by fires before,” Brown said.

Munivez also looked back on fighting the 2008 fires in his uncle’s backyard. The hillside behind his house went up in flames and although those fires were 12 years ago, he said the scene still feels familiar today.

“I was talking to the neighbors yesterday and all the neighbors were saying, as we’re watching this fire go over the mountain, ‘it’s 2008 all over again,’” Munivez said.