The recent turmoil has caused much destruction and threatens the lives of many Christians. 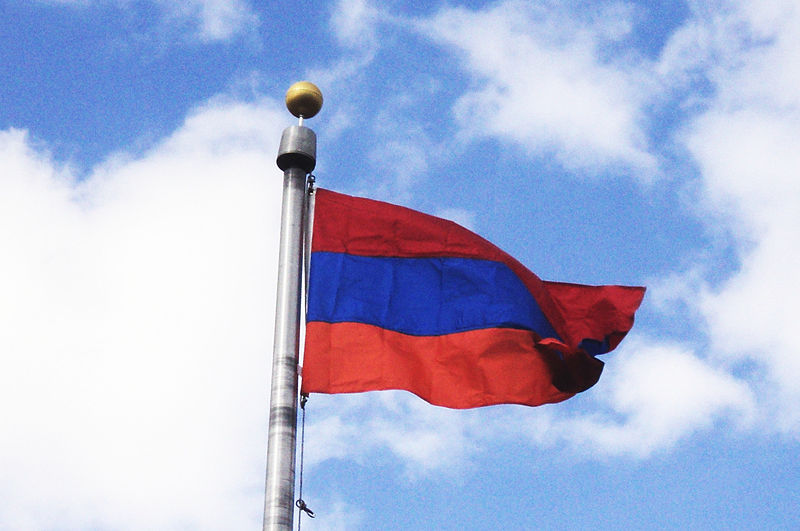 Over the past few weeks, the small country of Armenia has caught the attention of the news media. A handful of Armenians shut down the 101 freeway in Los Angeles, holding the red, blue and orange stripes that represent the Armenian flag two weeks ago, while Kim Kardashian West shared a series of tweets regarding the conflicts that plague her people.

Since the start of the war this September, over 400 young Armenian lives have been lost, averaging at 20 years old, Al Jazeera reports. Most Armenians in Stepanakert have been forced to flee the beautiful city or hide underground in the face of Azerbaijani attacks. One of the most hurtful blows to the Armenian people was the shelling of Ghazanchetsots Church while journalists and children were inside. Lives have been lost on both sides of this conflict. As Christians, it is important to be aware of the dangers that Armenians face because we should stand with our brothers and sisters who fear their very existence is at stake.
HISTORICAL CONTEXT
Each Armenian you meet carries with them the heavy burden and grief that stems from the Armenian Genocide. In 1915, the Ottomon Empire, modern-day Turkey, launched a full scale massacre against the Armenian people primarily for racial and religious purposes, Armenia being a Christian nation while the Ottomans were Islamic. To this day, Turkey denies its history of genocide.

After decades of tension and war, bloodshed has erupted over a region of land called Nagorno-Karabakh. Long before Christ walked the earth, this land belonged to Armenia and was called Artsakh. The region now belongs to Azerbaijan, despite the generations of Armenians that remain in the area.
CARING AS AMERICANS
The world is watching the war in this region. Turkey, an Azeri ally, was accused of sending Syrian mercenaries to fight against Armenians in early October, which could be devastating for Armenian families living in the region, according to The Wall Street Journal. Time Magazine writes that President Recep Tayyip Erdogan of Turkey may just be involved in this geopolitical battle since Turkey wishes to reclaim their ancient Ottoman Empire—with Armenia standing in their way.

Many Americans do not realize that roughly $100 million of our tax dollars in the 2018-2019 fiscal year has been allocated to Azerbaijan. The United States should be wary in funding nations that can fuel terrorism.

There has been an increase of anti-Armenian sentiment by radical Azerbaijanis across the world. In Baku, Azeris shouted “death to Armenians” in the streets. In Israel, nine Azeris were arrested for beating Armenians after a protest. Even here in the United States, an Armenian school was vandalized in San Francisco, according to the San Francisco Chronicle.

Thankfully, there are some advocates for peace in the region who stand with Armenia. President Emmanuel Macron of France, together with President Donald Trump and President Vladimir Putin of Russia, have condemned the Azeri hostility, according to Bloomberg. As allies, these countries could play a vital role in saving many Armenian lives.
CARING AS CHRISTIANS
Another country involved in the Nagorno-Karabakh conflict is Israel. They have been continually selling drones and weapons to the Azeris as they shell Armenian villages, killing soldiers and civilians. Over the past year, Israel has imported over half of Azerbaijan’s arms, according to a research conducted by Stockholm International Peace Research Institution.

Many Christians tend to rally around Israel because of its rich history and roots that our faith stems from. However, as Christians, we must be prudent and wise as we discern the actions Israel is taking in this war. There are many Armenian students who attend Biola and these events of war and struggle weigh heavily on their hearts. Most of the Armenian soldiers killed are college-aged kids—just like us.

As a Christian nation, Armenia needs the support of Christians around the world. To many Orthodox Armenians, their faith is everything and the church is their family. At the very least, we can come alongside them, mourning their losses with them and praying for peace.
WHAT YOU CAN DO
Some may say peace will never happen in the Caucasus region. Just last week, Armenia and Azerbaijan agreed to a new cease-fire agreement—however, less than 24 hours later, it was breached, according to The New York Times.

I believe peace is always attainable, however, sometimes it is worth fighting to perserve your way of life and homeland from terrorism. Armenia stands to fight Azerbaijan and cannot back down. If it does, Armenia will lose hundreds of thousands of lives, and possibly many more.

Keep these events at the top of world leaders’ minds—you can join a peaceful protest, write letters to your representatives and donate when you can. Continue to study history and seek truth.  But most importantly, pray for your Armenian brothers and sisters. James 5:16 encourages us, “Therefore, confess your sins to one another and pray for one another, that you may be healed.” Pray that peace would reign in the region and no more lives would be lost on either side.