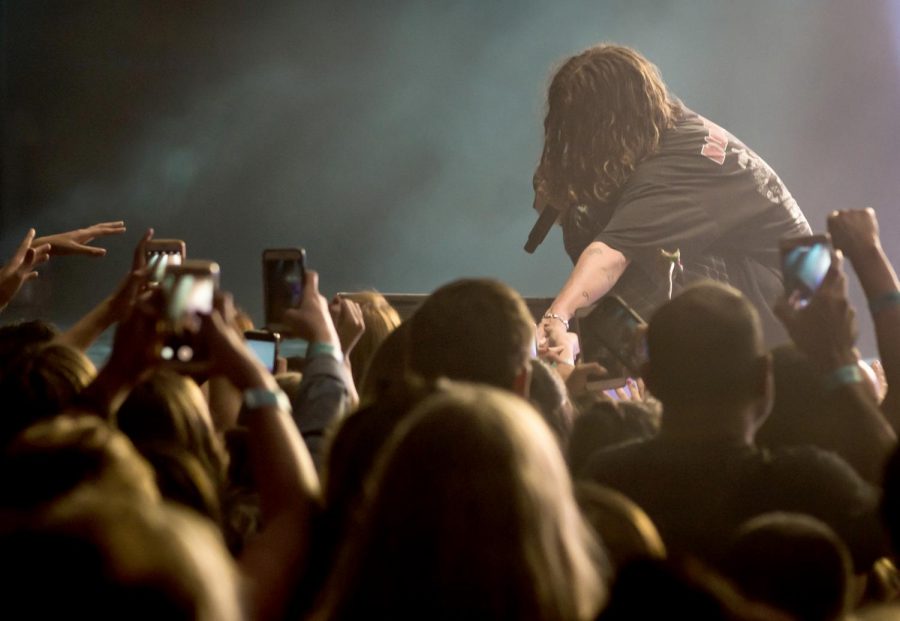 Raw honesty, tranquil vibes and an immersive experience are what listeners will find in “mama’s boy.” This follow-up to “Malibu Nights” brings back LANY’s iconic songs about love and loss, but introduces themes like hometown, family and religion. Each song on the album is enough to make listeners dance, reflect and even shed a tear all at once.
SUSTAINED SUBJECTS
LANY has always had a very unique and specific feel in their music. The alternative rock band maintains a peaceful, dreamy feel in every one of their songs. In addition, “mama’s boy” follows their classic theme of relationships and breakups in the lyrics. The album opens with “you!,” a charming hook that not only introduces the idea of a complementary relationship, but is enough to capture the interest of any indie music fan. One of the most upbeat tracks on the album, “heart won’t let me” is another highlight seen early on, reminiscing the feeling of being stuck in a relationship with the wrong person.

From there on, the album begins to transition into slower, sadder tunes. “Paper” is certainly a standout on the record, a tear-jerking homage to relationships that look good on the outside, but on the inside, nobody is happy. The soft guitar strumming and long, lingering synths throughout the song only contribute to the regretful feeling.

“They think we’ve got a perfect life / ‘cause they don’t hear us when we fight / so we look good on paper / then we fall apart later,” lead vocalist Paul Klein sings in the chorus.

With a peaceful atmospheric beat that accelerates throughout the song, “sharing you” comments on the feeling of deciding to commit to a single person and not wanting anyone else, with the lingering fear that they might not feel the same way. Klein becomes brutally honest in “sad,” perfectly articulating the feeling of wanting to hurt someone who has hurt you.
PERSONAL THEMES
In “mama’s boy,” Klein dives into some themes that are very personal to his own life and still relatable to many. His southern Oklahoma roots are evident not only in the album’s title and cover art, but also in a few of the tracks. “Cowboy in LA” demonstrates this the most clearly. Klein sings about how the culture of the place where he grew up impressed on his manners and the way he treats people, turning him into a standout southern gentleman in his current city of Malibu. This theme comes up again in the upbeat track “good guys.”

“I just wanna give you everythin’ / show you I’m a Southern gentleman,” Klein sings in the chorus.

In “if this is the last time,” Klein tackles the subject of the importance of family in his life. In this bittersweet tribute, Klein addresses each of his parents, thanking them for all they have done for him and apologizing for all the things he did wrong. The song carries the very lofty message that every moment in life is precious, so treat them as such to avoid heartbreak and regrets down the line.

Religion is another essential topic covered in the album. In “i still talk to jesus,” Klein confesses to the many sins he commits on a regular basis, and admits to the fact that he still talks to Jesus, though it may not seem like it from the outside. Even singing, “Hallelujah, amazing grace,” in a portion of the song, Klein expresses that though he recognizes a desperate need for salvation, his way of life remains the same.

“(What i wish just one person would say to me)” and “nobody else” close out the album with similar messages of recognizing the importance of having people in life to care for and who care about you. Material things and success will come and go, so it is important to appreciate those who have been there through it all. These calming, appreciative ballads conclude the emotional, heartfelt journey of “mama’s boy” that is worth many listens.