With action and wit, Millie Bobby Brown shines as the sister of the famous literary icon, Sherlock Holmes. 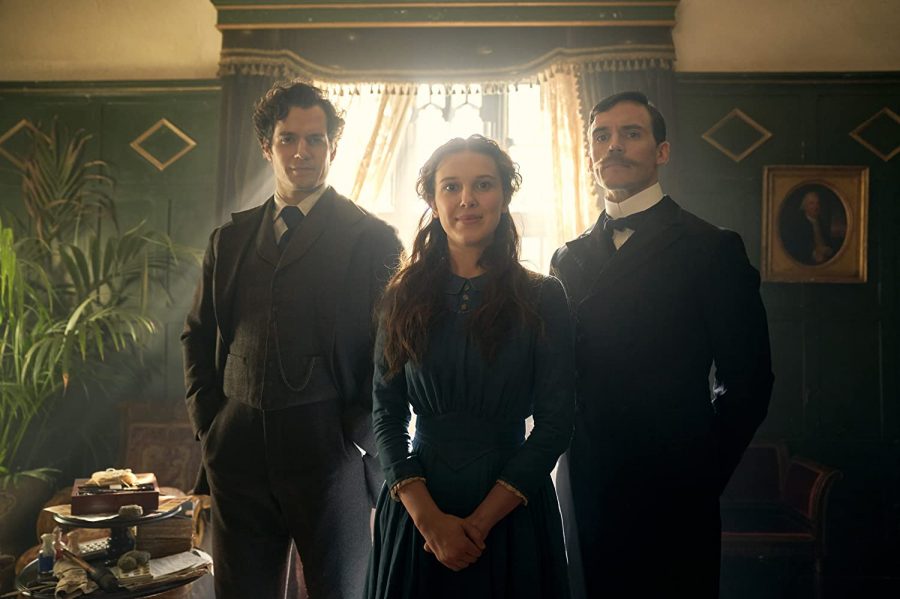 “Enola Holmes” is the perfect film to begin the Halloween season. This young adult Holmes story focuses on the quirky, irreverent Enola who seems to be capable of everything except fitting in among the rest of the women in 19th century British society. Raised by only her mother, played by Helena Bonham Carter, Enola is lost when she finds that her mother has vanished without a trace. Now in search of the only parent she has ever known, Enola uses her wit, intelligence and new-found conformity to society to uncover the mystery that has become her life—alongside Sherlock Holmes, portrayed by Henry Cavill.
NOSTALGIC MYSTERY
One of the most enjoyable aspects of “Enola Holmes” is the fact that it pays homage to the classic Sherlock Holmes mysteries, even featuring Sherlock himself. While so many of the reboots and retellings of the Sherlock Holmes mysteries feel drab, dark and tired, this story seems to give life to a classic series and present enough originality to keep the story relevant for both young adult and mature audiences. From iconic, violent scenes within a train to the historical setting, this film may have been geared toward teeangers, but remains sophisticated in its presentation, action sequences and cultural examination. With nostalgic nods to the classics and a new, intriguing storyline, “Enola Holmes” is an enjoyable and refreshing Holmes story.
FEMALE REPRESENTATION
Many of the previous retellings of Sherlock Holmes have been predominantly male, with Holmes and Watson taking the forefront and only a handful of small parts given to women. In “Enola Holmes,” both Enola and her mother take the forefront of the narrative, bringing plenty of positive female representation back to the story of Sherlock Holmes. While most famous for her role as Eleven in Stranger Things, Millie Bobby Brown is a funny, independent heroine, one who brings audiences along for a transformative, violent and often shocking mystery involving family and hidden secrets about the past.
ENSEMBLE CAST
This film includes a number of well-known Hollywood stars, bringing an assortment of favorites to the small screen. With such large names, this mystery becomes increasingly intriguing as more and more familiar faces appear on the screen as characters much different from their usual roles. With dry humor and a great deal of intensity, “Enola Holmes” provides a surprisingly well-acted story, one that challenges the typical cliché-ridden stories that often support young adult films.
TWISTS AND TURNS
Until the very end, “Enola Holmes” is captivating, not only because of its impressive design, but also because of its intricate, fast-paced storytelling. While many Holmes stories are slow burning tales of murder, this story focuses on mystery and puzzles that will have viewers guessing and working alongside Enola as she tries to follow her mother on the adventure of a lifetime. The constant suspense, epic adventures and persistent peril are certain to not only entertain audiences, but bring back a new love for a more mature, thoughtful story for young adults.
THRILLING FINALE
As “Enola Holmes” concludes, audiences are left with an exciting and ultimataley thrilling end to this feminist spin on the classic Sherlock Holmes stories. Intense, but not scary, this movie is the perfect fall film to stream this month for those in need of a chilling mystery. Streaming on Netflix, “Enola Holmes” is the perfect movie to watch from the comfort of your own home, with a cozy sweater and your favorite warm, fall beverage in hand.