“Bill And Ted Face the Music” is a fun, absurd ‘80s reboot

Audiences return to the bizarre time travel adventures that sustained the series since 1989. 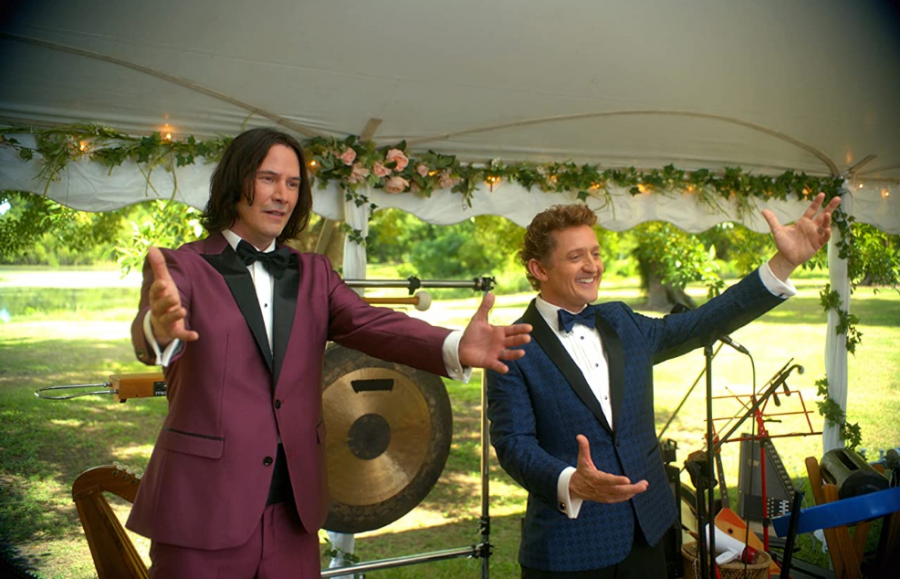 After the release of “Bill and Ted’s Excellent Adventure,” the dysfunctional duo returns for the third and final installment of the iconic ‘80s music-based series, starring Keanu Reeves and Alex Winter. With both nods to the past and plenty of updated references and scenarios, director Dean Parisot tackles time travel, family and the absurdity of the franchise in modern times in “Bill and Ted Face the Music.”
RETURN TO SIMPLER TIMES
The first installment of the series,“Bill and Ted’s Excellent Adventure” is known for its charm and ‘80s nostalgia. The story focuses on characters rather than gimmicks and special effects. The original brought to life both the hardship and levity of being a teenager and the adventure that comes with adolescence. While the original story was both lighthearted and easily a classic for its time, the series reboot is less than appealing and remains focused on the past, when it should be looking toward the future of cinema.
MEMORABLE CAST
The latest installment includes stars from the original film, “Bill and Ted’s Excellent Adventure,” as well as an additional lineup of familiar faces from modern pop culture and film, such as Keanu Reeves actor from “John Wick,” Kristen Schaal actor from “Bob’s Burgers,” Bridgette Lundy-Paine from “Atypical” and Jayma Mays from “Glee.” Pulling such a fantastic cast together is no easy task and these actors add to the charm and appeal of this third installment. Where the story lacks, these stars bring heart and humor to the absurd, confusing narrative of “Bill and Ted Face the Music.”
TIME TRAVEL
Time travel has always been the focus of the series. Once dedicated to presenting the oral report of a lifetime to now having the fate of the world in their hands, “Bill and Ted Face the Music” continues the tradition of time travel and raises the stakes for Bill and Ted as they strive to keep their marriages, protect their children and discover “a song that will reunite the world.”

While still a bit slapstick and muddled, this film is the perfect combination of “Zoolander” and “Back to the Future,” providing both thrills and a few one-liners to keep audiences not only rolling their eyes, but also captivated by the adventures of this memorable duo as they travel through space and time yet again.
HEAVY FOCUS ON RELATIONSHIPS
While the story is lacking and oftentimes dull, the adventure chaotic and confusing and the dialogue verging on annoying, this film succeeds in honing in on themes of love, family and relationships.

While the destruction of the world and even Bill and Ted’s daughters oddly being thrown into hell seems to take up most of the screen time, the directors make sure to add plenty of heart to the story, connecting what it means to make sacrifices for loved ones and the gravity of decisions made, both for one’s self and others. These redeeming themes may not make up for the nonsensical plot and painfully drab storytelling, but they do make the film easier to enjoy and more satisfying by the time the credits roll.
CONFUSED CONCLUSIONS
While lighthearted and possibly even a comfort-watch during this pandemic, “Bill and Ted Face the Music” is confusingly odd, completely bizarre and often lacking in humor. With so many famous faces and source material that was quirky, yet enjoyable, this conclusion to the series seems both unfortunate and a lackluster means of ending Bill and Ted’s famous friendship.