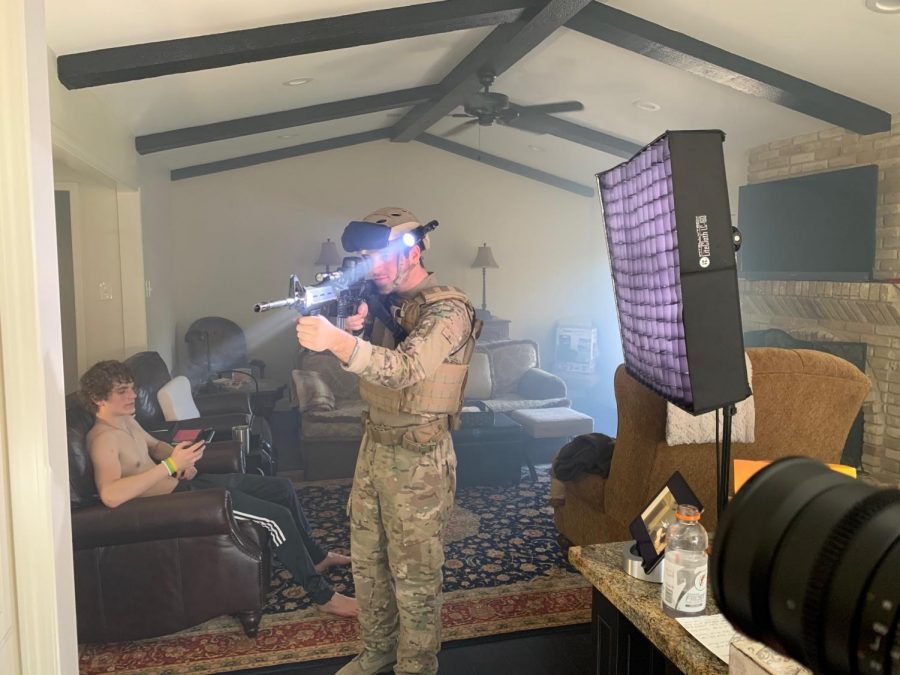 From seeking out family members as actors to shooting video on iPhones, film students have been forced to “make do with what they have.” In addition, some have had to bid summer projects adieu in hopes of returning to them in the fall. But the outcomes of quarantine have not all been negative. The limited equipment, space and collaboration allow filmmakers to problem solve, think creatively and change perspective.
DIRECTOR’S CUT
Students in the advanced directing class, taught by associate professor of cinema and media arts Dean Yamada, have the task of shooting a three-minute one-take short film for their final project. Without access to equipment and software in the Production Center, students have either had to use their smartphones or find a completely new way to shoot.

Junior cinema and media arts major Andy Brewster lives by himself on campus where he must rely on the few students still there to take part in his project. While the assignment poses a unique challenge for him, he sees it as a way to refine the details of his craft.

“It’s mostly just to be an exercise for blocking and directing and camera movement and less about making a cool portfolio piece or something that looks really really nice,” Brewster said.

For the project, senior cinema and media arts major Josiah Solis is collaborating with his hometown friend’s Las Vegas-based production company West Coast Visual FX, which will provide him with the equipment he would have needed to rent from the PC.

Before he set out for Las Vegas, Solis already had his story “La Medalla” in mind, which focuses on the reconciliation between a father and daughter.

Because he is highlighting a serious story about resentment and unity, he wanted to use resources that would do his story justice. West Coast Visual FX can supply Solis with cameras, lights, sound and camera rigs for the shoot.

“If I was going to shoot the film locally, I was going to work with some film students who are still on campus who would help produce it,” Solis said. “For the story that I want to tell, I think it’s best to utilize some resources that I have and that I know in Las Vegas, so I decided to go that route.”
MOURNING POTENTIAL PROJECTS
After the semester ends, Solis and Brewster look forward to pursuing other projects despite the uncertainty of the pandemic. Solis hopes to shoot his short film “A Brief Silence,” which depicts the story of a high school senior who finds out he gets accepted into his dream college the same day his mother finds out her cancer has returned. If COVID-19 guidelines are lifted and people are willing to collaborate in person, he hopes to shoot the project in June.

While Brewster is excited to pursue projects and network with others, he also mourns the loss of potential internships and opportunities.

“It’s been hard letting go of plans, I guess releasing that up to God’s direction,” Brewster said. “Especially for a lot of my junior classmates, this is a really important summer for us to have internships.”

Like Brewster, sophomore cinema and media arts major Graham Skinner has been reminiscing on what would have been. This week, he would have finished shooting a musical number called “Blue Cherries,” a period piece set in the early 2000s about kids growing up in Southern California. Having planned to shoot on the CBS Studio Backlot, he is hoping to resume the project in the fall.

“It’s breaking my heart reminiscing on all these projects that were supposed to have happened, but I’m excited because a lot of them are just going to resume in the fall,” Skinner said.
INNOVATIVE SPIRIT
Hailing from Dallas, Skinner has planned local projects for the summer, one of which is a documentary about his grandfather. In the ‘80s, Skinner’s grandfather became a successful orthodontist who took up plane flying as a hobby. One day, as his grandfather was flying to East Texas, his engine stalled, resulting in a crash that left him paralyzed from the waist down. With great resolve and grit, Skinner’s grandfather decided he would walk again. Today, he walks with two canes.

In the coming months, Skinner hopes to interview his grandfather for the documentary, but he doesn’t know when because of the coronavirus guidelines. Until then, he has been working with the resources he can cut to include in the project. As of now, he is developing old photos from his grandfather’s old film camera.

“Life is short,” Skinner said. “You got to get these stories told before it’s too late.”

Like Brewster and Solis, Skinner sees the pandemic as a means to exercise creativity and take stock of what he has. A few weeks ago, he shot short film “Rookie” in his house with his brother as the protagonist. Because the story centered around a special operations soldier in search of a bomb, Skinner realized he could use his brother’s old airsoft equipment as costume.

“At Biola, we have an amazing facility with top-of-the-line equipment that Hollywood films are being shot with,” Skinner said. “Being removed from that just for a season has really been a good way of exercising creativity and problem solving.”